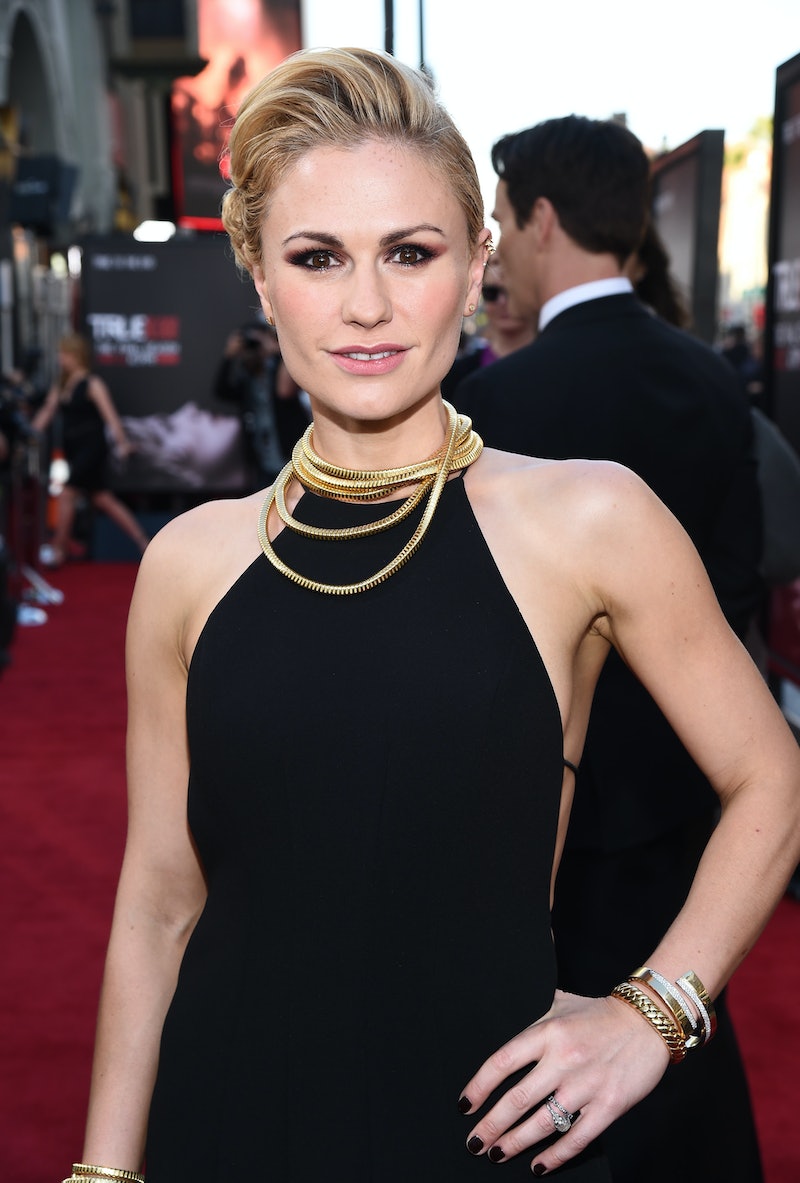 Seriously, all I can say after watching this episode of Larry King Now featuring Anna Paquin is: PREACH. The True Blood star appeared on the program to promote the final season of her HBO vampire drama, which is wrapping up after a whopping seven seasons on the air. Instead of talking about the show for all allotted 27 minutes, however, the actress and Larry King got into a conversation about Anna Paquin's bisexuality — specifically, King couldn't seem to comprehend the fact that, despite Paquin being married to her True Blood co-star Stephen Moyer (who is a man and who she has the most adorable relationship with), she still identifies as a bisexual woman because that is her sexuality. Seriously, take a look at their conversation, transcribed from the episode:

King: Are you a non-practicing bisexual?Paquin: Well, I am married to my husband and we are happily, monogamously married.King: But you were bisexual?Paquin: Well, I don’t think it’s a past-tense thing.Larry King: No?Paquin: No. Are you still straight if you are with somebody, and — if you were to break up with them or if they were to die, it doesn’t prevent your sexuality from existing. It doesn’t really work like that.

BAM. Paquin really couldn't have put this in simpler terms. Unfortunately, after her statement, King still doesn't seem to really get it — as Salon points out, after Paquin finishes her last sentence, "King cut her off, telling her to 'stop with wishful thinking,'" which is insane and I'm shocked Paquin was able to keep her cool — but I'm happy that Paquin's words were given such a platform to hopefully school viewers and others on the Internet on what exactly bisexuality is — which is to say, a sexuality.

It's grossly untrue to assume that bisexual people stop identifying with their own sexuality at some point, or somehow turn straight just because they enter a monogamous relationship with someone of the opposite gender.

Considering those who identify as bisexual often receive criticisms or judgment that they're "faking it for attention" or will eventually marry someone of the opposite sex, this isn't the first time Paquin has faced similar questions to King's: During a HuffPost Live interview recently, a tweet that Paquin posted during pride month was brought up:

When Paquin was asked why she posted it, she had the following to say:

There's people that are going to go to their grave thinking what they think about the LGBT community...That's their problem not mine. And there's people that think that monogamy and bisexuality are mutually exclusive. Again, their problem not mine. The reason I feel like it's important to talk about this stuff is that the more normal and, frankly, mundane and boring this stuff becomes the better it's going to be for everybody who is part of our community.

Badass. In literally five sentences, Paquin has sonned literally everyone who refuses to learn more about what it means to be bisexual, while simultaneously articulating the point completely. All that's missing is some of her badass Sookie Stackhouse faerie light, really.

You can check out Paquin's interview on Larry King Now below. The final season of True Blood airs every Sunday on HBO at 9 pm.