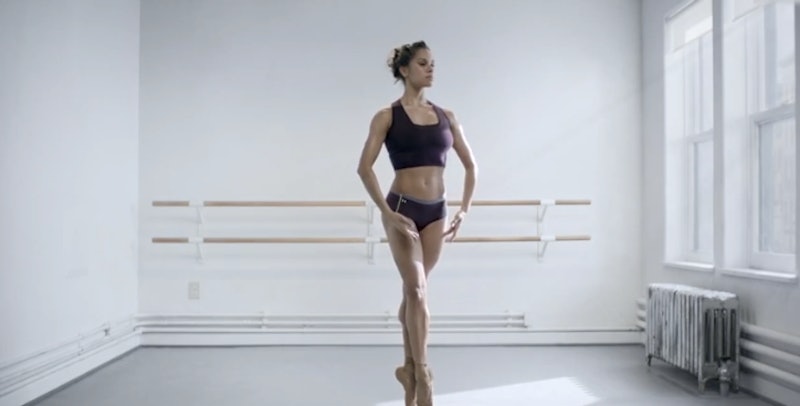 On Wednesday, athletic wear mega-brand Under Armour launched the "I Will What I Want" campaign at a press event in New York City. The campaign focuses on womenswear and stars an array of impressive female athletes including downhill skier Lindsey Vonn, soccer player Kelley O'Hara, and — most surprisingly — American Ballet Theater soloist Misty Copeland.

Under Armour launched in 2006 when founder and CEO Kevin Plank, then a football player at the University of Maryland, headed to New York City with the goal of making better t-shirts for his fellow (male) athletes. Plank knew nothing about fashion except for this: "If I'm going to make t-shirts," he told those of us at the launch, "I have to go to the Garment District." He did, and thus Under Armour was born.

"I Will What I Want" is primed to be something big for the brand. Although they have catered to women for many years, this is the first campaign that truly sheds Under Armour's bro-tastic image in favor of something more female-friendly but certainly not "soft." Spearheaded by Leanne Fremar, executive creative director of women's apparel, "I Will What I Want" places Under Armour in a position to compete directly with brands that are favored by women, like Lululemon. But, in true Under Armour fashion, the campaign still kicks ass.

The first TV spot of the campaign really drives the "I Will What I Want" message home. It features Misty Copeland, who has become the second African American soloist in American Ballet Theater history after being told throughout her childhood that she was too short and too full-figured for a career in ballet. In the video, Copeland dances beautifully (in Under Armour, natch) while a voiceover of a young girl reading a rejection letter from a ballet school plays in the background. As a former wrong-for-ballet dancer myself, the video almost made me start sobbing in a room full of colleagues. It's not often that an advertisement has that kind of effect on me.

"I Will What I Want" embodies the idea that women don't need permission to make their dreams come true, whether that dream is to be the best downhill skier in the world or to get to a Zumba class after work. It's a powerful message, and one that Under Armour illustrates to great affect.