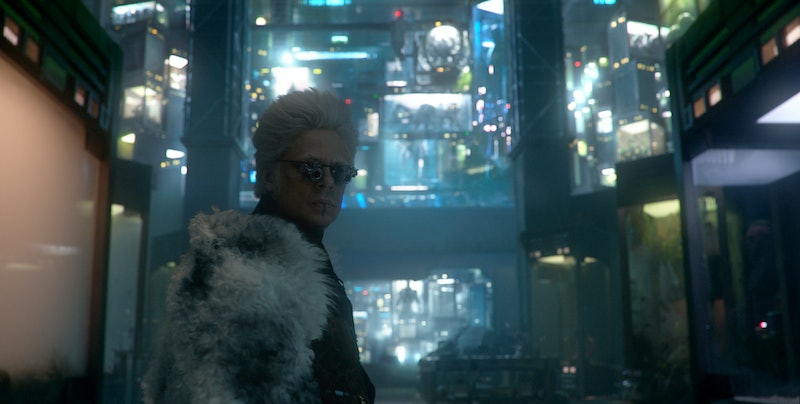 Although I don't usually like the idea of "spoiler alerts" with their all-consuming fear of revealing insignificant plot details, it's necessary for the Guardians of the Galaxy, so I'm willing to make an exception this time. If you want the unbridled joy of viewing a surprising, unspoiled moment after the Guardians of the Galaxy credits roll, stop reading and destroy your Internet device right now. I'm about to give away the best Marvel Studios post-credit scene since the Avengers ate shawarma.

The Guardians movie itself was a delight, injected with camp and filled with beautiful psychedelic scenes that hearkened back to the hippie Marvel days. After the seemingly endless credits were finished, though, a delightful and completely unrelated surprise awaited: an encounter with Howard the Duck. Yes, I mean that Howard the Duck, the one who starred in a live-action movie in 1986 that has earned a mere 14 percent on Rotten Tomatoes.

After Cosmo the space-dog licks The Collector's face, Howard proclaims "Why do you let him lick you like that... yuck!" Of course, this line is delivered with his characteristic swagger and with a cocktail in hand, but the appearance of a well-made CGI Howard the Duck is a delightful end to a Marvel film. The cult of Howard comics fans had thought Hollywood had given up on him for good.

Since the post-credits scenes are often used to tease new standalone films, there has been some speculation that Howard will be a future Marvel Studios project. Personally, I'm skeptical. While a tongue-in-cheek rendition of Howard's original and early adventures could be funny, Marvel's commitment to an integrated cinematic universe suggests that this was a one-off. Although Howard's comics are a part of the larger Marvel timeline, his planet of anthropomorphic ducks is relatively closed off from the rest of the multiverse, since they exist in a separate dimension. Explaining this to uninitiated moviegoers is a stretch, even for the now-intergalactic Marvel Studios.

Howard could provide some levity and adult humor to Marvel Studios' offerings, but it's unlikely that his jokes will get him a film in the already-crowded cinematic universe. Peter Quill has already done some great work in the one-liner department, so let's not get our hopes up that Howard the Duck will assume the Marvel comedy throne.

More like this
Everything You Need To Know About The 'Knives Out' Sequel
By Grace Wehniainen
The 'Hocus Pocus' Sequel Finally Has A Release Date & It Makes Total Sense
By Shannon Barbour and Radhika Menon
Everything To Know About 'The Hunger Games' Prequel Movie
By Grace Wehniainen and Radhika Menon
Does Umbrella Academy Season 3 Have A Post-Credits Scene? The Answer Will Surprise Fans
By Brad Witter
Get Even More From Bustle — Sign Up For The Newsletter