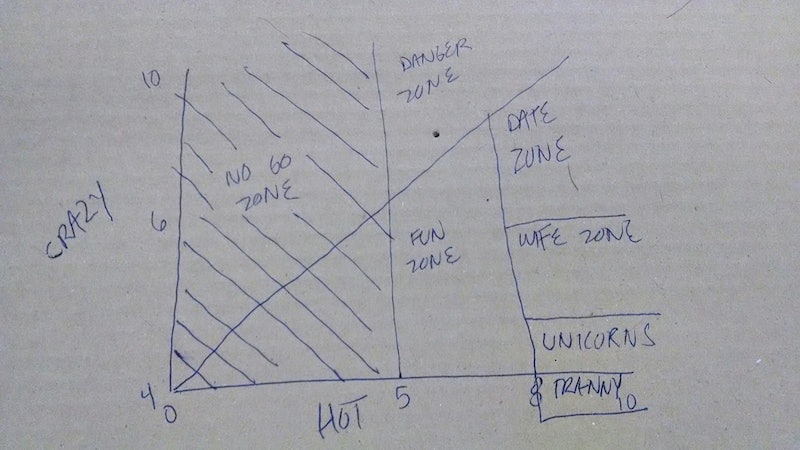 Want to get inside the male brain for a minute? Let me rephrase — want to step inside the brain of one particularly sexist and simple-minded man for a minute? Because to say that the brain of Dana McLendon, the dude who came up with the "Universal Hot Crazy Matrix: A Man's Guide to Women" that is currently circling the Internet, encompasses the mindsets of all men would be as idiotic as him thinking his silly little graphs encompass the reality of all women.

McLendon draws his matrix, which he describes as containing "everything a young man needs to know about women," in a video posted to the YouTube account for a man named James Yaegar on behalf of an organization called Tactical Response. It says that all women can be charted on a Cartesian graph with an X axis for level of hotness, measured on a 1-10 scale, and a Y axis representing level of craziness, measured on a 4 - 10 scale because "of course there's no such thing as a woman who's not at least a four crazy!" Oh, Dana. I hate you.

After explaining how exactly men should navigate this graph, McLendon goes on to draw another matrix that echoes the delightful trope that women will only consider marrying guys who are rich. The hits just keep on coming from this guy!

Tactical Response, by the way, is an organization that teaches "the mindset, tactics and skills to prevail in a violent confrontation" to students "regardless of age, gender, occupation or race." I appreciate their open-door policy, and I plan to take advantage of their services and then use my newfound skills to kick Dana McLendon's ass. Does that make me crazy??