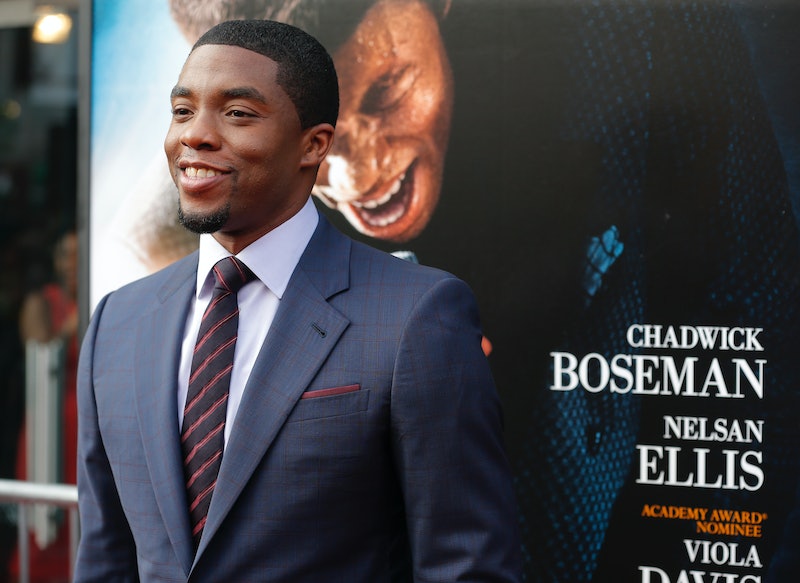 The highly anticipated James Brown biopic Get On Up opens in theaters today, and its star Chadwick Boseman is already receiving Oscar buzz. According to the film's director, Tate Taylor, Boseman's portrayal of "The Godfather of Soul" "makes [him] think of De Niro in Raging Bull ." Considering De Niro took home the Best Actor Academy Award for that performance, this comparison shouldn't be taken lightly. Boseman may not be a household name yet, but this is not his first biopic rodeo. Here's everything you need to know about him.

1. He's been in two sports dramas

Boseman's biggest role before Get On Up was playing baseball player Jackie Robinson in the biopic 42 last year, and earlier this year, he played Ohio State footballer Vontae Mack in Draft Day. Boseman's plays basketball in real life, so I can only assume he'll fulfill the cinematic sporting trifecta by appearing in a basketball flick. Clearly the dude is an athlete, which probably helps him with this next point...

Besides having one of the most distinctive voices and styles to hit the funk scene, James Brown also had an arsenal of killer dance moves. Don't try his jump-to-split move at home, unless you're Boseman. Cut to 2:18 in the film's trailer for proof that he's got the moves. YOWCH.

His hip-hop inspired play Deep Azure was put on at the Congo Square Theater Company of Chicago and called a "fascinating verbal feast" by the New York Times.

At 32-years-old, Boseman is already a bonafide movie star who has mastered the splits. Not too shabby.

6. He cleans up real good

7. And he's got a million dollar smile

In conclusion, I don't know about you, but I'd happily shell out $12 to watch this guy do the splits.