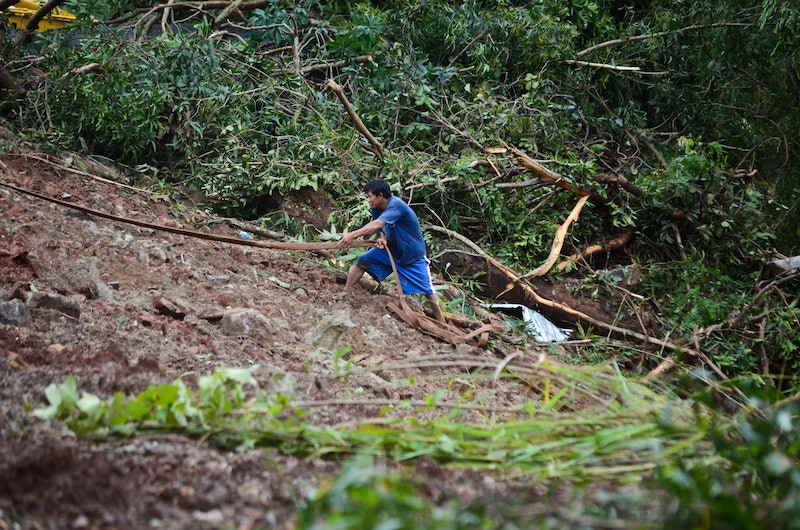 On Saturday, the heavy summer monsoon season led to a lethal landslide in Nepal that has killed at least eight people. A reported 40 more are injured (several of whom were airlifted to Kathmandu for treatment), many more are missing, and dozens of homes, businesses, and other structures were buried in the disaster. Thousands of people have evacuated because debris from the landslide could cause flooding. And it could get still worse: Rescue operations are ongoing amid fears of flash floods. Officials expect the numbers of dead and injured to keep rising as debris is cleared.

The landslide in the Sindhupalchowk district, 37 miles from Kathmandu, was sadly not unexpected. While the monsoon season is on one hand welcomed by farmers throughout the region, it is also responsible for multiple deaths annually due to the floods and landslides caused by the sudden, heavy rain. Still, because of its location, Saturday's disaster may have larger implications than officials expected. The landslide not only buried homes but also blocked the Sunkoshi River, which could have implications as far as Bihar, India.

"The landslide has caused huge damage. We cannot make any estimates of the number of deaths now. We are looking for other people who might be trapped," a police officer involved in the rescue effort told Reuters on Saturday. The dam caused by the landslide, which has resulted in a nearly 2-mile-long artificial lake, proved too difficult for first responders to dismantle by hand, and large equipment was initially impossible to call in due to the flood's blocking the main highway. That road, which connects Kathmandu to the Tibetan border, has been officially closed by the government and the whole region declared a "flood crisis zone."

Foreign ministry officials in the Nepalese government have been asked to request China and India for help clearing the dam. But for now, rescue efforts are in the hands of the Nepalese army, which has begun using controlled explosions to destroy the pile of debris gradually. It may be faster to try to blast the whole thing away at once, but on top of being more dangerous, that approach would be more likely to lead to even more flooding. The controlled blasts should keep water from rushing in with more force than the river's geography can handle. "It is very serious," said Nepal's army spokesman. "We are very much concerned about the consequences if it causes massive floods."