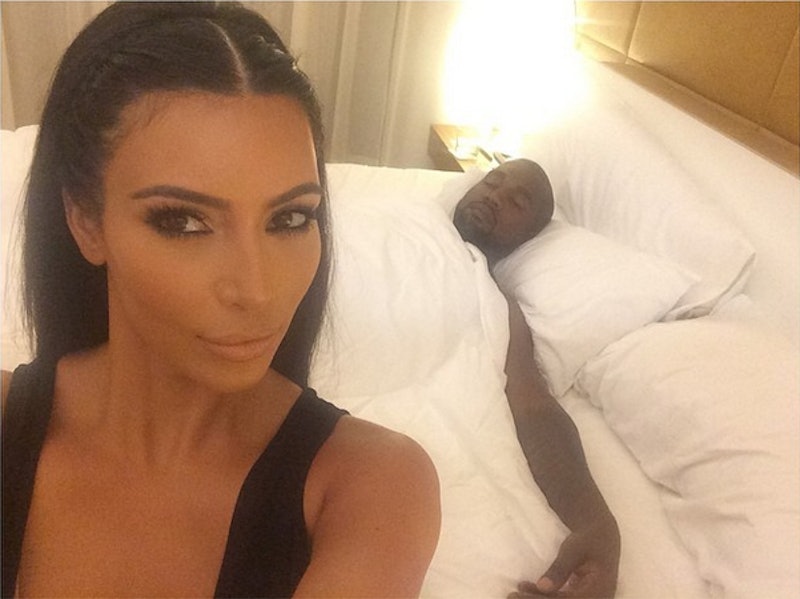 Kim Kardashian, her sisters, Kanye West, and Justin Bieber have been partying in Ibiza, Spain this weekend, and as usual, it's a well documented occasion. Usually, the newly-married reality star's Instagram is full of selfies, so it wasn't at all surprising when Kim Kardashian posted a bedroom selfie of a sleeping Kanye West in their hotel room on Saturday morning — but it was a little surprising when you scrolled down to see what the photo is captioned. It reads, and I quote: "Side chicks be like..."

Right. So, considering Kim is definitely not a side chick to West in the eyes of the U.S. Government, I think it's an attempt at Instagram humor — but I'm pretty confused about what it means.

Of course, some have speculated that this is a reference to the potential existence of Kanye's side chicks. However, this would be a weird thing for Kim to post about. I think Kim is making fun of the sort of smug post that a "side chick" might be inclined to post, especially if they found themselves in bed with her famous husband.

Then again... Kim's Instagram is many things, but it is rarely funny.

There's also a level of hypocrisy to this post. Isn't she, Kanye's wife, posting the exact same kind of possessive, smug post that she's accusing the side chicks of posting? Like, the subtext could easily be interpreted as a simple, territorial "back off."

Or, at least that's what I think she's doing. It's pretty hard to tell if her selfie face is mock smug or real smug. I wonder what Kanye had to say when he woke up; hopefully he got the joke.