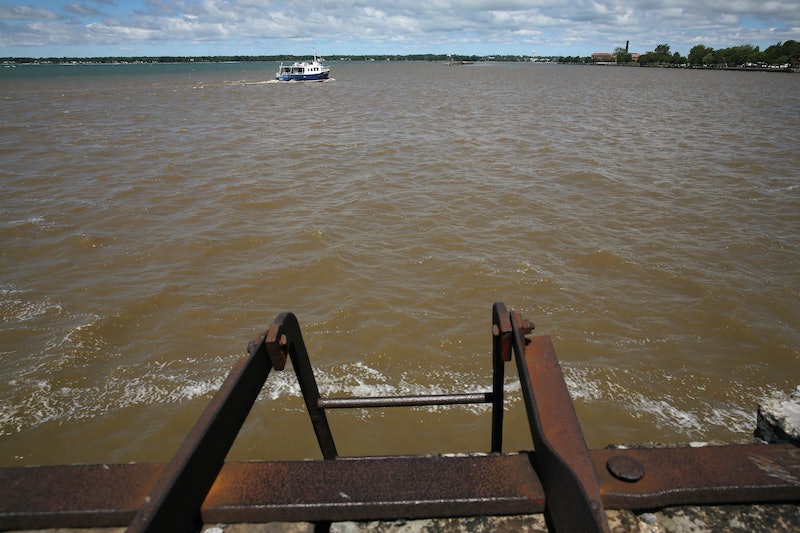 There's never a good time for disaster to strike. But the beginning of August is surely an extra-awful time for Toldeo, Ohio, to have contaminated water. The water supply for the city and numerous surrounding communities was reported early Saturday morning to be contaminated with microcystin, a liver-damaging toxin. And there's no way around the ban, as everyone's typical purification method of boiling the contaminated water only makes it more powerful.

The City of Toledo first issued a do-not-drink warning on its Facebook page at 2:00 a.m. on Saturday. Apparently aware that Toledo is currently a straight-up disaster movie, the author of the post opened with an all-caps warning right out of the opening of a zombie-apocalypse story:

DO NOT DRINK THE WATER DO NOT BOIL THE WATER

A few posts later, the city helpfully pointed out that "it is NOT recommended that you sell/scalp water to residents."

The microcystin contamination is thought to be the result of an algal bloom in Lake Erie, where Toledo's water comes from. The bloom, which is made up of harmful cyanobacteria, produces the toxin, which in turn causes everything from vomiting to liver damage to rashes to numbness. Seriously, don't drink it. Or give it to your pets. Or clean your vegetables with it. Or brush your teeth with it. Seriously, just step away from the faucet.

The city government has advised restaurants to close down until an all-clear is issued, unless the operators can ensure that absolutely none the water used on the premises comes from the city's water supply. (I'm looking at you, dishwashers.) The mayor has perplexingly said that showers and baths are fine for the area's 400,000 residents, but considering the risk of accidental ingestion and the whole rash thing, I wouldn't risk it. Unless you fill your tub with hand sanitizer instead of tap water, but that opens a whole new set of issues.

Ohio's governor, John Kasich, has issued a state of emergency for the area and deployed National Guard troops to distribute clean water to residents. In the meantime, people in the contaminated areas are buying all the bottled water they can, from stores in Toledo and surrounding cities. The crisis even has its own hashtag: #emptyglasscity. There's no word yet on when an all-clear might be issued. In the meantime, good luck with that hand sanitizer.