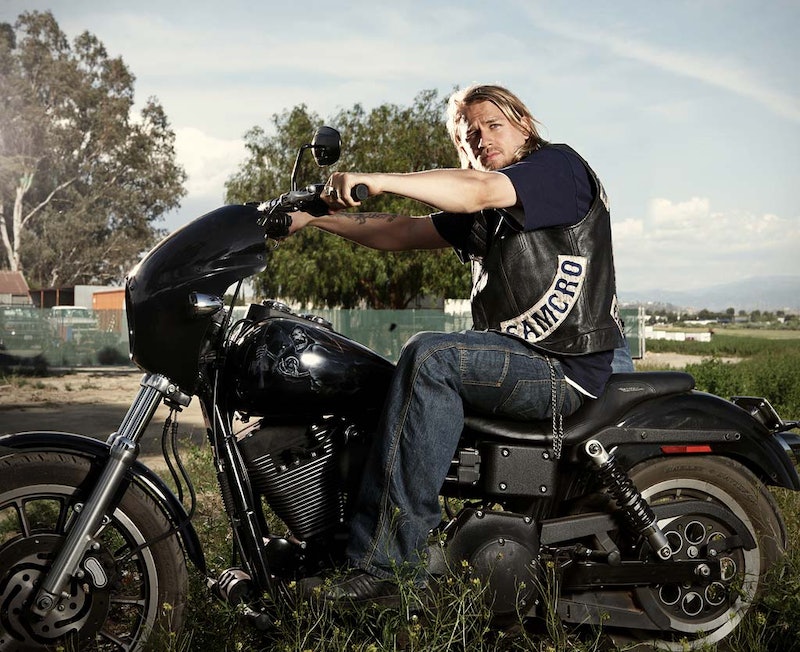 It's a simultaneously a sad day and an exciting day for Sons of Anarchy fans: Just earlier, the official SoA Twitter posted the final official poster for Sons of Anarchy 's last season, which is set to premiere on September 9. These? Yes, these are tears. I have enough security and confidence to admit that I am crying uncontrollably both from excitement and at the thought of saying goodbye to Jax Teller and SAMCRO. Yeah, there are a lot of emotions going on over here right now.

Of course, unsurprisingly, the tweet only makes things worse, so prepare yourselves, Sons of Anarchy fans: "The Final Poster. The Final Season. The #FinalRide begins 9/9/14," it reads. UGH. This coupled with the news that series star Charlie Hunnam has been "crushing" season 7 of the series (and this comes from executive producer Kurt Sutter, so obviously he knows what he's talking about) makes me both wish it was September 9 already and also wish September 9 would never come because then, at least, SoA wouldn't be over. It's a flawed logic, I know, but let me have this, it's all I have.

You can check the poster out below. WHY DO THINGS HAVE TO END?

More like this
'The Sandman’s Ending Is A Departure From Neil Gaiman’s Comic Book Series
By Kadin Burnett
'Bridgerton’s Jonathan Bailey & Simone Ashley Just Teased A First Look Of “Kanthony” In Season 3
By Grace Wehniainen, Alyssa Lapid and Sam Ramsden
7 Of The Highest Highs (& Lowest Lows) From Love Island 2022
By Victoria Sanusi
The 'PLL: Original Sin' Creators Say A’s Identity Will Be “Very Clear” By The Season Finale
By Alyssa Lapid
Get Even More From Bustle — Sign Up For The Newsletter