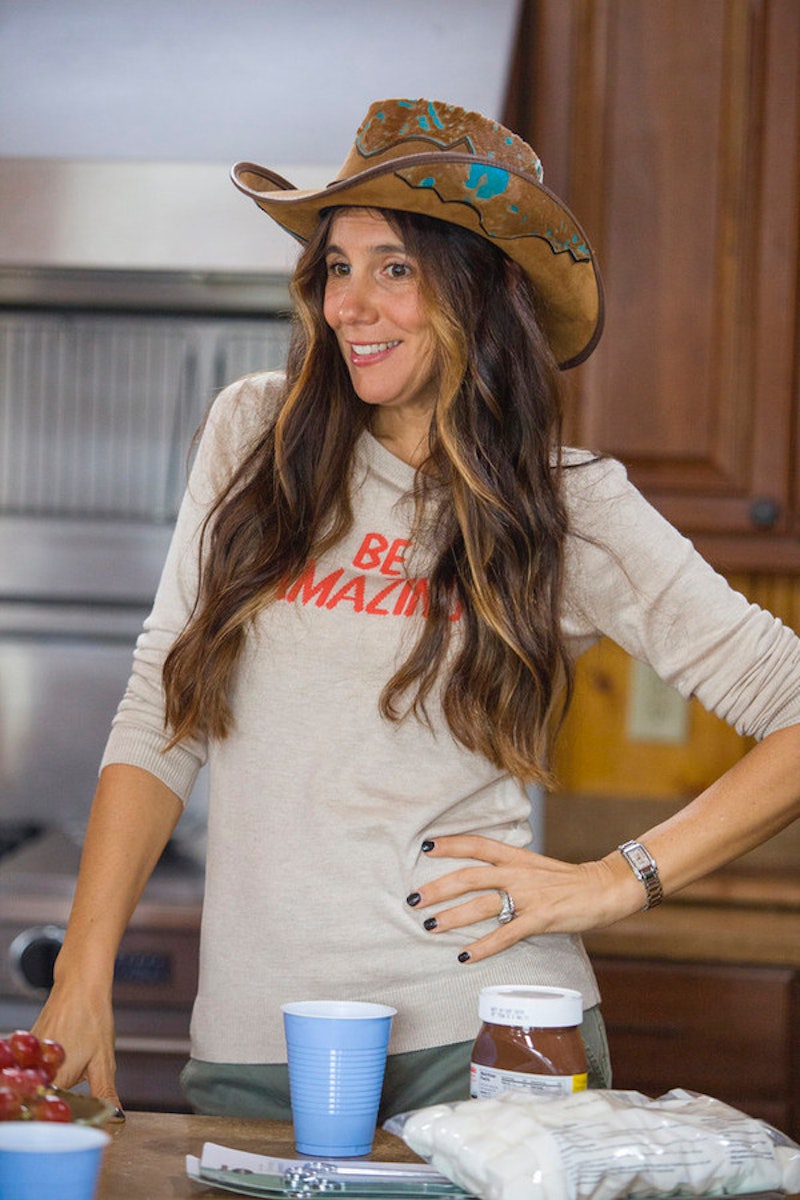 Whenever I see the previews for Bravo's new reality show Jersey Belle , I always think to myself, "Who is Jaime Primak Sullivan, and why does she have her own show?" But knowing that Bravo's whole M.O. is basically to pluck the most outspoken, eccentric, and drama-prone individuals from seeming obscurity and make them known to the world over by putting them on TV, I trusted that Sullivan would be a character worth watching. And in fact, it looks like she will be.

Sullivan is the star of Jersey Belle, a new docuseries premiering Aug. 4 on Bravo. Jersey Belle is your typical "fish out of water" story. Sullivan is a New Jersey native who has been living in Mountain Brook, Alabama, an upscale suburb of Birmingham, for the past few years with her husband and three young children. So basically the series will show Sullivan learning how to put on some Southern charm, while her friends try to understand what a knish is. Yes, it is another reality show to exploit New Jersey culture, and yes, it will be yet another one of these shows that is irresistible to watch.

Still, Sullivan is thriving in her new surroundings. She's a hard-working mom who has her own entertainment company and who is also a producer of Jersey Belle. This "fish" is not doing too shabby after all. Read on for seven more reasons why Sullivan is going to be your new favorite Bravo-lebrity.

She'll Always be a Jersey Girl

Sullivan grew up in Freehold Township, not far from where Bruce Springsteen grew up. Her uniform was a T-shirt with the cover of Bon Jovi's Slippery When Wet album on it. Whenever she goes home, she hits up local pizza joint Federici's for a whole pie, not just a slice, of mushroom and onion pizza. Her home state would be proud.

She Runs Her Own Company

In 2005, Sullivan founded the company Bridge & Tunnel Entertainment, a talent, brand, and hospitality public relations, events, and branding company. Some of her clients include Wayne Brady, Chris Klein, and Shanna Moakler. Though she's living in the South, Sullivan is constantly traveling to Los Angeles for business, and we'll get to see some of her famous clients on the show this season.

She Married a Southern Gentleman

Sullivan ended up in Alabama because of love, specifically her husband Michael Sullivan, who she met at a café in Birmingham. Though she at first declined his request for her phone number, when Sullivan stopped by the same café again a year later, she agreed to have dinner with him. After dating long distance for about two years, the two married. Don't you just love a nice Southern fairy tale?

She's a Working Woman From Way Back

Before Sullivan found herself in entertainment PR, she worked in some less glamorous, but no less important, jobs in telecommunications marketing for AT&T and teaching special education at a high school in Jersey City. I told you she knows the meaning of hard work.

She Needs to Catch up on Her Bravo

Recently, Sullivan tweeted that she just found out that acclaimed songwriter David Foster is a member of the Bravo "family" as husband to The Real Housewives of Beverly Hills Star Yolanda Foster. Girl, that is like Bravo 101. Let's hope her Bravo knowledge expands once her show is officially on the network.

She's Headed for the Silver Screen

Now that Sullivan has repped the entertainment world and will soon conquer the small screen, she's setting her sights on the movies. She has two projects in the works, one a comedy inspired by her trip to Alabama and the other a horror film. Hopefully, the latter doesn't also come from personal experience.

Though this Jersey Girl loved Bon Jovi growing up, Sullivan is very much a hip hop fan now. She often tweets about her love for hip hop music and her company even represents rap stars old and new, such as Doug E. Fresh, Lil Mama, and MC Lyte. What I wouldn't give to see Sullivan lip sync "Lip Gloss" in one of her "caroke" videos.