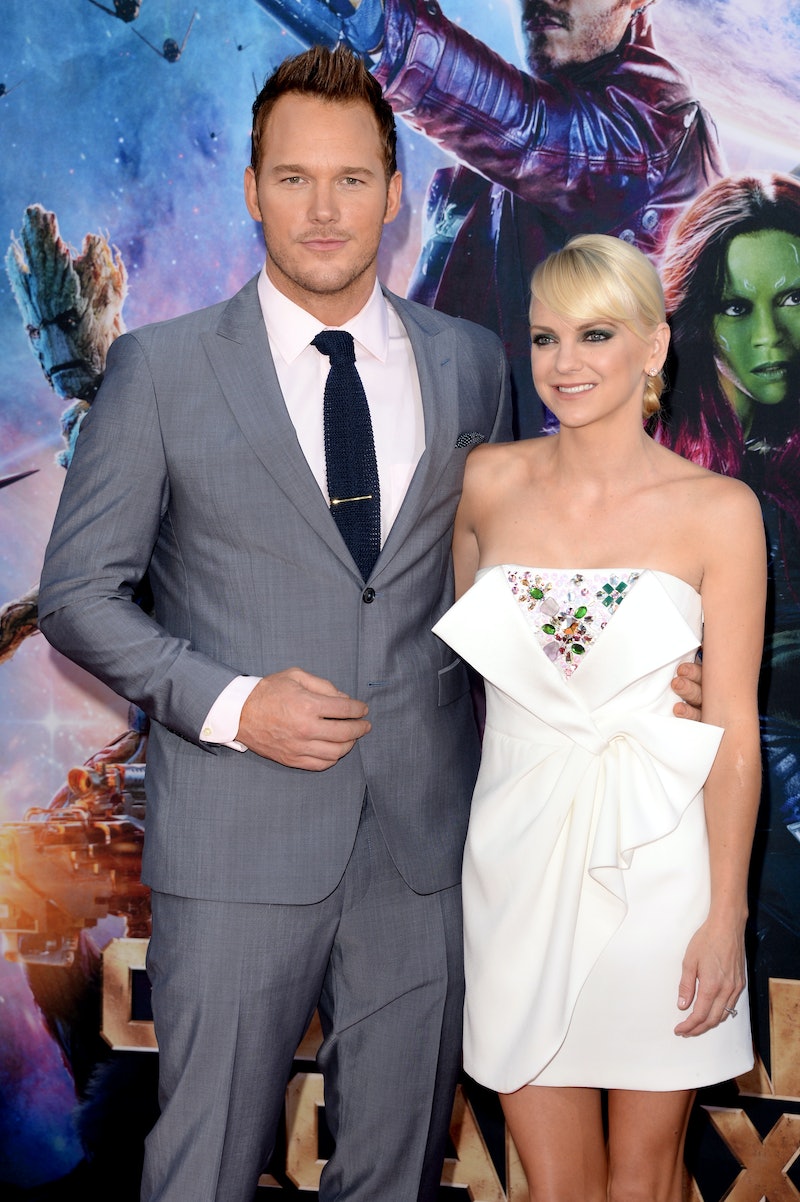 Is it possible to have a couple crush? Like, a crush on both members of the couple together? It’s not that weird, right? I just support that that couple made a good decision in finding one another, because finding someone is tough and finding someone you get along with and "like-like" is even tougher. It's why I've come to terms with Brad Pitt and Angelina Jolie, who realized that, along with being way too pretty for their own good, they are super compatible. My personal couple crush is Guardians of the Galaxy’s Chris Pratt and actress Anna Faris. They are frankly too pretty for their own good as well, and they won me over with their scenes together in the romantic comedy What’s Your Number? The Couple cracked me up as they danced around a kitchen eating corn dogs and sporting fat suits. From that moment, I just knew I needed them to be my best friends. And I refuse to feel weird about admitting that.

They just seem like the type to come over and go along with it as you try to make Scrabble into a drinking game, or at least enjoy some good food at the barbecue — two characteristics I require in my best friends, obviously. And while everyone’s been crushing on Pratt’s super cut body and 60-pound weight loss for his role of Star-Lord/Peter Quill in the record-breaking blockbuster Guardians of the Galaxy, I’ve been reeling in excitement at all the mentions of Faris in his interviews and his tweets. Most recently, in celebration for his movie reaching the third-highest box office debut of 2014 and being the biggest opening for an August release, he and Faris celebrated in what is the only way to honor months of working out to get action movie ready: eating Tater Tots.

It is the only way! But their love of food is just one among the many reasons they're the perfect couple.

Pratt and Faris made a guest appearance on Bravo's Top Chef, where the contestants planned a whole menu for them. Pratt joked that the chefs should, “Just pack as many calories as you can into each bite, and I think you’re going to win our hearts," and suggested they use "Pacific Northwest squirrel" in their dishes as Faris stressed how broad their tastes were.

As everyone fawned over Pratt's washboard abs, Digital Spy asked Pratt if he would keep the weight off or if Faris was enjoying it, and he replied with "She likes abs, but she likes her fat husband better, because she gets to feed him." He explained, "She’s a feeder and she wants to keep me locked up in the bedroom all fat and eating Kentucky Fried Chicken.” It's stinkin' special when you can find someone who will do that.

They Love Each Other As Is (Also they still love eating)

Pratt said that he liked Faris' smokey eyes but added “I don’t think she’s ever not looked sexy. Maybe with barbecue sauce on her face — I think that’s when she’s the sexiest.” And when Faris was asked about Pratt's buff bod, she said, "It is super sexy, but he is also hungry. I would love him any way he was." All well and good and supportive, but Faris added that she found him sexiest when he had some meat on him.

He French Braids Her Hair

If you've been living under a rock, then you probably missed Pratt braiding a lucky intern's hair while he answered questions about dinosaurs — because nothing says butch action hero like that combination. But Pratt's proud of his skillz and Instagrammed a picture of his hair handiwork as seen on his wife. Just imagine how many times he's practiced. It's just adorable.

When asked if Pratt had any issues with Faris making out with Captain America actor Chris Evans on the set of What's Your Number? Pratt said that there were negatives to being working actors like being apart all the time and he joked that taxes were rough but he said that, "I’m secure in my relationship. We’re professionals.”

They Love Watching Their Son's Firsts

They Found Each Other

Some couples turn into each other when they're together long enough, but Pratt admitted that “We both have a lot in common. I don’t think we turned into one another. I think we found each other.”

Obviously, they're great together, so much so that Faris' What's Your Number? costar Evans wouldn't mind getting in on the action.

There's no need to worry, Captain America. Pratt and Faris are in it for the long haul.