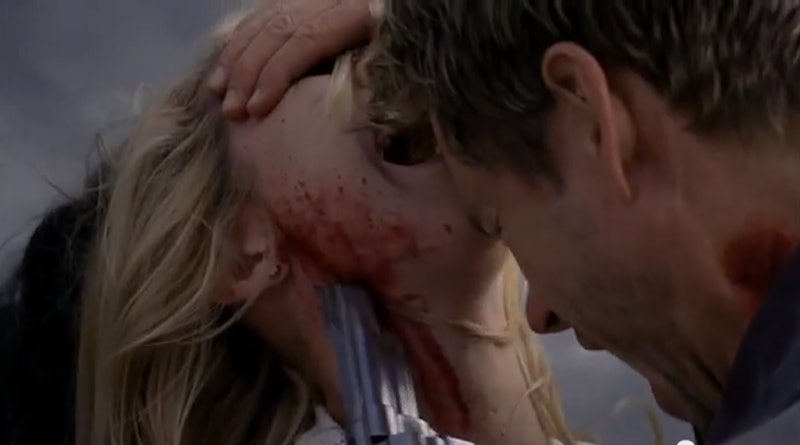 True Blood has gotten a lot of flack recently, be it for the twisted plot-lines, the confusing lack of monogamy and much more. But it's episodes like tonight's that remind us diehard fans why we started watching in the first place. Instead of turning up its nose at huge topics like marriage, religion, and prejudice, this episode, appropriately titled "Life Matters," touches upon themes of death, in all of its myriad forms.

We saw the sweet, funny pain of Terry's funeral, full of guns, stories, and, as usual, Lafayette's dope-ass outfit. However, we also saw the other side of death, be it vampires, struggling to remain on earth in the prison, or the lives of those who ran Sarah Newlin's death camp being tossed away by vengeful prisoners. There were also biblical allusions aplenty in the episode, indicating a more reflective attitude in its making. The image of Sarah Newlin, all in white and spattered with blood, praying to Jesus as she opens the roof to kill all of the vampires standing below is stark, an angel of death-type image that one is bound not to forget. Let's not skip over when she kills the True Blood rep, whose blood streams into the seething cage of hungry vampires below, but mostly into one ruthless prisoner's mouth.

The memory of good is fiercely juxtaposed with the reality of evil in a way that makes "Life Matters" actually matter to us. Sookie might be pouting and relying on people as usual, but even she is unusually brave, telling all of Bon Temps that she's a telepath just to buy Arlene time to gather herself before speaking about Terry. This moment showed the characters of True Blood at their very best, working as an ensemble to commemorate Terry's death or burn away the evil of the vampire death camp. It's rare that we get to see Sookie as she was in first season, bright and cheery in her job at Merlottes, and it was certainly nice to remember Terry's first day through Lafayette's kind stories. For the first time this season, I felt actual emotion for the characters of True Blood, and perhaps that's an indicator of what's to come.

I mean, despite the slow, poignant nature of this episode, they've set us up for an action-packed ride next week. Sookie is now bound to become Warlow's vampire bride (even though it's kind of hard to believe she'll go through with it), Eric has gone somewhere to do something, and Bill has defied the vampire god Lillith by remaining on earth. Whatever goodness was reaped from the meaningfulness of death this episode might not translate to next week, but we hope it does.

Because I remembered what was to love about Sam (even though he's now impregnated a 23-year-old only weeks after Luna's death), and was genuinely glad to have gotten Alcide back from the dark wolf-y side of himself. And then there's Sookie: The way in which she goes from past love interest to past love interest — looking for someone to tell her not to become Warlow's progeny/wife, but remains alone in her decision — is among the only times she has made a decision by herself. And it's well-timed.

So, not that I want next week's episodes to make me tear or ache in the same ways, but I hope they harness the raw power of this week's episode. Terry's death served this show well once again by reminding us of the human element of True Blood, even when the series is overrun with vampires, faeries, werewolves, and shifters. We can only hope next week's finale will continue in the same fashion.