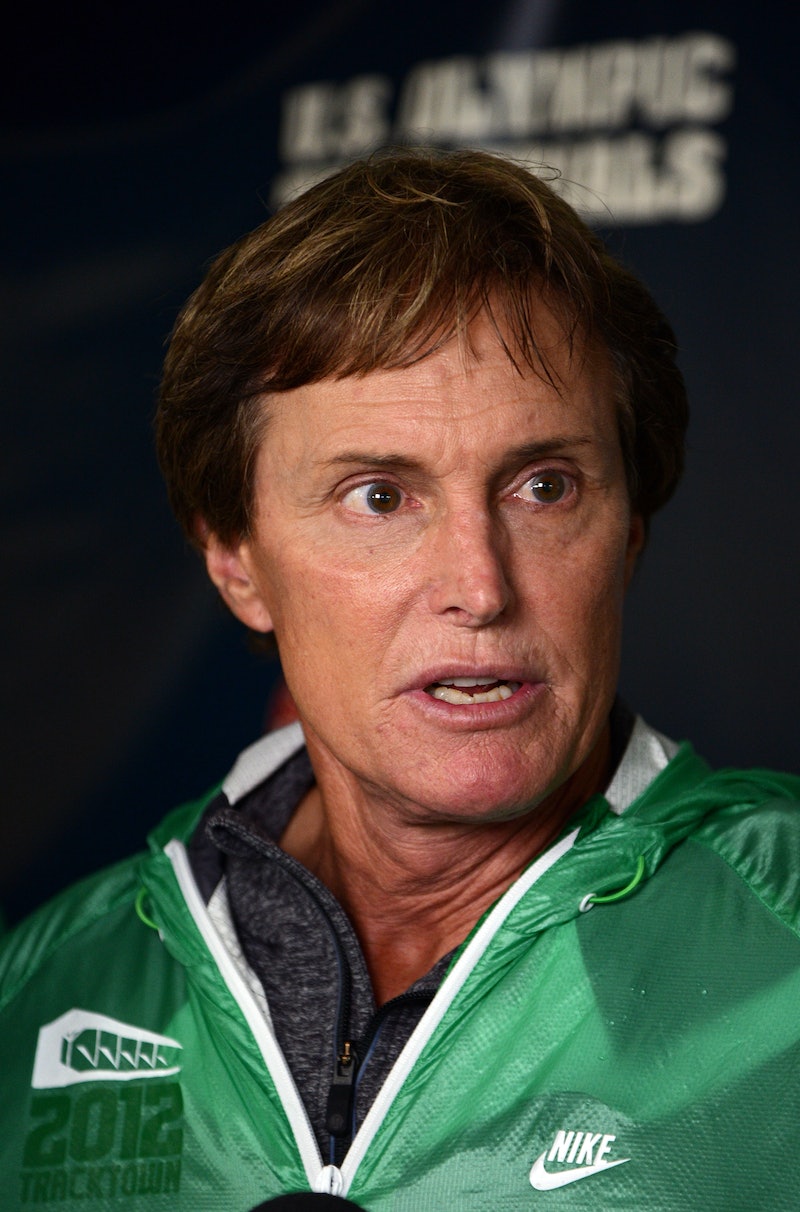 Enough with all these Kourtney and Khloe Take (Insert City) shows. The only Keeping Up With the Kardashians entity that needs its own spin-off is Bruce Jenner's hair. You know you'd DVR the hell out of that show. The former Olympian, who has an evident penchant for switching up his 'do, debuted a new hairstyle recently — one I'm deeming the dry mullet — and, as you may imagine, it's amazing.

To be honest, it's a little hard to tell if this is a hard-core new hairstyle Bruce is planning on sporting in the upcoming months, or if the cameras just happened to catch Bruce and his hair at a gusty, inopportune moment. But whatever is happening atop Jenner's head in this shot is pure awesomeness if you ask me — partly because it's unchartered hair territory; partly because you know Kris Jenner would totally bitch Bruce out over this, were they still together. But since they're not, she can't.

Ladies and gents, feast your eyes on Bruce Jenner's latest and greatest locks look. Sure, the man looks like he could use a hot oil treatment or two, but look at the smile on the guy's face. How can anything look bad with that?

Of course, this isn't the first 'do of Bruce's that's made headlines as of late. In the last few months, the man has gotten more coverage regarding his hair than the tresses of some of his more famous family members. Let's take a quick jaunt down memory lane and check out some of the more noteworthy hairstyles of Bruce Jenner's past.

Not that long ago, Bruce sported "normal dad hair" in the form of a short cut. Nothing really note-worthy.

Bruce then started experimenting. He grew his hair out a bit, kept a center part, and tucked his locks behind his ears. Kind of like a shorter version of his son Brandon's hair when it's not in a bun.

3. Ombre With a Side Part

Jenner had a brief stint with letting his hair fall to the right side. He also experimented with highlights and and an ombre style for a short while. However, he appeared to quickly get rid of it, as it wasn't well-received, and some accused him of trying to look more like Kim.

Bruce tends to sport a low pony on the reg these days, and being that Kris Jenner hated it so much, can't say it's all that surprising. Personally, I like it. And might I suggest, it's the perfect style for the days he wants to keep a leave-in conditioning treatment in his hair. None will be the wiser.

Wonder what style Jenner will go for next? My money's on a fishtail braid. But I'm probably wrong, as if anyone is capable of surprising us, it's Bruce's hair.