If you thought the feud between Nicki Minaj and Lil' Kim was over — or that it should be — then prepare to be disappointed. Minaj and Lil' Kim had been more or less at each other's throats since 2010 when Lil' Kim reportedly made disparaging comments about Minaj stealing her style, even though Minaj actually considered her an inspiration. Those days are a few veiled insults in the verses of singles and several years in the past, but shots have been fired anew. The remix version of "Flawless" released by Beyoncé and Nicki Minaj on Sunday got attention because, hi, Nicki Minaj and Beyoncé but also because Beyoncé actually referenced the infamous Jay Z and Solange elevator fight within the lyrics. However, apparently we should have paid more attention to Minaj's version because Lil' Kim managed to find an insult somewhere in it. On Monday night, she dropped a Lil' Kim remix of "Flawless" that did nothing to hide the fact that it's a shameless diss track.

"Am I tripping or did this ho just say my name?" Lil' Kim raps on the remix. "Queen of rap, f*ck outta here. Queen’s back, f*k outta here. Time to get this wack bitch up out of here. Woke up like this? F*ck outta here."

On the bright side, you get to listen to the entire Beyoncé and Nicki Minaj remix before Lil' Kim adds her piece, so there's no need to listen to the two songs side by side in order to see what portions Lil' Kim changed. On the dark side, I thought that we were past this. The current speculation is that Lil' Kim took particular offense to Minaj rapping the line, "These bitches washed up and ain’t no f*cking soap involved."

However, since there haven't been any major events in the Lil' Kim/Nicki Minaj beef since 2013 when Minaj released the blatant diss track "Stupid Hoe," it really feels like Lil' Kim is outright listening to Minaj's music for perceived slights and overreacting accordingly. When the beef was at its height, Lil' Kim received very little support from those who weren't already fans of hers, since most people saw her attacking a largely unresponsive Minaj for no apparent reason. History seems to be repeating itself on that front, as far as Twitter is concerned.

Honestly, the Lil' Kim and Nicki Minaj beef has been over and done with for close to a year now, so why Lil' Kim chose now to reignite it is anyone's guess. Is she really jealous that Beyoncé chose Minaj to do the "Flawless" remix instead of her? Was Minaj really sending a belated diss Lil' Kim's way and Lil' Kim was the only one who picked up on it? Was one line in one verse really worth an entire diss track?

Hopefully, Minaj won't respond to the track and will just let it lie, taking the higher road here. She's been speaking out about how sad it is when women feel the need to drag each other down and compete against one another lately and I would hate to see her turn her back on that message just to sink to Lil' Kim's level. Check out the song below. 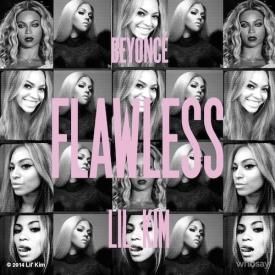