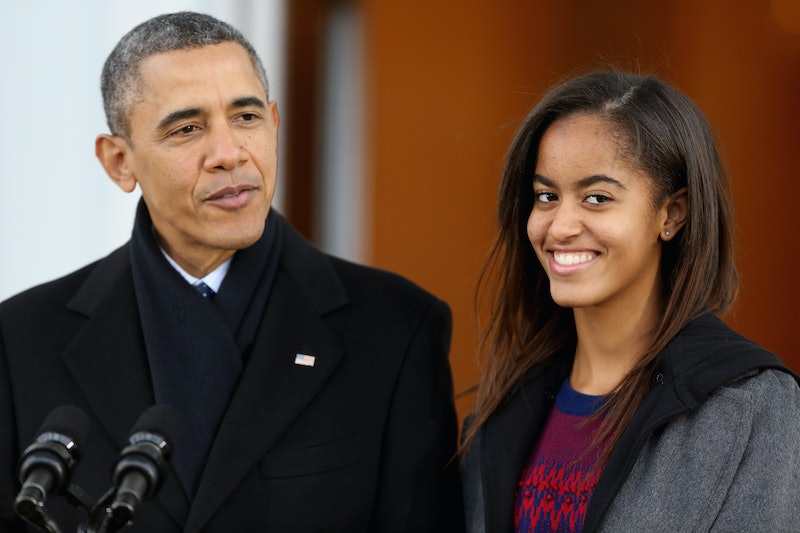 Being a teenager is complicated enough without having the president as your father, but Malia Obama attended Lollapalooza in style and totally kept her cool. According to reports from several attendees, the 16-year-old first daughter was spotted hanging out at the music festival on Sunday. She even managed to slip a selfie in beneath the Secret Service's radar, posted online by lucky Twitter user @cleaaaaver.

In the photo we can see that Malia is sporting a very '90s sunflower dress, adorable French braid, and cheeky, open-mouthed facial expression. When did she get so grown up? Wasn't she practically a baby like five minutes ago? And now here she is, rocking it out at Lolla with her cool friends, looking a heck of a lot more put-together than most other 16-year-olds.

The appearance of the first daughter caused quite a stir on Twitter, with tons of concert-goers tweeting their Malia sightings. One girl, 17-year-old Meghan Lomas, told the Chicago Tribune that the Secret Service helped her figure out that Malia was nearby.

Lomas said she and her two friends knew something was up when they spotted the security detail and their ear pieces. “All these Secret Service guys were around,” she said. “My friend turned to me and said, ‘I’ve seen the movie, and I know what they are.’ ”

“I was in awe of her, and I was just staring at her for a while,” Lomas said. “I freaked out and I waved at her and said, ‘Hi,’ and she waved and said, ‘Hi.’ That was really cool. She seemed really nice and polite and stuff.”

Another Lolla guest told the Tribune that Malia came to see rapper Chance perform. All I care about is that outfit, which is unbelievably cute. The knowledge that Kelly Kapowski-worthy sunflower dresses, popular when I was a little kid, are back in style makes me feel ancient, but I also now want to go out and relive my childhood with one.