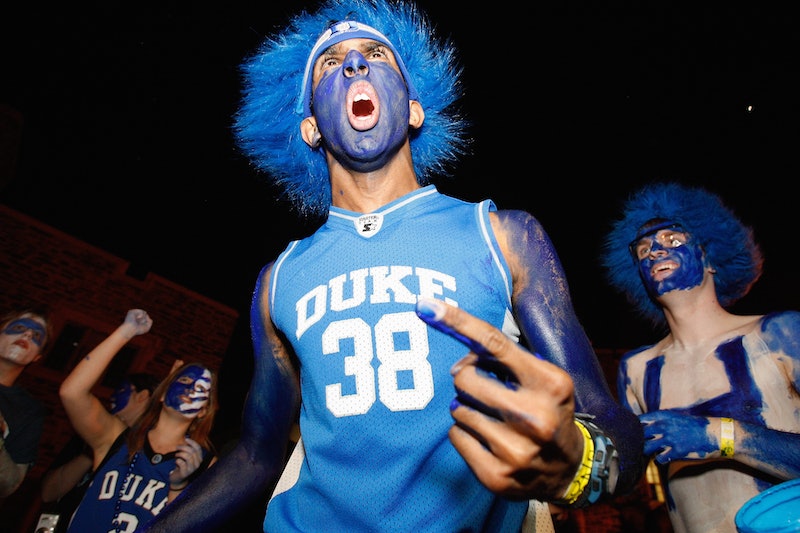 You may think dressing like a Duke student boils down to a large tub of blue body paint and a closet full of sports jerseys, but there's more to the sartorial code of the university than just the athletics. Much like the public school depicted in Mean Girls, Duke is composed of interest-based cliques. Engineers dress differently from sorority girls who dress differently from jocks, and so on. While there are cross-overs between these seemingly exclusive categories, each sector brings its own unique flavor to Duke's unspoken dress code. Case in point, sorority girls wield their letters via sweatshirts, caps, and accessories like they're going out of style. And those pre-law or finance students? They're likely to be suited up for interviews with recruiters on any given day. In honor of Duke alums and that naive freshman class who is gearing up for the coming year, here are the items that clothe the average Duke student.

So while that body paint and blue wig may be wardrobe essentials, these nine items are just as characteristic of your average Duke University student. After all, what is a North Carolinian without their pastel pink, whale-printed Vineyard Vines tote?

Allow me to introduce myself: I'm the only Duke student who graduated without owning a piece of Blue Devil memorabilia, aside from an oversized football jersey I enjoy wearing about my apartment on lazy sundays. If you're in that lonely minority of students who don't live and die for basketball, the fact can be hidden by sporting all manner of Duke Blue gear.

2. A SORORITY OR FRATERNITY BASEBALL CAP

In a somewhat befuddling trend, Duke sorority girls of particularly well-regarded chapters adore wearing baseball caps emblazoned with theirs (or their boyfriend's) greek letters everywhere. If you think being a sorority girl at Duke means sporting flawless Bora Bora black pearls and starched white blouses, you're sorely mistaken. The baseball cap is a trademark of girls who are proud of their Hellenistic tendencies, and are worn absolutely everywhere, from the gym to class. Wearing a hat inside is unpatriotic, you say? Not at Duke it isn't.

After a raucous Saturday night on campus, it's not uncommon to find the ground strewn with odds and ends from the party circuit: a Smirnoff bottle here, a patent leather heel there. But my favorite discovery one morning was a pink and periwinkle tie by Vineyard Vines imprinted with a dashing whale motif. This single accessory perfectly encapsulates Duke's proclivity for prep: Own something, anything, by the beyond-preppy Martha's Vineyard-based brand Vineyard Vines, or prepare to find yourself fighting an uphill battle against the brand during your tenure at Duke.

Yet another shocking discovery I made regarding the Duke dress code? Women wear exercise clothes. Everywhere. But these aren't just any exercise clothes. Exercise clothing worn outside the gym is chosen carefully for its ability to flatter curves — or lack thereof — and generally make the wearer appear ultra-fit. Some students wear their gym clothes for the comfort, but more commonly, the ensembles are a statement about the health and fitness of the wearer: I may not be at the gym right now, but I have a Zumba class between Organic Chemistry and Psych 101, and a Pilates class before dinner.

Have you heard of Mike Posner? If you matriculated at Duke between 2008 and 2012, you likely know of the singer's quick rise to fame based on hits including Drug Dealer Girl and Cooler Than Me. The latter is a somewhat scathing portrayal of Duke women, who Posner states wear "designer shades just to hide your face", a commentary which isn't entirely inaccurate. Duke students love their sunglasses, to the point where walking outside on a spring day inevitably results in colliding with a sea of Ray Bans.

If you don't own a North Face fleece while attending Duke, you may as well accept your status as a deliberate contrarian. The fleece is as ubiquitous at Duke as discussions of whose GPA is highest and which courses to take for an easy A.

Duke throws a party like no other school. And to its credit, many of its shindigs are open to any student. This being said, cocktail attire is a recommended if not required part of the University look; the shorter and more chic, the better.

If you're planning on rushing a sorority, attending tea at the Washington Duke, or really just setting foot outside after the month of April, a little white dress is essential. The LWD is so ubiquitous at Duke that one might say an onslaught of the item in mid-April hearkens the return of warm weather.

It is college, after all, and the accessory du jour is a beer can. Perhaps it's a harsh reality of Duke University life that you're never fully dressed without a can in hand.