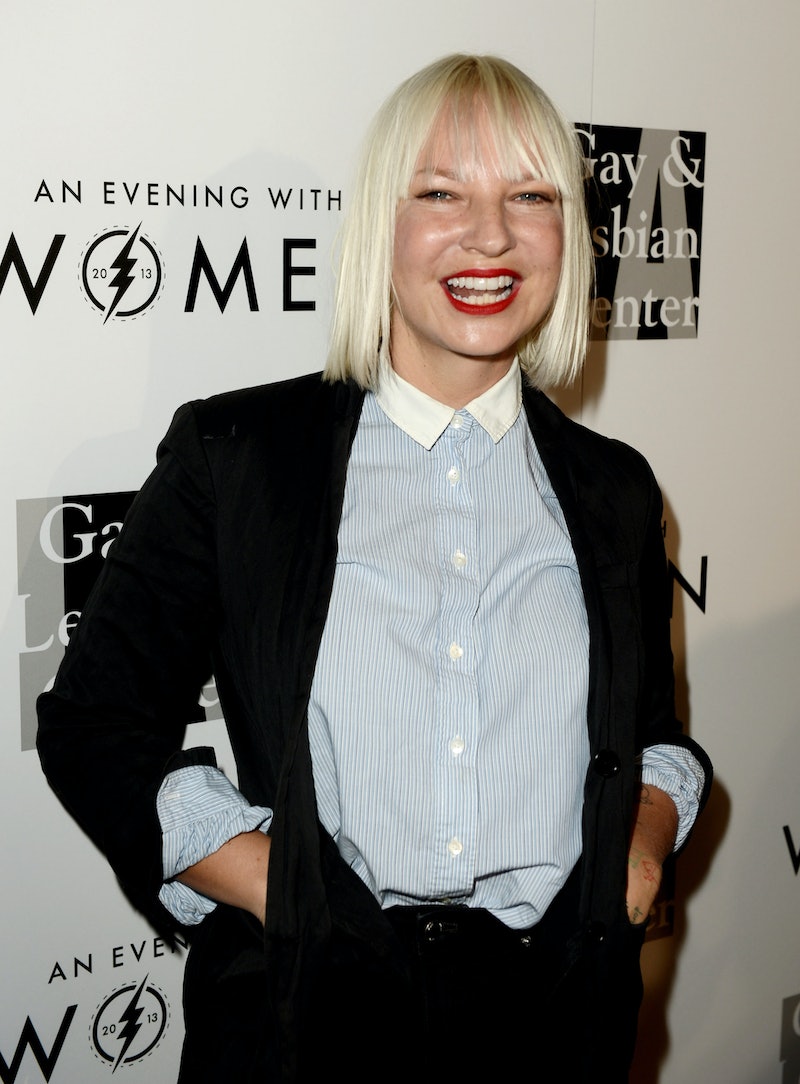 Sia Furler's been making great music for a long time now, but she's only just beginning to see some serious mainstream success. Her current single "Chandelier" just hit No. 9 on the Billboard Hot 100 chart (her first top 10 single as a solo artist), and a few weeks ago, her sixth studio album, 1000 Forms of Fear , debuted at No. 1 on the Billboard 200 albums chart. Though Sia told The New York Times in an April 2014 interview that "becoming famous" was "horrible" and that she wants to lead "a private life" (even going so far as to hide her face during recent live performances), Sia's more famous today than she's ever been. Huh. It's funny how life works out sometimes, isn't it?

In addition to crafting her own unique music, during the past few years, Sia's worked hard to establish herself as one of pop music's most sought after songwriters. In fact, she's co-written songs for some of the biggest names in the music industry today: Rihanna, Beyonce, Katy Perry, Britney Spears, Christina Aguilera, etc. Wait a minute — she's written songs for Britney AND Xtina?? It's true. The two former Mouseketeers, who were often pitted against each other (especially at the beginning of their careers), have both worked with Sia in recent years — and the results have been pretty fantastic!

So, in honor of Sia's newfound status as one of 2014's breakout stars (whether she likes it or not...), and in honor of two of our favorite '90s pop idols, let's take a look at the songs that Sia cooked up for the lovely and talented Britney Spears and Christina Aguilera.

The second single taken from Spears' last studio album, Britney Jean, "Perfume" is an interesting look at feelings of jealousy and insecurity in a relationship. Billboard reports that Sia co-wrote the melancholy track.

"Passenger" boasts some pretty impressive songwriting credits. According to Popjustice, Sia, Katy Perry, and DJ/producer Diplo all collaborated on the track. It's definitely one of Britney Jean's highlights, that's for sure.

OK, so pretty much everybody knows that Sia co-wrote "Perfume" for Spears, but did you know that, according to the iTunes credits, she also contributed to Britney Jean bonus track "Brightest Morning Star"? It's actually one of the stronger songs on the album, even if the lyrics are a bit...saccharine at times.

"You Lost Me," which according to Billboard, Sia co-wrote, is one of the few songs that's actually worth listening to on Aguilera's failed 2010 album, Bionic (if you've never listened to Bionic before, I'd stick to the tracks that Sia worked on). The Hex Hector/Mac Quayle remix is pretty good, too.

"All I Need," which according to Digital Spy was co-written by Sia (along with the following three tracks) and also appears on Bionic, is a simple yet sparkling love song that features one of Aguilera's most reserved and beautiful vocal performances to date.

"I Am," another Bionic track, definitely recalls some of the work on Sia's 2004 album, Colour the Small One (specifically, the iconic "Breathe Me"). At this point, you're probably starting to see that Sia and Aguilera are a pretty good musical match!

"Stronger Than Ever" is a bonus track on Bionic, and it makes sense — it's definitely not as memorable as the other Sia co-writes on the album. With its rock influence, it reminds me a little bit of "Fighter" from Aguilera's 2002 album, Stripped.

First, listen to Aguilera's version of "Blank Page" above. Then, listen to Sia's original demo recording. Hear the difference? Yeah, Aguilera's unfortunate habit of over-singing hurts this one a bit, but it's still a beautiful song. "Blank Page" is the only track that Sia co-wrote on Aguilera's last studio album, Lotus.

And there you have it. Aren't you just amazed by Sia's writing skills and her uncanny ability to shift and change in order to fit different genres and styles? I believe that she's one of the best songwriters in the music industry today, and right now, she's truly at the top of her game. Whether she decides to embrace or fight her mounting fame, well, that remains to be seen.

Hopefully, she'll continue to work with both Britney and Xtina in the future.