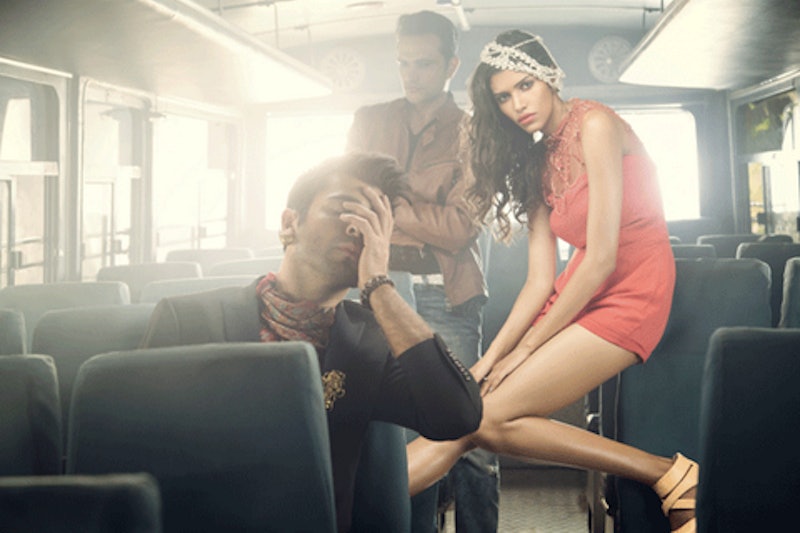 It is a widely accepted fact that fashion editorial pushes the boundaries of what is acceptable and appropriate, but photographer Raj Shetye's latest work depicting a viscous attack on a lone female bus passenger stepped too far over the line based on viewer reactions, reports Jezebel. Entitled "The Wrong Turn", the series portrays a young Indian woman in various pieces of luxurious clothing fending off male attackers. One image captures the model pushing away male hands clasped around her arms; another shows the evening wear-clad woman being trampled by a man in combat boots; yet another photo features the woman surrounded by men, one of whom is half undressed and positioned suggestively towards her, his face wearing an angry, predatory look.

The images would be unsettling on their own, but their uncanny resemblance to a 2012 gang rape and murder in New Delhi called Nirbhaya sent the public into a furor over the shoot's meaning and seemingly callous treatment of the tragedy.

Shetye claims that the photo series has nothing to do with the devastating crime, stating in an interview with BuzzFeed,

This is in no way meant to glamorize the act, which was very bad. It’s just a way of throwing light on it.

The photographer further stated that although the work was in no way a direct representation of the murder, creating the images was a means of drawing attention to the troubling state of society which gave rise to such an incident:

Being a photographer, the only medium I can communicate in is photos. For me, its as simple as that. It’s art. Making movies, writing articles, making a poem — these are all ways of addressing the topic. Being a fashion photographer, this is what I can do best.

Shetye further explained to BuzzFeed that the overwhelming volume of responses he has received since posting the images assures him that his work is igniting an appropriately infuriated response in viewers, stating,

While the photographer's responses make it unclear as to whether or not he intended such vehement reactions to his work and parallels drawn to Nirbhaya, what is unambiguous is the inappropriate undertone of the shoot which links fashion, elegance, and allure with violence.