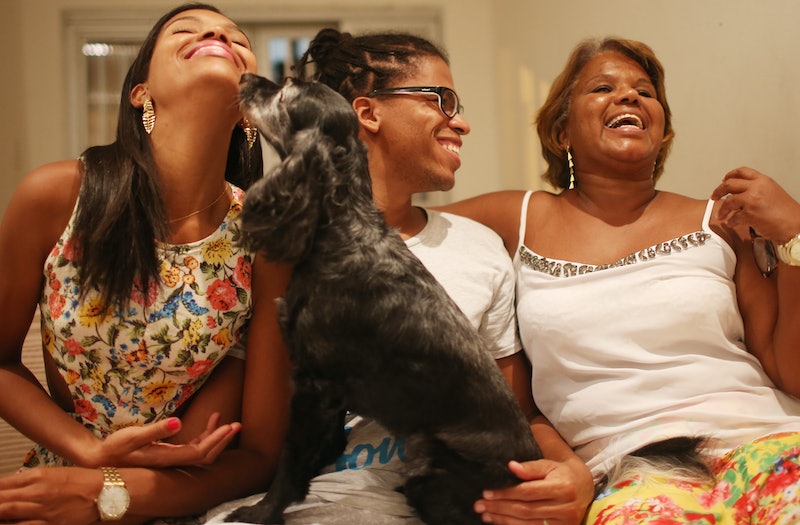 Nature is math and vice versa, so perhaps it’s unsurprising that an equation for happiness exists. A team of researchers at University College London just figured it out—and as you might guess, their study, which was just published in the Proceedings of the National Academy of Sciences, has some incredibly far-reaching implications. Neat-o, right?

The process researchers used for coming up with the equation was twofold. First, they asked 26 participants — quite a small sample size — to play a game that required them to make decisions that could lead to either monetary gains or losses. They played this game inside an fMRI, or functional magnetic resonance imaging, machine, which allowed researchers to keep track of their brain activity; the participants also reported their level of happiness after every few decisions.

Using this method, researchers found that happiness correlated with activity in two different areas of the brain, both of which are connected with feelings of well-being. With the data gained, they were able to create their equation. For the curious, here’s what the happiness equation looks like:

I have no idea what any of that means, but according to MedicalXpress, the terms can be defined as follows:

“T is the trial number, w0 is a constant term, other weights w capture the influence of different event types, 0 ≤ γ ≤ 1 is a forgetting factor that makes events in more recent trials more influential than those in earlier trials, CRj is the CR if chosen instead of a gamble on trial j, EVj is the EV of a gamble (average reward for the gamble) if chosen on trial j, and RPEj is the RPE on trial j contingent on choice of the gamble. The RPE is equal to the reward received minus the expectation in that trial EVj. If the CR was chosen, then EVj = 0 and RPEj = 0; if the gamble was chosen, then CRj = 0. The variables in the equation are quantities that the neuromodulator dopamine has been associated with in previous neuroscience studies.”

...Which is still all Greek to me. It probably makes sense to the more mathematically or scientifically inclined folks out there, though, so do with it what you will.

Anyway, after the researchers came up with their equation, they needed to test it on a much larger scale — and that, my friends, is what the Internet is for. They created a smartphone game called The Great Brain Experiment and had 18,420 people play it for points (as opposed to money). The data they gathered through the game showed that the equation was, indeed, accurate when it came to predicting the happiness of those playing it.

It’s worth noting that the equation only predicts momentary happiness, not long-term happiness — but even so, the results are quite noteworthy. The equation, for example, might help us understand mood disorders better, which will in turn lead to better treatment. Indeed, according to LiveScience, lead study author Robb Rutledge and his team are currently testing people who have been diagnosed with depression to see if the equation still works.

The Great Brain Experiment is still live, by the way, so if you want to donate your brain to further research, go ahead and download it. Go science!