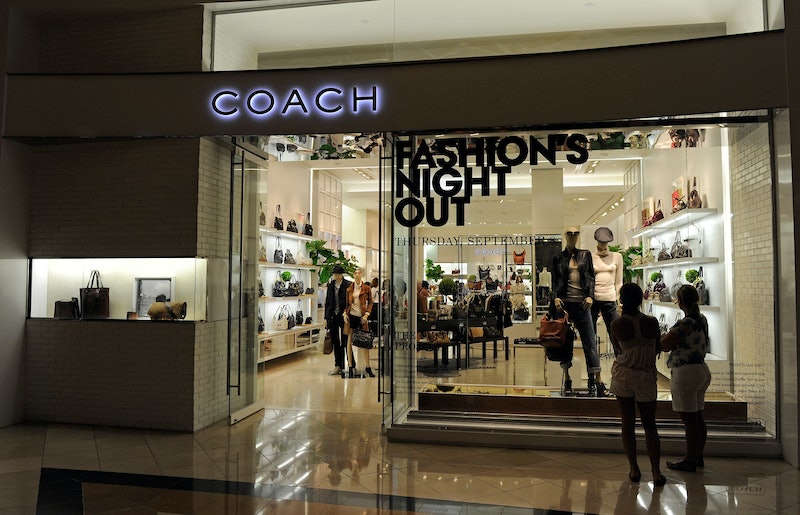 It's officially safe to say that 2014 has not been a good one for Coach. First, there's the drop in business — according to Bloomberg, sales have fallen for a fourth quarter in a row for the well-known women's bag and accessories line. And Tuesday, this bit of news was released: A former Coach intern is suing the company for being misclassified as an intern and thus, not receiving any payment for her work.

Johnetta Campbell filed a lawsuit in the Supreme Court of the state of New York last month and is seeking minimum wage compensation, in addition to damages for herself and her fellow employees. Campbell, who is currently a freelance assistant buyer at Saks Fifth Avenue, signed on as the administrative assistant intern at Coach's Manhattan office during a four-month period in 2012. During that time, Campbell claimed to have worked five days a week for five to eight hours per day.

According to her resume, which is posted publicly on Indeed.com, Campbell "manage[d] a wide variety of administrative support duties, including creating and handling the VP’s calendar and planning and managing the logistics for meetings and conferences" in addition to "[assisting in] schedules, appointments and travel for the VP" as well as "manage[d] special projects that require research including use of social media." According to The Fashion Law, Campbell alleges that Coach didn't pay its interns for doing work to minimize labor costs and to retain a higher profit value. Campbell claims it has been guilty of this practice since July 2008.

One of the main differences from this case vs. other unpaid intern lawsuits is that Campbell chose to file her case in violation of New York state law instead of the Fair Labor Standards act. According to The Daily Mail UK, New York has a strict 11-factor test ensuring that an internship is lawful. The requirements to determine whether an individual should be characterized as an intern or an employee in New York state include interns being notified in writing that they will not receive any wages, interns not receiving employee benefits and all postings for the internship clearly stating the educational benefits rather than employment.

Although I am 100 percent in favor of interns receiving proper compensation, I will say that in my three years of interning as a college student, I never received a penny of pay. And I was completely OK with that. I would have never been able to bag my first editorial job after graduation had it not been for the internships I had as an undergrad. Perhaps I was one of the lucky ones who had incredibly helpful bosses who taught me about how the industry worked and even hired me after college. Sure, I worked hard, long hours and even drove over 100 miles to get to one of the offices, but to me, it was an investment in my future career. And while it, of course, would've been amazing to have received some sort of stipend or pay, I think the experiences and relationships I made were far more important (as cheesy as that may sound). Still, I hope that Campbell receives the compensation she believes she rightfully deserves, especially if Coach violated any of the requirements under New York state law.