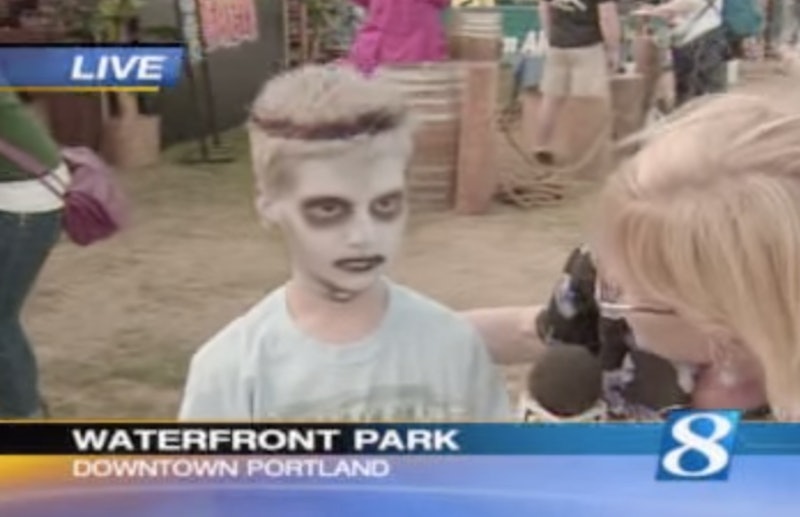 The Internet is a strange place, and it's given us a few strange celebrities over the years. But none stranger and more oddly cute than the boy known to YouTube as the "Zombie Kid" who "Likes Turtles." In 2007, then-10-year-old Jonathon Ware uttered three words that would be heard by over 45 million people: "I like turtles."

Considered one of TIME Magazine's 50 best YouTube videos, it is difficult to pinpoint what exactly it is about Jonathon and his confession that has kept audiences coming back year after year after year. Is it the way he says it? Is it the fact that he says it at all? Is it the rather frightening zombie face paint coupled with his love of turtles that makes the video so absurdly funny? Sometimes, the most important questions in life just don't have suitable answers.

Let's take a look back at Jonathon's meteoric rise to YouTube fame, and what the now-17-year-old is doing these days.

What is "Zombie Kid Likes Turtles?"

If you haven't contributed to the 45.3 million views Jonathon's video has on YouTube, here's the video, in all its glory. I'll set the stage for you first: it's a summer day, May 31, 2007, to be exact, and the Ware family is visiting the Rose Festival in Portland, Oregon. Suddenly, a local media correspondent from KGW catches sight of the freshly painted zombie face of Jonathon Ware. The rest, as they say, is history.

Why on earth did he say that?

A question his family, much of America, and I have asked too. A month after Jonathon's original interview, a KGW team decided to go back to its source and do some real investigative journalism. They tracked down Jonathon at his home in Milwaukie, Oregon, and asked the rising fifth-grader to answer a few of the more pressing issues his first appearance raised.

So why did Jonathon choose to share his love of turtles with the public? "I was nervous," he told KGW, "And I didn't even know what to say." But his outburst wasn't totally unprompted — there was, in fact, a "turtle display" near the face-painting station that gave Jonathon his impressive makeover, and he was so enamored by the reptile that he just "wanted to blurt it all out."

Is it just turtles or animals in general Jonathon likes?

Well, he also likes geckos, as evidenced by KGW's follow-up interview. But it seems that Jonathon is just an all-around animal lovin' kind of guy. As of 2007, the Ware family had three dogs, four cats, two birds, two hermit crabs, a lizard, and a gecko. Following his famous proclamation of turtle devotion, however, his mother told KGW that the family would also be adding a turtle to the mix.

How did Jonathon find out about his fame?

Through his sister, it turns out. Then 16-year-old Kim Ware was contacted by a friend via Myspace, who, as Kim told the Washington Post, "Basically wrote to say, 'Do you know your brother is famous on the Internet?'" A simple YouTube search later, and Kim had discovered that her brother was not only the talk of the town, but seemingly the talk of the nation. Soon thereafter, Jonathon had spawned a line of merchandise, from T-shirts to mugs to bags, and every other trinket that could possibly bear the zombie-painted face of a turtle-loving 10-year-old.

What other turtle paraphernalia can I stock my wardrobe with?

Well, you might not be able to find more clothing, but Jonathon's parents were contacted from everyone from a British ringtone seller, to an animal show planning a turtle special. And when it rains, it pours, as mother Tina Ware told The Scotsman. "Every day when I come home," Tina said, "There's a message from someone else on our answering machine." After all, it isn't every day that you find a zombie who loves turtles.

Ellen Degeneres. Because everyone likes Ellen. When the Washington Post asked Jonathon about what he wanted to do with his newfound fame, his request was simple — he wanted to be on Ellen. Keeping to his trademark brevity, Jonathon told the Post, "I just e-mailed her. She's rad. She's cool."

So what's he up to these days?

Jonathon hasn't wandered far from his YouTube roots, as he now manages his own channel entitled "ItsTurtleTime." Here, Jonathon offers his commentary video games, allowing his viewers to experience the game as he plays them. This move actually makes a lot of sense for Jonathon, given how confused many people were when he first became a YouTube star.

Keeping with the turtle theme, Jonathon proclaims on his channel description that he "may or may not be the sexiest turtle you ever meet," and has won over the hearts of nearly 1200 subscribers. Though his own videos haven't quite breached the popularity level of his original feature, we certainly look forward to hearing more from Jonathon Ware in the years to come.