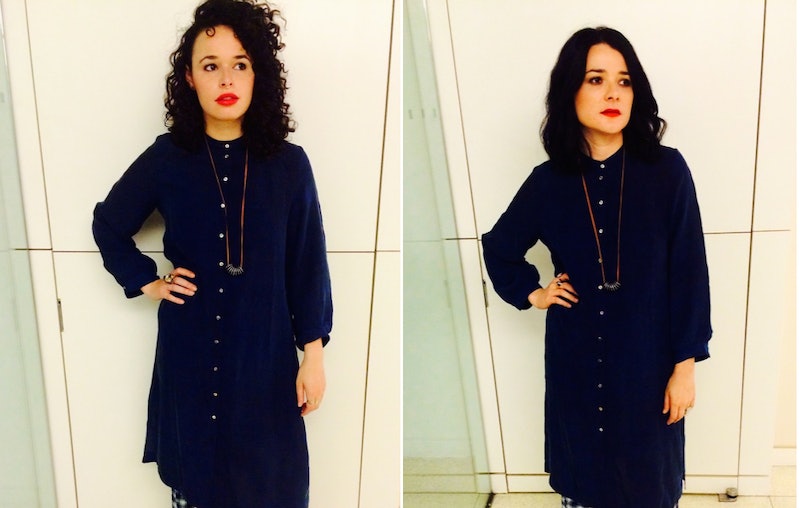 First dates can be nerve-wracking. They're like job interviews with cocktails and a lot of flirting. Flirting makes a first date exciting — the prospect of affection, or sex, creates exhilarating tension that fuels the most passionate of relationships. But, before this flirtatious dance can begin, there is a private dance. It is the dance we have with our wardrobes — the hour we spend deciding just what to wear and how to wear it, all while despairing that we have nothing, in fact, to wear.

I remember for one particular first date, I was feeling rather lazy and decided to wear an old pair of underwear that had holes along the waistband. Over dinner, my date and I hit it off and I went back to his apartment. While in his room, he tried to take off my jeans. I playfully rebuffed him. He looked at me as though I were a kitten he'd been playing with who turned suddenly feral. We kissed, and then fell asleep, he in his boxers, I in my tight, nearly suffocating, jeans. When I recounted this story to my friend the next day, she wisely mused, "Better to be that girl with the mystery than that girl with the holes in her underwear." Needless to say, I never heard from him after that night. But, does what we wear really end up affecting the outcome of a first date? I asked three of my girlfriends, some single, some not, this very question. And then, I tried on their go-to first date outfits, in hopes of finding an ensemble to replace my unsuccessful holey underwear.

Megan is a writer and Professor of English at Parsons and FIT.

No! I had a year of steady first dates and I always felt stressed out. I have a hard time knowing when to end a date. I'm always afraid I'm going to offend the guy, whether I like him or not. I'm the monogamous type.

Why did you select this particular outfit for a first date?

I bought this dress when I was with my ex-boyfriend, and I remember he told me that it looked nunnish. So, after we broke up, I started wearing it on all of my first dates. I feel sexy, and smart wearing it. It was my go-to first-date uniform.

The first time I wore it on a first date, it was with this guy who had picked me up at a bar. He was a calligrapher. On our date, he kissed me, and he put his hand on my back, where there's an opening in the back of the dress so I could feel his hand on my skin, and it felt surprising and sexy. I often think about how my clothing plays into the dance — the flirtation with a new love interest. He ended up rejecting me because of religious differences.

Despite not having the best luck in this dress the first time, I just kept wearing it. And then, I fell back in touch with an old friend from college who I'd gone on one date with many years ago, but he'd never kissed me! But we ran into each other recently, and he asked me out, so I decided that I was going to wear the dress. He walked me home and I thought, "Is this just a hang-out? Are we just friends catching up?" I invited him up to my apartment to meet my cats. As I got up on my bed to open my blinds, I turned around and we were the same height, so I kissed him! I was so nervous!

So are you officially dating your friend from college?

Yes! One day he introduced me as his girlfriend to someone and I was like, "yes!"

How I Felt In Megan’s First-Date Outfit

Megan inspires me to wear dresses! She has great taste and knows how to select a silhouette that is sexy, cute, and smart in equal measures. Wearing Megan’s dress felt fun and flirtatious. At the same time, I felt in possession of my body, and not as though I was on display (as so many dresses can make you feel). I would absolutely wear this outfit on a first date, and I can see why Megan wore it, repeatedly, on hers.

Leah is a costume designer for film and television, and studies fiction at Columbia University.

I don't like going on first dates. I prefer second dates. It's difficult for me to remember that a first date is supposed to be fun because I'm so stressed out — I feel like I'm being interviewed for a job.

Why did you pick this particular outfit for a first date?

It was a day date at a museum, so I didn't want anything too severe. I've also started to wear things that show people who I am fairly quickly — I don't like to show a lot of skin, I'd rather communicate the artistic side of myself. Because I didn't know the guy at the time, I made an effort to not care about him. I was aware that my date was going to be kind of short, so I decided to not wear heels. The top is an indigo-dyed top from India that I bought while visiting the region. So, it conveys where I've been and what I'm interested in.

So are you friends? Lovers?

We have a complicated friendship. We're in constant communication. It's really more of a friendship built on creative energy and sharing. If he sees something, or reads something that reminds him of me, he'll reach out and tell me, and vice versa. I think once we figured each other out, we both felt that is was more of a friendship than a relationship.

How I Felt In Leah’s First-Date Outfit

Leah is an impeccable dresser with an eye for a look that feels familiar but radiates originality. It’s no surprise that she makes her living as a costume designer for television and film. Leah’s first-date outfit shows her singular vision — silver metallic shoes, and an indigo dyed, extra long draped blouse. I love how distinct Leah’s silver metallic shoes and indigo-dyed blouse is. My body swims in it, though shines through its unique details. Who would have thought to pair this outfit with muted colored socks? A style genius, that’s who.

Olivia is a poet and works as a full-time nanny.

Do you enjoy going on first dates?

My current boyfriend is the only one I've really been on a first date with, in the traditional sense of the term. We didn’t meet through mutual friends. I first met him online, through Facebook. I had known about him, and loved his work — he's a pretty well-known comedian. One day, I saw him on the street, and then I left a witty comment on his Facebook page about it, and he instant messaged me right back. When we finally agreed to meet, I thought it was just fun. All the circumstances leading up to the date seemed incomprehensible, so the date didn't even seem real. When we met in person for the first time, there was a nervousness I hadn't felt before. I was also coming out of a serious relationship so I wasn't even thinking about coupling up again.

Why did you pick this particular outfit for a first date?

I went to a poetry reading at the Lillian Vernon Creative Writers House (at NYU) beforehand, so I was dressed more for that than the date. It was one of those dates where we'd met kind of late, and we went to one of his shows where he was doing a set, and we had a drink before, a drink during, and then we went to two wine bars. We were just sort of bar-hopping, and having fun. I didn’t really know what to expect from the evening, since I was basically meeting a stranger. I was late, and I rushed in, and sat down at the bar, and was sort of like, "Oh, hey sorry," as though we were friends.

How long have you two been together?

How I Felt In Olivia’s First-Date Outfit

If someone asked me to describe Olivia’s style, I’d say, “black on black on black.” She confessed to me that the dress in this picture is a simple cotton dress that she’d bought from American Apparel when she was 14, which goes to show there’s nothing more timeless than a utilitarian black dress! I also tend to wear a lot of black, so stepping into her black tights felt natural. It’s an outfit that can go from day to night in a flash — or from a poetry reading to a late-night date with a comedian.