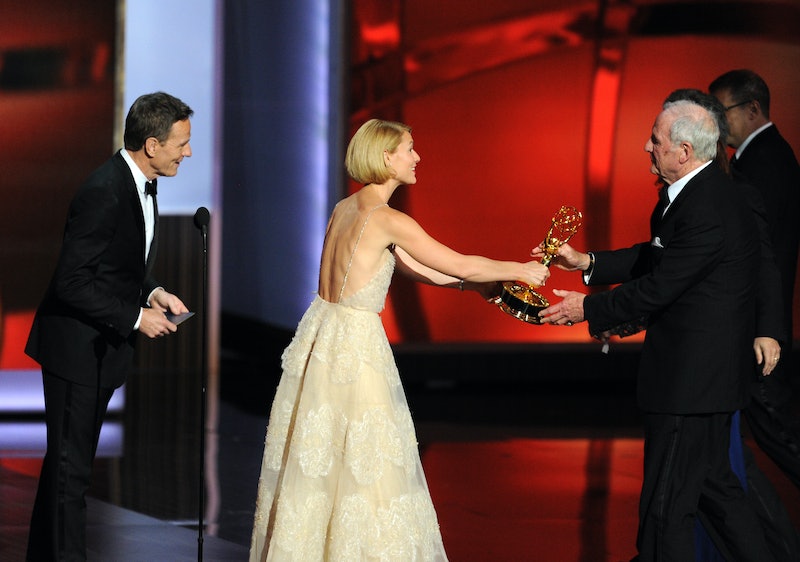 If you don't already, you should probably spend more time in your life listening to the interviews on WTF With Marc Maron. You can read all the New York Times and Vanity Fair profiles you want, people — especially celebrity people — rarely get as real as they do when they unwind with Maron. They really get into the nitty gritty: Robin Williams spoke frankly about sobriety and depression, Elizabeth Banks opened up about her fertility issues, Louis CK had a straight-up "reckoning" — as Slate called it — with Maron himself over their complicated relationship. Maron's most recent interview, with Claire Danes, isn't quite as dramatic, but it is interesting — especially when Danes starts talking about how she sees the two Emmys she's won.

Danes' interview, from the Aug 4 episode of the show, basically takes us through 35 years of being Claire Danes — a state of being many who went through adolescence in the early 2000s desired — from early life (and therapy) in Soho to grappling with tricky character work on Homeland. She's a pretty rad, intelligent lady. And when things circle around to her impressive awards history — she's won a bunch of Golden Globes and two Emmys — she gives an impressively frank, undiplomatic response. Basically she says they don't matter. Transcribed for your pleasure, here's a bit of their conversation, including the great analogy Danes gave to describe awards season:

Maron: That must feel great [to have won two Emmys for this character].Danes: It feels really nice. It feels really nice because I don't...I know that it doesn't matter now, I really know that. I have that privilege of knowing that it really doesn't matter. Maron: If you really know that then it's really like 'nice, okay.'Danes: Yeah! And I say that and then...These things are so weird, these award things. Because they matter — they do, and then they don't. And it's very hard for me to categorize them. I equate it with, like, in junior high, when some guy would come up to you and say 'My friend wants to go out with you' and you'd say 'But I don't know your friend,' 'Well you'll get to know him.' So you start going out with Boy X — in the way that you go out with Boy X in junior high, in that you don't talk to each other for about a month, and then break up. Maron: Sit awkwardly next to each other...Danes: Yeah! And over this time of non-communication I would develop feelings, because that was my job, I'm a good girl that way. But then they'd break up with me — and I'd be like 'I didn't even freakin' know you! And now you're breaking up with me!' So that's kind of what the awards thing feels like: You're tapped, you're courted, and then you've gotta go find a dress, and then you're all involved — and it's totally unrelated to the thing that it's apparently about. And then you feel like an asshole and a loser, like 'What? How did that happen?' Maron: But you won two!Danes: Yeah, you win them, but I've also not won them, I've had that experience and it's like 'O....K."

I'm sure at least one person in the world will call this response to Emmy wins "ungrateful," because both press and people at large sometimes get off on calling famous women that the second they stop bowing down to everyone around them. But this sounds to me more like some wise words from the mouth of a woman who's been in show business for 20 years: She's done the rounds more than a few times, she knows what affects the work and what's just showboating. If you listen to the Nerdist podcast's interview with Anna Kendrick, she says some pretty similar things about her Oscar nomination for Up In the Air: Being nominated for these things is pretty weird, especially when it comes with all these expectations.

On WTF Danes continues on to talk about going through some old stuff and finding the painfully earnest Emmy acceptance speech her 15-year-old self had written after her first nomination (and before her subsquent loss) for My So-Called Life. The festivities start around 74 minutes in, but the whole interview's worth a listen.