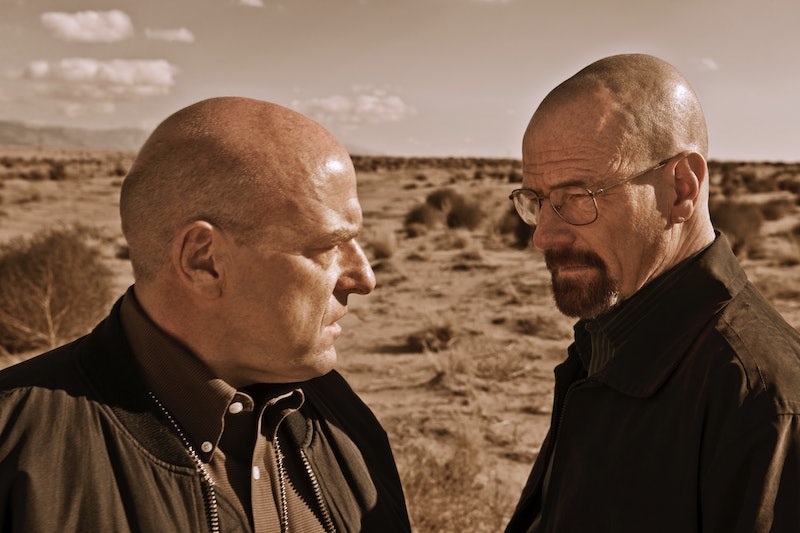 On Sunday night's Season 5 Part 2 premiere of Breaking Bad, nothing new was revealed, save for the continued existence of the ricin in Walt's future. Still, audiences tuning into "Blood Money" were left shocked. Not because we witnessed a death, or something else that typically leaves TV viewers reeling after anticipated TV. But because Breaking Bad creator Vince Gilligan shocked us by doing what so many show chiefs fail to do: He moved the storyline along.

The final moments of "Blood Money" saw Hank (Dean Norris) confronting Bryan Cranston's Walt (or was it the other way around?) after finally uncovering Heisenberg's true identity. It was a scene five seasons in the making — we had watched Hank's unflinching efforts to bust the meth kingpin for years. But we had also only watched Hank cope with the realization of Walt's identity for less than an hour, following the revelation in the Season 5 Part 1 finale. The confrontation on Sunday night's premiere was unexpected, with Breaking Bad fans expecting the pivotal moment to be saved for an episode far in the future, if not the series' final episode.

Because, in a way, despite the fact that The Sopranos changed television in 1999, we're still accustomed to a network viewing experience. Even programs like Lost didn't buck convention surrounding timing — we were still told to be patient while trying to discover what the deal with Ben was, or why Jack had a beard. Surely, since we waited five seasons to watch Hank discover Walt, we would wait longer to watch Hank confront Walt, right? Especially considering Gilligan had so far won accolades for Breaking Bad after proving slow and steady wins the race. (Remember how Season 1 of Breaking Bad could have been subtitled Breaking Bad: Coughing and Breakfast?)

But Gilligan proved that convention very, very wrong in "Blood Money." The chilling confrontation between Hank and Walt was more than satisfying for TV viewers who sat at the edge of their seats, but, despite the fact that Gilligan has more than earned our trust and respect, a bit concerning. After all, for every TV series that has suffered from following convention (ahem, Lost), there's a TV series that has suffered from breaking convention.

The second Hank shut the garage door on Walt, we were struck with a sense of familiarity. During Season 2 of Homeland, the series shocked viewers by (spoiler alert) showing Carrie (Claire Danes) confront Brody (Damian Lewis), changing the entire fabric of a series that had spent much of its first season making viewers even wonder whether or not Brody was a good or bad guy. What started as a heart-pumping cat-and-mouse thriller turned into a disturbed romantic drama, leaving Homeland with few other plot elements to create build-up for. The suspense of Season 2 was all but gone; every big bad simply paled in comparison to an American terrorist pulling the wool over everyone's eyes (except, of course, for Carrie's crazy eyes).

The tradition of too much too soon dates back even to Bruce Willis and Cybill Shepherd's Moonlighting, which delivered an anticipated hook-up too early, eventually killing the series. So will Season 5 Part 2 of Breaking Bad follow suit? Will the confrontation between Hank and Walt only eclipse every other revelation of the final eight episodes of the series?

Luckily, all signs point to no. American Horror Story: Asylum and Scandal both successfully featured big reveals in the first six episodes of their 2012 seasons, and Breaking Bad has plenty more reveals on its way to fill out the next seven (only seven?!) episodes. (And we're most definitely calmed after seeing Breaking Bad cinematographer Michael Slovis talk about Part 2: "It’s going to redefine last seasons of television, which are almost inevitably disappointing. This one will not disappoint. I’ve seen all eight episodes. I’ve seen it through to the end, and I sat in front of my screen crying, myself, alone, during the last couple of episodes.")

But series like Breaking Bad will no doubt influence a bevy of TV series trying to follow suit, many of which won't be led by a man who navigates story and plot as deftly as Gilligan. So, yes, speed will change the way we watch television in the future. But if only the future looked a hell of a lot more like Breaking Bad. Because Gilligan and Breaking Bad might be slow and steady, but a final surge is most definitely necessary to win the race.

More like this
The 'Teen Wolf' Creator Revealed If 'Wolf Pack' Takes Place In The Same Universe
By Grace Wehniainen
The 'Gossip Girl' Reboot Creator Is “Looking For A New Home” To Air A Potential Season 3
By Brad Witter
'Succession' Season 4 Will Be An "Absolute Banger" According To Cousin Greg
By Bustle Staff
All The ’70s Easter Eggs You Missed In 'That ’90s Show'
By Grace Wehniainen
Get Even More From Bustle — Sign Up For The Newsletter
From hair trends to relationship advice, our daily newsletter has everything you need to sound like a person who’s on TikTok, even if you aren’t.