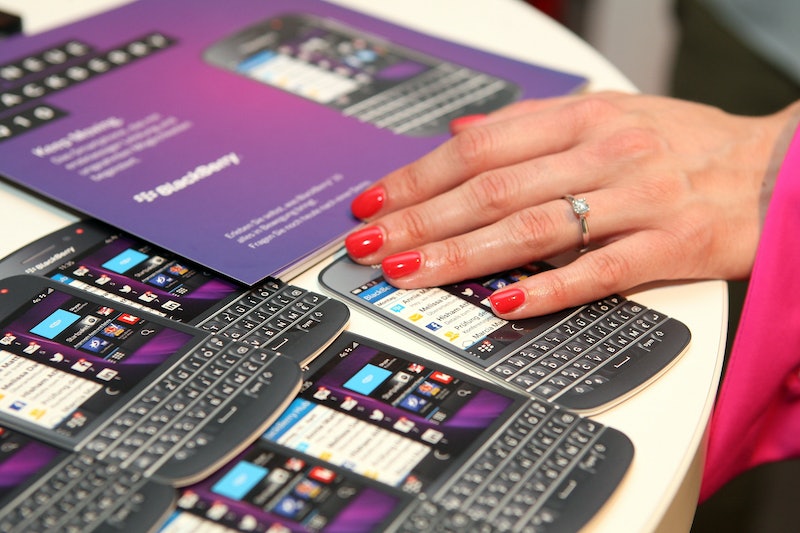 BlackBerry's shares, revenue, reputation (and, uh, everything) continues to plummet. The company's latest make-or-break attempt, the much-delayed BlackBerry 10, has fallen into the "break" category — and now, the company is reportedly considering selling.

A BlackBerry Ltd. (formerly Research In Motion) director, Timothy D. Dattels, announced Monday that "given the importance and strength of our technology, and the evolving industry and competitive landscape, we believe that now is the right time to explore strategic alternatives."

In tech-speak, this means they have absolutely no idea what to do next.

The company has confirmed that an independent board is reviewing the company, and will advise the (presumably quite grouchy) directors on their next step.

It's hard to believe now, but BlackBerry was once the Apple of the smartphone market. With its groundbreaking BBM messaging service, fast processor, and fresh interface, the company was once worth $50 billion. It was nicknamed "CrackBerry" for its addictive properties, and even President Obama absolutely could not put his down.

The phone still popular in countries like India and Indonesia, but in America, Blackberry has been described as the "black sheep" of the smartphone market. From the New York Times' "Quick! Hide the BlackBerry":

Rachel Crosby speaks about her BlackBerry phone the way someone might speak of an embarrassing relative. “I’m ashamed of it,” said Ms. Crosby, a Los Angeles sales representative who said she had stopped pulling out her BlackBerry at cocktail parties and conferences. In meetings, she says she hides her BlackBerry beneath her iPad for fear clients will see it and judge her.

Poor Crosby isn't alone. One of the first policies Marissa Meyer implemented as CEO of Yahoo was to replace all her employees' BlackBerries with iPhones, and BlackBerry has lost 92 percent of its shares since 2007. It now controls three percent of the market. Windows Phone is doing better than that. Yikes.

The new Blackberry 10 was heralded as the thing that would change the tide for the ailing company, with brand-new, established directors heading up the model. Because it was the model was delayed and had little edge on iPhone or Android, it didn't change much of anything. The term "make-or-break" was thrown around a lot during the run-up to the phone's arrival date, which should logically mean that the company is now, actually, broken.

So who might buy BlackBerry? Well, according to rumors, Microsoft looked over the company and decided to pass. (Awkward.) Apple and Google won't bite because the model is in direct competition with their own. The company could be taken private, which would remove the embarrassment of having to share quarterly profits (or more losses), but that option wouldn't have any immediate upsides.

Another option would be for BlackBerry to license parts of their technology to turn a profit.

And speaking of making money: the iPhone 5S now has a (sort-of official) release date: Sept. 10. Though Apple never, ever confirms or denies release dates, media sources have confirmed that this is the case — and they're usually right. Rumors are swirling that the new model will be named the iPhone 5S, and will be unveiled with or without a brand-new, cheaper set of colored models (the 5C.)