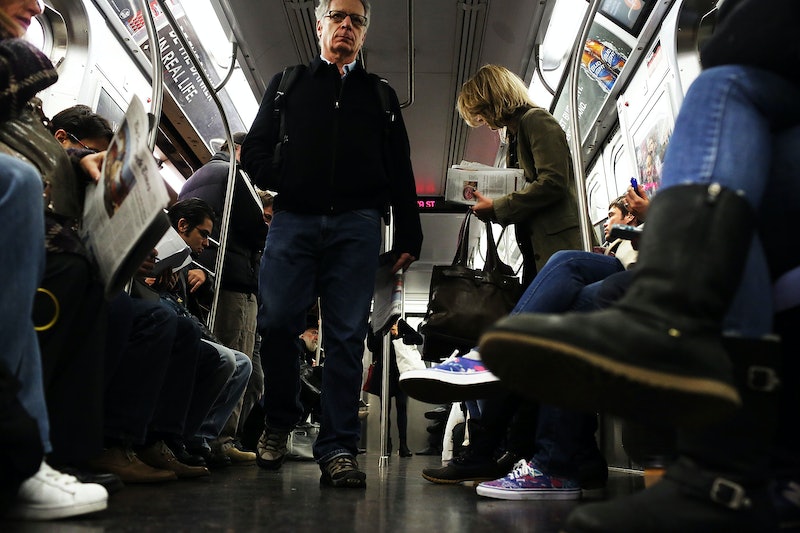 New Yorkers, get ready to let out a collective "Nooooooo!" Bed bugs were found on the N train this past week — at least three N trains, to be exact. Two of the infested trains were taken out of service on Sunday, while a third was sent to the Coney Island subway yard for fumigation on Tuesday. If you lived in New York City in 2010, then you most likely remember the nightmarish bed bug infestation that year, which nearly crippled the city like some kind of biochemical attack. Could it be happening all over again?

Not that you need to be reminded, but bed bugs are vile, life-ruining parasites that feed exclusively on blood — your blood, as you toss and turn in your overpriced NYC studio at night. Bed bugs burrow into everything — furniture, clothing, books, even electronics. They are notoriously difficult to eradicate, and processes can require either extremely hot temperatures, freezing temperatures, or diatomaceous earth, a powder made of hard-shelled algae that sucks the hydration out of bed bugs' exoskeletons and kills them. In other words, bed bugs are not of this planet; bed bugs are what nightmares of made of; bed bugs make you wish you had cockroaches instead.

Normally, bed bugs favor dark corners and crevices, only coming out at night to feast. So how did they make their way onto the always-lit, generally crevice-free N train? Are they ... evolving? I shudder at the thought. And so do other New Yorkers, upon hearing the alarming news.

According to the New York Daily News, some of the bugs were found in the seat cushions in the train cars used by the conductors and motormen. That makes more sense, since those areas are darker and there are more small spaces for the evil creatures to burrow into. So that would make the prime suspect in the N train bed bug infestation case a train conductor. But really, it could have been anyone, since, according to a Daily News-Marist poll, one in 10 New Yorkers have been cursed with bed bugs. That's more than 800,000 people. A solid chunk of that number probably go to Astoria on the N train now and then.

So what should you do if you happen to spot one of these blood-sucking, spirit-crushing pests on the subway? The way I see it, you have two options: You can either shroud yourself in plastic à la Bubble Boy so bed bugs can't attach themselves to you and follow you home, or you can carry around a Dirt Devil with you everywhere you go and do a quick vacuum before you sit. Getting a beagle and having him by your side at all times is optional, but preferred. But whatever you do, don't pull the emergency brake. New Yorkers hate that even more than bed bugs.