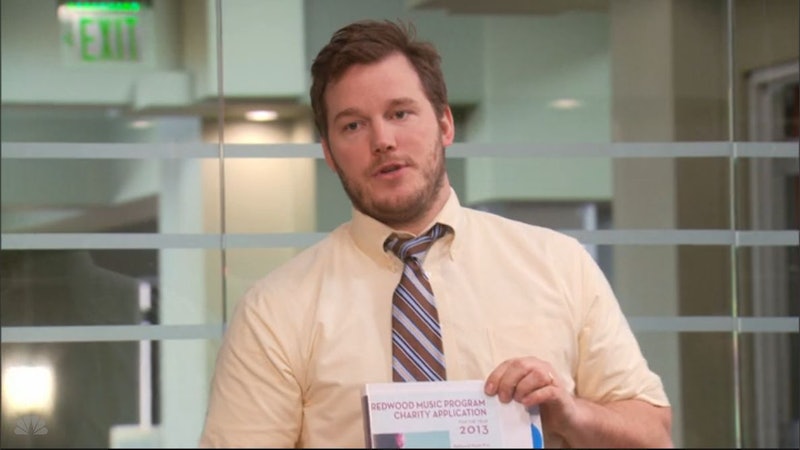 So, now that Guardians of the Galaxy has finished filming, one would assume that the man who so flawlessly portrayed Peter Quill, Chris Pratt, would be busy eating literally everything possible to get rid of that hot, buff bod he acquired for the role so that he can get back into character as the lovably pudgy Andy Dwyer. It's Parks & Recreation's final season! We can't have a buff Andy strutting around Pawnee, looking like the lead in a Marvel superhero movie! The Andy we all know and love couldn't even run .

But wait — Pratt may be done shooting Guardians of the Galaxy, but there's still an already confirmed sequel on the way for a 2017 release date, which, yes, is far off, but it would be much easier for Pratt to try to maintain at least some of the weight loss he managed between now and then rather than to gain it all back only to lose it in, like, one year. Also, there's the new Jurassic Park sequel, Jurassic World , that he's starring in as well — and that's currently filming. All roles that suit Chris Pratt, but perhaps not Andy Dwyer.

So, it looks like Parks & Recreation's final season will see an even buffer Andy than ever before after all. Luckily, the show's gone through this before twice (once when Pratt got buff for Zero Dark Thirty, then again after he gained it all back only to get buff again for Guardians of the Galaxy last season), so there's some basis for how they'll go about acknowledging the fact that Andy is ripped now: Which is, to say, they won't mention it at all. As creator Mike Schur stated before the premiere of season 6 (when Pratt first got buff for his role as Peter Quill): "I don't think beyond a little joke about it that we'll end up doing anything significant. We're not going to suddenly say that Andy became a fitness nut because that doesn't ring true."

Fair enough — continuity-wise, it doesn't make sense for anyone to really mention how different he looks, and making a joke about it might end up being too meta anyway. However, if you disregard that logic, it's hard to deny that, realistically, Andy's friends and family in Pawnee wouldn't say anything. Pratt looks even more buff now than when he first got ripped for the role of Peter Quill, so it's kind of impossible not to notice now. Case-in-point: That image, right up there, is how Chris Pratt as Andy Dwyer used to look. This is how he looks now:

Yep. Lemme repeat that. Before:

That said, since we won't be getting any major on-screen reactions out of the characters in the show, there's probably no harm in imagining how they'd react to Andy's newly acquired buff bod. With GIFs, of course, because it's 2014.

Ben would look at the camera crew, stunned and confused.

April would be super into Andy's new look...

But mostly because it would mean that other women would be throwing themselves at Andy, giving her the opportunity and motive to cut them.

Ann would definitely not understand why Andy didn't look like this when they were together.

Tom would try to convince Andy they should pursue modeling together.

I firmly believe that Donna's reaction would be identical to Retta's actual reaction to seeing that picture of Pratt all buff at the gym:

So that basically translates to:

Ron has always been somewhat of a fatherly figure to Andy, so he'd be proud that Andy has achieved optimum strength and agility.

They would celebrate with steak, eggs, and bacon.

Jerry would be happy for Andy, then he'd mess it up somehow, so this would happen.

Jean-Ralphio would be so into it, he'd try to make Andy be his wingman at the Snake Lounge.

"Andy Dwyer! You literally look like a superhero in a Marvel movie."