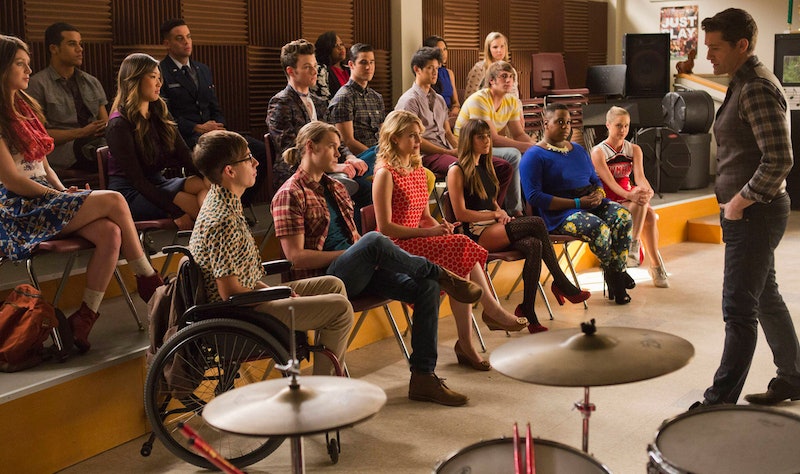 Well, this is... interesting: Glee 's final season will be welcoming not one but six new characters. More specifically, six new high schoolers. There's really no escaping that this season will be spending buckets of time back at McKinley. TVLine's got the full scoop on all the new characters, but here's the gist: You've got a "post-Glee gay" who's a "football stud" (which I think in Glee jargon just means un-stereotypical?) an underdog kid who's "Chubby and shy with a voice like Otis Redding," idiosyncratic twins, and an ambitious girl who's at McKinley because the Warblers rejected her.

From what I can tell, this seems like another pretty classic Glee reboot — the high school kids of the last two seasons didn't really fly with the masses, so they're trying again in an attempt to bring Gleeks back to their "roots" before the show bows out for good. This makes sense, and it should be noted that the new kids here aren't quite the copy-pasted tropes they tried to replace the originals with last time. As Murphy told TVLine at the beginning of the summer, "The last season is really about the importance of arts education in our high schools." Oh boy.

This is all ... fine, I guess? Part of what led to the eventual abandonment of the non-original high schoolers in the second half of Season 5 was that audiences could immediately sense that they were just there to rehash the same plots and dynamics we saw in the first season. In order for this new batch to work, they're going to have to be very well cast and very original. Hopefully Murphy realizes most of his audience isn't watching for arts education at this juncture, no matter how important arts education may be — Glee isn't the Glee from Season 1 anymore.

And what the hell does "post-Glee" even mean?