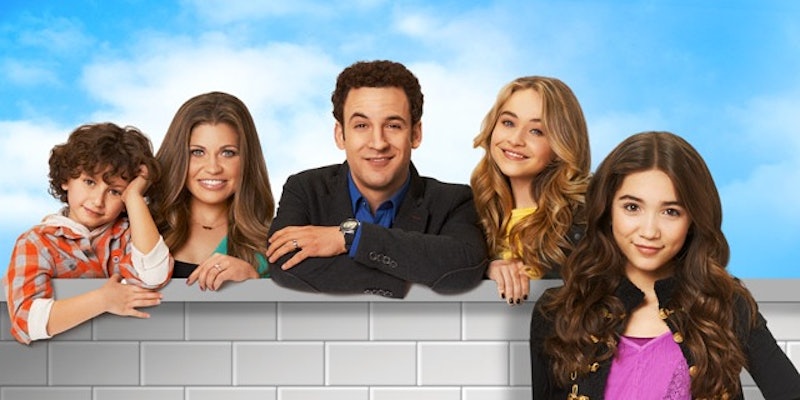 Boy Meets World was originally on ABC, which, in addition to coming out in the 90s when television censorship standards were more lax, was the reason why they were able to tackle some heavy issues like alcoholism, cults, infidelity, and death. There are some episodes of Boy Meets World that you have to watch online or buy on DVD because they either aren't shown on television anymore or are heavily edited when shown on TV these days. Boy Meets World was the kind of show that grew up as its audience and its actors grew up. I'm not confident that's going to hold true for Girl Meets World.

Take the heaviest episode of Girl Meets World so far, at least in terms of how it was promoted. In "Girl Meets the Truth", Riley Matthews, the daughter of Cory and Topanga Matthews, finds herself in a jam when she suspects her best friend Maya Hart of having stolen an expensive locket and when she lies to her friend Farkle Minkus about his performance in the school play. When Maya gets angry at Riley for telling the truth and Farkle's ego swells and ruins his life because Riley told him a lie, Riley looks to Cory for guidance on how to tell when it's okay to tell the truth and when it's okay for a little white lie.

From the trailer for the episode, the audience was led to believe that the fact that Maya had stolen a locket was going to be a much larger part of the episode than it was. In the end, Maya didn't even really steal it. It was left in the lost and found at a store for months before she told the store owner that it was hers, but Riley reacts as though Maya punched a hole in the glass, broke into the store, and stole the locket while laughing maniacally and twirling a mustache.

At this point, all of the characters on Girl Meets World have serious potential. Maya Hart has the most emotional depth out of all of them so far, having opened up about her rough family life several times, and Cory and Topanga are as fabulously hammy as ever. The rest of the cast are one-dimensional joke machines who really need some fleshing out — including Riley Matthews, the main character.

I'm not saying that Disney has to make the leap from the thrills of a first crush to giving life lessons on eating disorders and the criminal negligence Maya's mother appears to be putting her through, but season two is their opportunity to step up their emotional game with Girl Meets World. We already know that Disney can tackle the big issues. Remember the That's So Raven episode about modeling in which Raven-Symoné basically said "screw you" to the narrow standards of physical beauty?

"That's So Not Raven" came out in 2004, so it would be really sad if Disney was more progressive in the lessons its children's programming could teach ten years ago than they are now. There are a lot of teenage issues that Boy Meets World didn't get to cover properly because it was told from a male point of view; Girl Meets World could be the opportunity to do right by teenage girls. Disney just needs to give it the chance to grow as its audience does.

More like this
Man Meets Politics: ‘Boy Meets World’ Star Ben Savage Is Running For Congress
By Jake Viswanath
Ashton Kutcher Wants Danny Masterson “To Be Found Innocent” In Rape Retrial
By Jake Viswanath
This 'Gossip Girl' Wardrobe Error Has Gone Viral On TikTok
By Alyssa Lapid
All The ’70s Easter Eggs You Missed In 'That ’90s Show'
By Grace Wehniainen
Get Even More From Bustle — Sign Up For The Newsletter
From hair trends to relationship advice, our daily newsletter has everything you need to sound like a person who’s on TikTok, even if you aren’t.