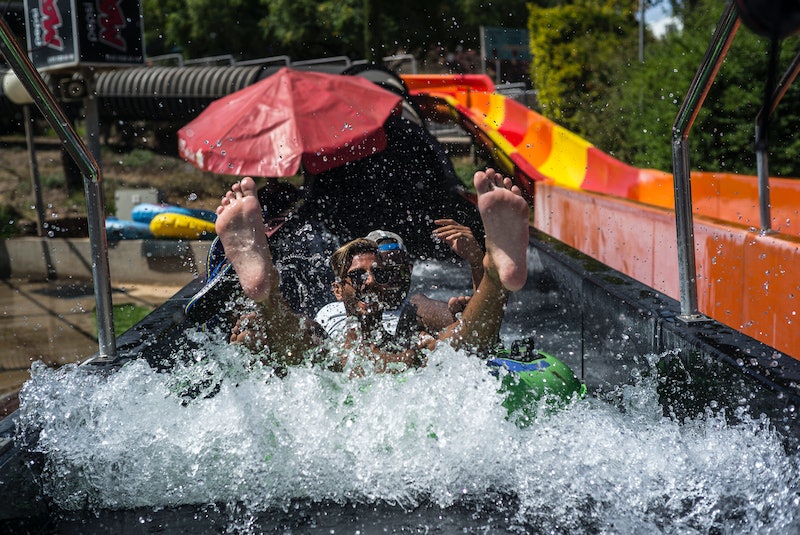 Here's how you can tell you're a real daredevil: You prefer theme parks known for their dangerous (and fatal!) histories. If that sounds like you — and if so, I'm not sure I know what to say — this summer has probably been an exciting one. That's because New Jersey's infamous Action Park has re-opened for business after a nearly 20-year absence, letting New Jersey residents return to the thrill-ride hotspot that saw six people die from 1980 to 1987.

This is the sort of legacy that most theme parks would be desperate to escape. But for Action Park, the history of danger has fed into a sort of strangely appealing cult legacy in New Jersey. The park was shut down in 1996, and re-opened two years later under different management as the Mountain Creek Waterpark. But in April, everybody nostalgic for the grisly old place was given reason to cheer: The original owners re-acquired the property and decided to restore it to its former glory.

Of course, not everything is quite the same — while the park's dangerous history is undoubtedly associated with the Action Park name, the management is promising that things will be safer this time around. New precautions, oversight, safety gear, the whole deal. And that's a relief, because frankly, you wouldn't have caught me dead at Action Park 30 years ago.

Here's a brief rundown of the park's horrifying 1980s.

But the park's notorious reputation goes beyond its body count. They even once had this monstrosity of a tubular water slide, the infamous "Cannonball Loop."

Just look at that thing. You don't even have to get within 100 feet of it to predict the problems it's going to have. According to Weird NJ, this ill-fated attraction was shut down in 1985 by the state's Advisory Board on Carnival Amusement Ride Safety, and an employee at the time told the New Jersey Herald that it caused too many bloody noses and injuries for it to remain in operation.

All in all, it makes up a wealth of memories that understandably loom large in the minds of its former patrons, and could make them want to pay a return visit — under safer circumstances, hopefully. It's that weird brand of nostalgia that creates a market for T-shirts like this, after all.