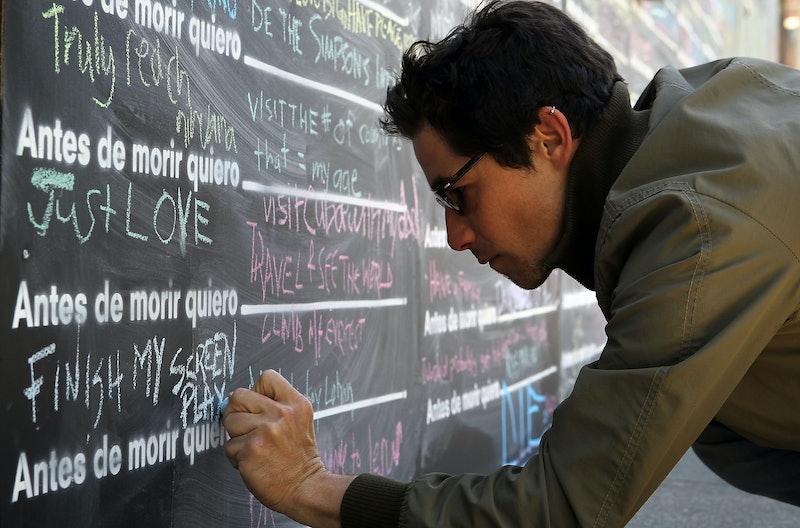 The second you tell someone you're a writer, the weird responses start rolling in.

"Does anyone read anymore?"

"I had a great-aunt who was a writer, too. She died broke and alone."

"Have you tried investment banking?"

Perhaps the most common response that published writers receive is the "idea for a novel" trope, wherein a well-meaning friend, family member, or stranger informs the bright-eyed young novelist what their next book should be about. The "idea for a novel" is usually imparted to the writer with world-weary gravitas; after all, the person giving out this billion-dollar idea would absolutely write the book themselve, if they only had the time. But as it is, they're far too busy with their real jobs, and so they pass on their plot to the nearest novelist like they're throwing a life jacket to a drowning sailor.

I asked eight writers if they'd ever gotten a particularly memorable plot idea from a non-writer, and everyone had a tale to relay. These anecdotes may sound ridiculous, but if you look closer, each one is a miniature story about humanity's innate love of creativity and desire to be heard. (Alternate moral of the story: People think writing a book is easy.)

"I'm ardently pro-choice, which apparently my distant relative was unaware of when she suggested I should write a pro-life novel that's a take on A Christmas Carol (Scrooge would be an abortion doctor who gets visited in the night by the ghosts of fetuses that he terminated and made to see the error of his ways by going to "look in" on the lives of his former patients, all of whom are now exceptionally miserable). My response was to immediately excuse myself to the bathroom."

2. Laura McBride, author of We Are Called to Rise

"I've been pondering this for a week, and I find that most of my stories share this trait. They are all suggestions from the suggester's life experience. The story starts or ends with: I know my story would make a great book, but I haven't had time to write it. Are you interested?

"On a generous day, I think about how human it is to want to be seen, known, and validated. On many others, I bite back the urge to say: 'Of course, what else would I do with my time?'"

"I went on an OkCupid date with this guy who, after presenting me with a jumbling array of life history — from injuries sustained jumping out of a plane in Afghanistan to raising an ex's children to court-ordered anger management therapy for assaulting said ex — insisted I should write a novel about his life. My thinking was, Your truth is way stranger than fiction. Naturally, he was living in his mom's house at the time. Mummy has a comfortably high apartment on Manhattan's Upper East Side."

4. CJ Hauser, author of The From-Aways

"This does, in fact, happen all the time. Mostly with my family, who always seem to be ending their own personal stories with 'Oh boy, this is going to end up in a story someday,' when, likely as not, it won't."I was once interviewing a bunch of roboticists and firemen for a piece I am currently writing about on, well, robots as they might be used as first-responders. When the roboticists and firemen found out I was primarily a fiction writer and working on a new novel, they told me, 'Forget that book. You should write a book about us. We're interesting as shit!' The thing is, they weren't wrong."

"One of the most charming suggestions came from my father, in his gorgeously mangled English. (We are ex-Soviets, native language is Russian.) I had been dating someone, and then met someone else (who was from Iran), and he wrote (via text):

I have new idea for your next book. It is a triangle: Iran, America, Russia. Your new Iranian friend, you and your American friend in Russia! We all different, but we all the same. Sorry for that idea, but may be is good? Big love!

"More often, I get people telling me I should turn something into a story. This is my favorite example of that:

"It's funny and poignant to me, all at once, because it's my mom sharing an idea she thinks I could write about, an idea she thinks resembles what she sees in my writing. And it's also a pretty good idea! For a while I thought about actually writing that story, but in the end, it would never be what she was expecting. I'm sure she'd be fine with that, but I don't know if I would be, ha."

My bar mitzvah was really something. There was a private home next to where the reception was being held, which, by the way, was a girls' yeshiva — my parents really went all out. Anyway, my friends and I went outside while the parents were eating. I noticed that the windows of this home were open (it was during the summer), so, at my suggestion, we went inside, got as much food as we could carry, went out and proceeded to throw the food through the windows into the house. When the manager of the yeshiva saw this he grabbed me in a choke hold (he correctly assumed that I was the leader), while screaming at me, until his wife came to pull him off me while also screaming: "That's the bar mitzvah boy!" This should give you an idea of how serious I took the passage into manhood. Maybe you could use this story in your next book.

8. Megan Stielstra, author of Once I Was Cool

"My six-year-old son would like me to write a book about Princess Leia and the Force. 'Luke got three whole movies,' he informed me. 'Shouldn't Leia get at least one?' Not gonna lie: I thought that was pretty goddamn awesome. I was like, Kid, I'm buying you a pony."

I spent quite a lot of time investigating the most easy and lucrative e-book genre.... Baby Boomers who are retired with good pensions are exploring sex at last in interesting ways. This could be tapped into easily with the adventures of a post menopausal woman discovering sex for the first time and the men she runs across in her adventures. Your book is unique in naturally incorporating the day to day expression of one's life force in a way I have never seen before in literature (e.g. Slava's erection when various women move to hug him after his grandmother's funeral). I think you and I could whip this out in no time flat.

10. Eric Lundgren, author of The Facades

"We were in a friend’s backyard around a fire. The smoke poured toward me no matter where I parked my chair. It was one of those nights when I wanted to identify as a public librarian, not a writer, but at some point I got outed. 'You know what someone should write?' said the blond guy across the fire. 'Somebody should do an update on the classics, like Huck and Jim on the river, but 21st century.' Yeah, I thought, someone should do that. Like Jon Clinch, who wrote Finn, or Norman Lock, whose novel The Boy in His Winter follows the famous raft from 1835 to 2077. Now that I look into it, Paramount Pictures also has a reboot in progress, and there was that 2011 edition of Huck with all the bad words scrubbed away. Pretty well-paddled waters."It is hard to avoid Twain where I live. He’s left a wake. I pass through his hometown of Hannibal every time I travel north to visit my parents. In downtown St. Louis there’s a transient hotel named after him, and every morning my bus passes the shuttered Huckleberry Finn Youth Hostel. I postponed reading him for a long time. Something about the raconteur, showman Twain bothered me. But he won’t leave me alone. My own memoirs, I realize, could be called Life on the Mississippi. Aside from four years of college on the West Coast, I’ve spent my whole life tethered to it. Childhood in Minneapolis, a year in Baton Rouge — I remember the bonfires the Louisianans lit along the levees at Christmastime — and the past decade in St. Louis. And the thing I’m working on now — well, in its own weird way, it is a kind of Mississippi River novel. So maybe that guy across the fire wasn’t so far off. And the smoke could have been spelling out the reports of my death…against the darkened Missouri sky."