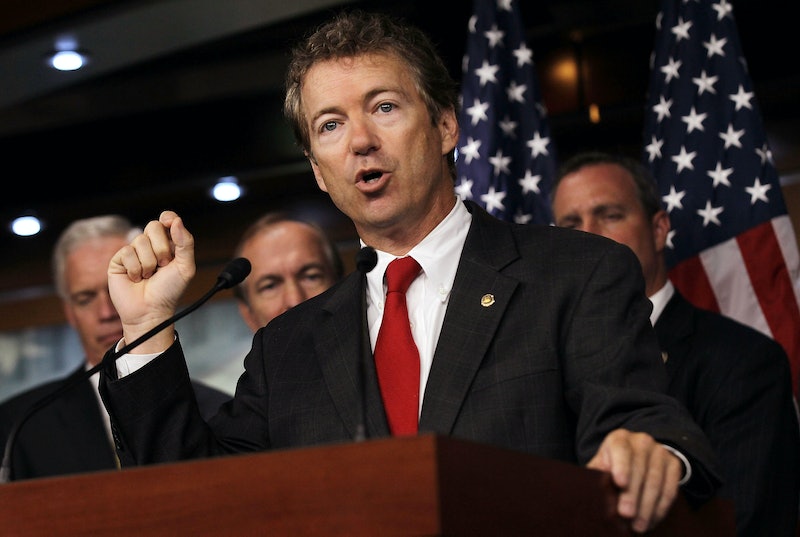 The Republican Party has an image problem, and its members know it. If you haven't guessed, the image has to do with how the GOP tends to treat its women constituents. But it's totally just an image problem, and not about actual women's health policy, claims Sen. Rand Paul. While speaking in Iowa on Wednesday, Rand Paul said the GOP doesn't oppose birth control, nor is it trying to ban it. No, the GOP just wants to make it nearly impossible for women to access contraception.

After being asked by an audience member if the GOP's goal is to "keep [women] barefoot and pregnant in the kitchen," Paul said:

For the past several years, [Democrats] have been characterizing us as somehow, we're some troglodytes who really are against birth control. There may be various opinions in here but I think almost nobody in here wants to ban birth control. I don't know any Republican politician who does. ... They've concocted this whole thing in some Madison Avenue advertising agency that there's a war on women. And I kind of jokingly say, yeah if there was, the women won.

He added that the Hobby Lobby Supreme Court ruling, which said closely held for-profit companies had the right to deny contraception coverage to employees, wasn't actually about birth control. It was, of course, about religious freedom and "whether a business should be able to choose what sort of insurance they buy."

Rand Paul has repeatedly tried to restrict women's access to healthcare and sponsored legislation that could ban some of the most commonly used forms of birth control.

So, which is it? Are Republicans truly trying to ban birth control, or is this just a false flag created by the Democrats? Well, it turns out Paul may not have been entirely truthful when he said no one wants to "ban birth control."

Paul is right that not many Republican politicians have introduced, backed or hypothesized legislation that calls for an explicit ban on birth control — save for former presidential candidate Rick Santorum, who would repeal Griswold v. Connecticut if he could. That landmark 1965 Supreme Court case struck down a ban on providing married couples with contraception — yes, married couples — claiming it violated a couple's right to privacy.

Although Paul and his colleagues haven't said anything as extreme as Mr. No-Sex-For-Fun Santorum, they have put forward legislation that can lead to back-door bans on contraception, ranging from overreaching conscience clauses to personhood bills granting full rights to fertilized eggs. In fact, Paul was the one who introduced the personhood bill, known as The Life at Conception Act, in the Senate in 2013. The bill would have not only applied to abortion, but would have also outlawed several types of birth control, including IUDs and the morning-after pill.

Paul said at the time:

The Life at Conception Act legislatively declares what most Americans believe and what science has long known – that human life begins at the moment of conception, and therefore is entitled to legal protection from that point forward. The right to life is guaranteed to all Americans in the Declaration of Independence and ensuring this is upheld is the Constitutional duty of all Members of Congress.

Let's not forget the Blunt Amendment, which proposed a conscience objection for all employers who morally disapprove of providing birth control coverage — similar to the recent Hobby Lobby ruling. The amendment, tacked onto a Senate highway bill in 2012, was supported by Paul, as well as GOP star Marco Rubio. Although these employer-objection bills don't explicitly ban contraception, they do limit access to affordable birth control to the point that it may be too far out of reach for many women.

According to the Center for American Progress, prior to the Affordable Care Act's no-copay contraception mandate, women paid nearly $1,000 out-of-pocket for the birth control pill, the patch or the IUD. That amount may be nothing to a Washington politician such as Rand Paul, but for women who make just $27,000 a year — the average income for women between the ages of 18 to 34, according to CAP — that's a lot to shell out because of an employer's conscience.

Birth control may still be legal in the United States, but just like abortion, it's not accessible to everyone.