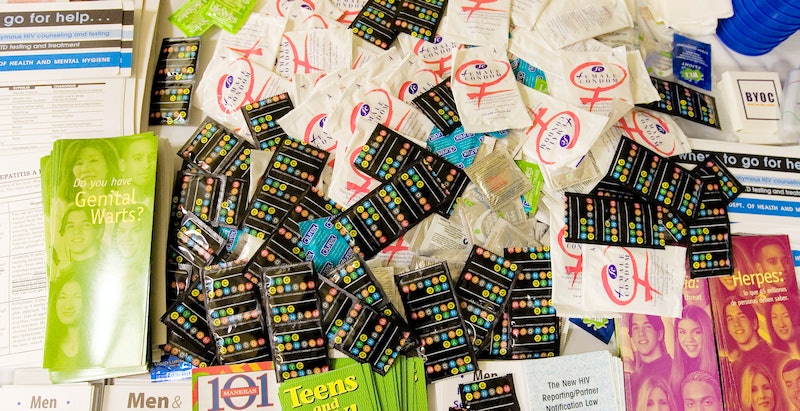 It's probably not marked on your calendar, but Sept. 16 is an important date to remember — it's Global Female Condom Day (GFCD). Did you know that last year, people from 54 countries and 250 organizations participated in awareness-raising events in honor of female condoms? If not, you'd be forgiven. Female condoms are a bit of an underrated enigma; few of us know much about them, and fewer of us have used them, which is exactly why advocates are on a mission to sing their praises across the world. In addition to being a celebration of female-controlled contraception, GFCD is an opportunity for sexual and reproductive health advocates to demand more education and access to female condoms.

Back in July, while delegates were rubbing elbows with Bill Clinton and Sir Bob Geldof at the 2014 International AIDS Conference, I was strolling through the Melbourne Global Village exhibition centre (the free part for plebs). Organizations from sex workers’ rights activists to country-specific support for people living with HIV were handing out female condoms like they were sticks of rubbery gum. I had never seen so many female condoms in one place. In fact, prior to that, I can’t remember seeing a female condom outside of its packaging at all. Why all of a sudden the focus on female condoms? Aren’t they supposed to be awful and huge? Have they always been a thing and I've just been completely out of the loop?

As it turns out, the female condom is an asset in the global fight against HIV/AIDS. Little did I know that the little ringed sack has the potential to change the world. The first step, of course, is to raise awareness of its powers and increase access for women all over the country and the world.

The female condom’s case is not made easier by its name; the “female” modifier implies that it’s a deviation from the condom norm: the male condom. In the same way that a female doctor is simply a doctor, or a female pilot is otherwise known as a pilot, it would be nice if the female condom was just... a condom. Perhaps with increased use and knowledge of it, the female condom will take its rightful place on the podium alongside the male condom as players in the fight against unplanned pregnancy and STIs.

In honor of Global Female Condom Day, it's time to clear up a few myths still hovering around the elusive female condom. Here are six things you need to know in order to A.) get excited about using one, and B.) help educate others about its many benefits:

I know. Using a female condom can seem a little, well, daunting, especially if you've never tried one before. For one thing, it looks big. There are multiple rings. Inserting it can require some... maneuvering. But it's actually easier than you think. The National Female Condom Coalition shows you just how to do it.

2. There’s variety! And there are brands!

In 2003, makers of the first female condom (FC1) realized that not only was their product expensive to manufacture, the uptake by women was minimal. They decided that it was time to give the FC1 a makeover using materials that were latex-free, could be used with water-based or oil lubricants, and warmed to body temperature. Finally, in 2009, the FC2 was approved for use by the FDA. It was decided that the new and improved FC2 should be rebranded to reflect its makeover, so packaging was redesigned and training was re-vamped.

Since the development and approval of the female condom, several brands have come onto the market. As is the case with male condoms, there is no “best" option, and users can pick the best product for them based on personal preference. Already, there is variety: Cupid condoms have been approved by the World Health Organization and United Nations Population Fund. There is also the Origami female condom, which is expected to hit shelves in late 2015, pending approvals. The most popular female condom is still the FC2, but the market is diversifying as the call to make female condoms more widely accessible grows louder.

In fact, it’s the only dual-action, woman-initiated birth control, period. That is: it protects against both pregnancy and STIs. This is one of the reasons why the female condom is so crucial. While the male condom is slightly more effective (with approximately two out of 100 uses resulting in a pregnancy as opposed to five out of 100 with the female condom), there can be several downsides to using one. First, some men complain about the way that a male condom feels, or maintain that they can’t get an erection when using one. Usually, my response to that complaint is to suck it up. However, in some cases it may be the true that a couple needs to find an alternate barrier method that works for both of them. The female condom isn’t tight around the penis, so it presents a welcome alternative sensation.

Perhaps most important is the fact that often many heterosexual women feel like they have to rely on a male partner to use a barrier method. In an ideal world, we could always trust the person we’re sleeping with to be responsible when it comes to protection, but accidents happen. Some condoms come off during sex. Some partners don't put one on, or don’t feel it break. While the female condom may not be perfect, it gives women another option to take charge of their own safety.

4. It’s available over the counter!

The other woman-initiated barrier method, the diaphragm, is available by prescription only. Of course, the male condom is also available over the counter, as are spermicidal lubricants. There’s also the emergency contraceptive pill, but that one is hormonal and unfortunately still fraught with controversy, as some pharmacists will refuse to sell it.

All brands of the female condom can be used with oil and water-based lubricants, so feel free to pick some of the sticky stuff up on your pharmacy run.

Admittedly, there are some female condom-for-pleasure tips that sound a bit ridiculous. For example, the FC2 website suggests a “show and tell”, wherein a partner watches you insert the female condom. Watching as a woman tries to insert a slippery, rubbery ring on the first try hardly sounds sexy, (this is especially true given the position the website recommends you assume for optimal insertion), but the other pleasure tips suggested aren’t half bad.

One of the more exciting benefits and pleasure enhancers is the fact that the female condom allows for extended post-coital cuddle time! Since it's held in place by the vagina and hangs outside the opening, there’s seriously decreased risk of pregnancy if it stays in for a little while after the action ends. In fact, the female condom staying in place doesn’t have much to do with an erection at all.

6. It can be used if you have a latex allergy!

All female condoms are made of a material called nitrile, which is also found in medical exam gloves. In fact, you may have come into contact with the stuff already while undergoing your semi-annual day of relaxation in the stirrups.

If you’re after a barrier method that doesn’t contain latex, add female condoms to your list of options.

There's lots more info on female condoms at any of the linked websites, so go have a peruse! After all, the more you know...

Global Female Condom Day is September 16th. Find out how to join the Dance for Demand movement to increase access for the global community!