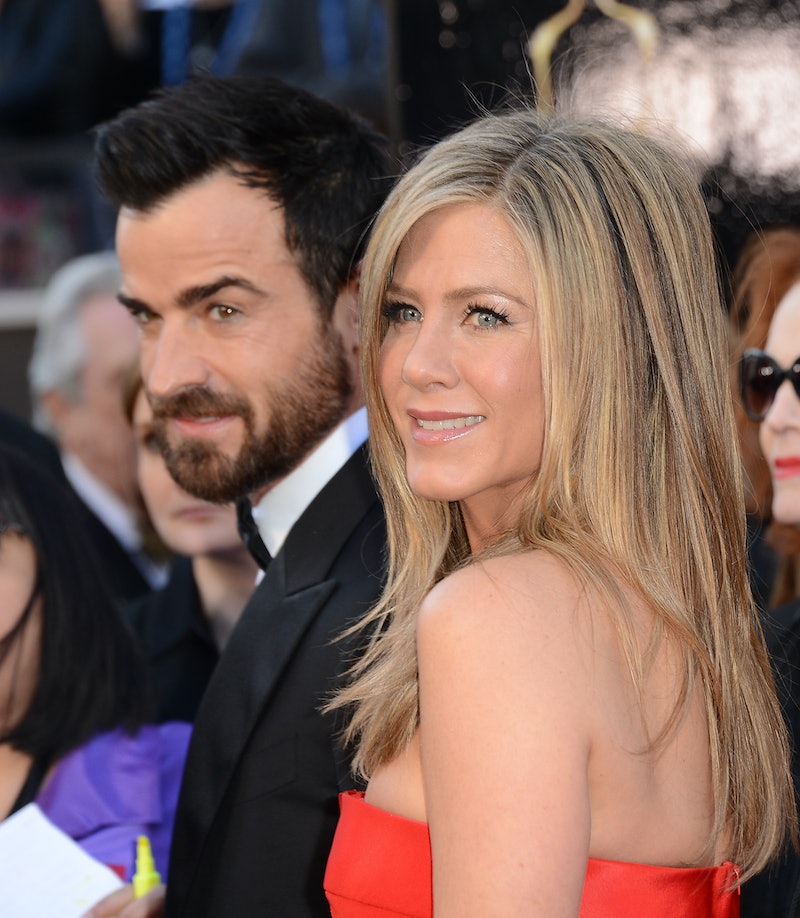 When I start to wonder about Jennifer Aniston and Justin Theroux's wedding date, I usually hear the question as if my nosy aunt's asking about them. "When is that nice girl going to marry already? She'll lose him if she makes him wait too long!" Which is definitely an old farty thing to say, but it is what the media starts to sound like when we speculate on these two. Of course, I get that many of us are on the lookout because we want to make sure we have enough remaining vacation days for when we finally get that save the date in the mail, but as far as Aniston's concerned there's no rush. When asked by the ladies of The Talk if her wedding was off, she responded, "There was no wedding planned."

Well, that definitely matches Aniston's go-with-the-flow sort of attitude. She went on to say, "It's not interesting that we're just really happy, and in love, and feel like we're married." It's no surprise that they already feel committed with having successfully balanced their coastal-ly divided relationship. Though, I admit that I’m a twee bit antsy because, I’m secretly hoping for a mini Friends reunion at her reception. Luckily, I won’t have to wait long seeing as fellow Friends star Courteney Cox and her fiancé Johnny McDaid will also be tying the knot soon.

As silly as it sounds to wonder when Aniston and Theroux will be married, it's hard to not try to figure it out. After her marriage of five years to everyone's celebrity crush Brad Pitt ended in a very public divorce caused by Pitt's blatant infidelity with Angelina Jolie, doesn't it make sense people would want to see Aniston happy and settled? No, but also yes.

Aniston and Pitt started dating in 1998 and were married two years later, and Aniston's been with Theroux for about three years now, having dated since 2011 and been engaged since 2012. Clearly, the actress is taking a different approach to her relationship, and we certainly shouldn't nag her for taking her own sweet time to set a date.

We also seem to forget that Pitt and Jolie have yet to officially marry too. They've been engaged since 2005 and act practically married, but Pitt hasn't received even an iota of the flack Aniston does for merely being engaged. Maybe just feeling married is the new married for Hollywood. You just don't get the tax cuts.

Theroux and Aniston's laid back engagement has everyone tensely anticipating and sometimes doubting that a wedding will ever actually happen. As The Leftovers actor told Elle for their August issue,

I can’t get over how terrible the narrative is, just how poorly written it is. It’s worse than a telenovela. It’s so dramatic. Like, ‘They’re broken up, they’re together, they’re storming out, storming in, rushing out, rushing in.’ They make every celebrity look like a schizophrenic.

All of that noise isn't Aniston's style at all. A save the date might not be around the corner, but the couple is clearly happy as is. Aniston can ride out this engagement for as long as she wants. So to answer that nagging question about when Aniston and Theroux are getting married, no one knows. And that's just the way they would like it.