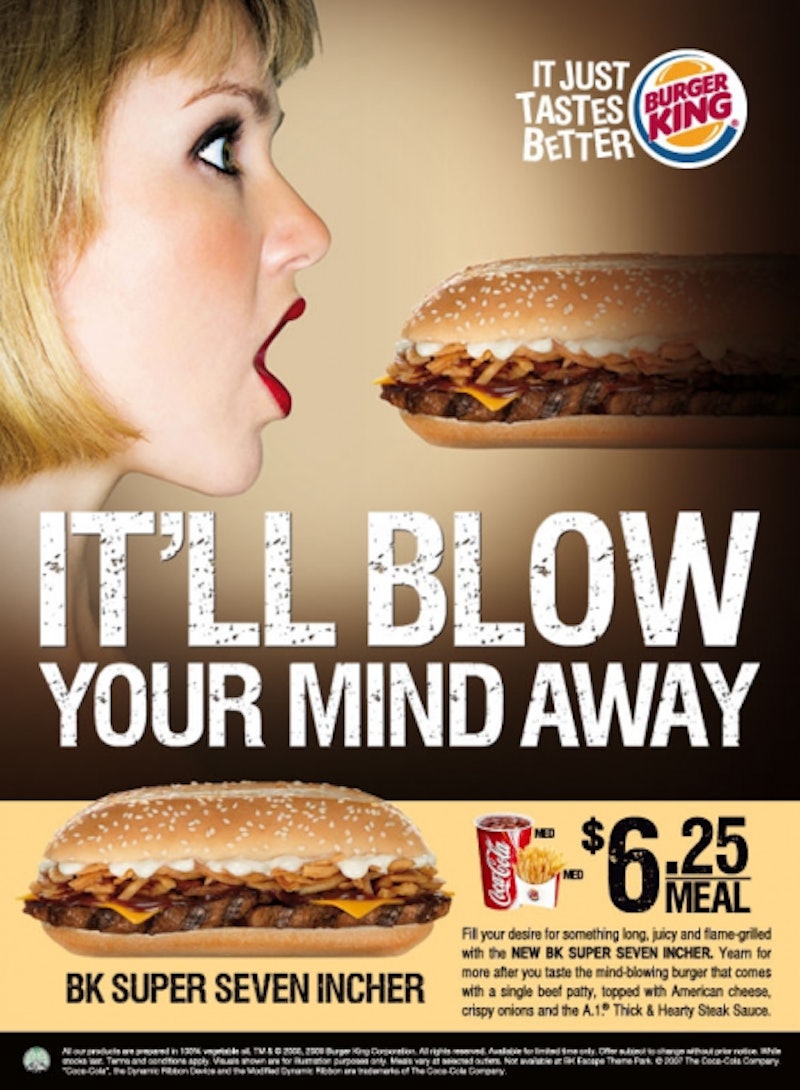 One of the world's most infamous sexist ads just got more disturbing. The woman in the Burger King "blog job" ad has now come forward, saying that they used her likeness in a problematic way — without her knowledge. Just when we thought that 2009 advertising campaign couldn't have gotten any worse, huh?

The ad, which only ran in Singapore, depicts a woman with her mouth open with a seven-inch sandwich poised to ram down her throat, with a slogan that "It'll Blow Your Mind Away." If you have any interest at all in the advertising world (or women's rights!), it stands as one of the prime examples of how to alienate half of your market and use them as sexual objects.

In a short video, the woman, who has not identified herself by name to the press, shows snapshots of a photo shoot that she did depicting different emotions. She includes the photo that was eventually used for the offensive ad, saying that she was never asked permission to use the photo or made aware that it was even being used.

She emailed the blog Copyranter last year to seek legal advice, telling them that she had just recently learned about the ad.

In the video, she rightly points out that it is hard to tell if this is an ad for blow jobs or a sandwich. The ad is made all the more creepy when you think that the woman who is featured as a wide-eyed pleasure object had no knowledge that her photo would be used in such a way.

Why not hire a model to pose with the sandwich?There is something VERY wrong with the fact that they felt entitled to do that to my face without signing a contract with me.I believe in sexual expression in art and the media; it's beautiful and necessary for a healthy society but IT MUST BE CONSENSUAL otherwise it's RAPE.

Though the woman notes in the video description that Burger King claimed that the ad went over well in its Singapore market, she goes on to say that, after some digging, The Advertising Standards Authority of Singapore received complaints about the ad, which led to an early pull.

Burger King found my photo online from a series I did of various facial expressions and contortion poses, and with no due regard to me as a person, profited off reducing me to an orifice for their penis sludge; publicly humiliating me in the process. It was shown online as well as on bus stops and the walls and place mats of their restaurant.When asked for comment from the press Burger King claimed the campaign went down well, however after some research I discovered The Advertising Standards Authority of Singapore (where it was released) received several complaints and the campaign had to be prematurely removed.

Would the ad have been completely OK if they had a model who had agreed to pose in such a way, with full knowledge of how her likeness would be used? Still a big NOPE. But when painting a woman in such a suggestive fashion, it would probably be better to have her permission rather than forcing her into it, which opens up a whole other facet into the most problematic ad ever.

More like this
These Cozy Outfits Look Expensive But Are Actually So Freaking Cheap On Amazon
By Emily Johnson
Hilary Duff Details Her "Horrifying" Eating Disorder As A Teenager
By Radhika Menon
All The Most Stylish Winter Wardrobe Staples You Can Buy On Walmart.com
By Jessie Quinn
Bustle Daily Newsletter: December 6, 2022
By Hayley Schueneman
Get Even More From Bustle — Sign Up For The Newsletter