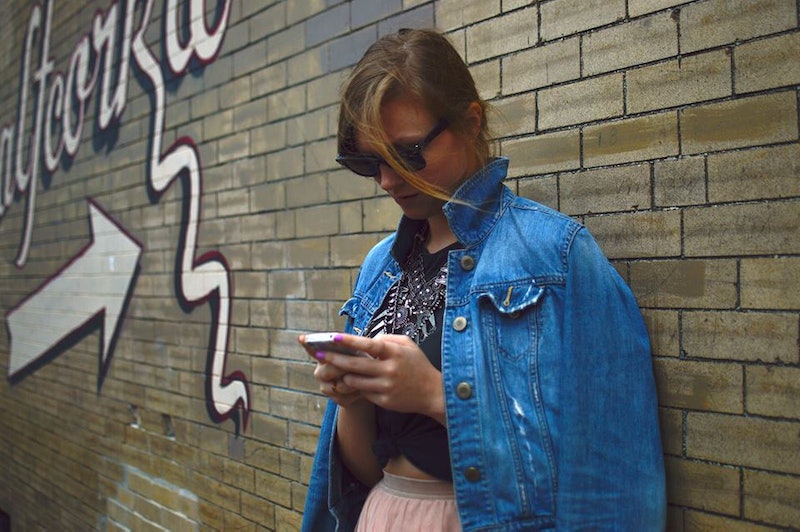 As we all know (but often don't admit) — our social media accounts are a far cry from an accurate portrayal of our day-to-day lives. Whether we're talking about Facebook, Vine, or Instagram, our realities are a little less perfect than we like to make people think. Hey, maybe you did do that juice cleanse, but I doubt you posted about the post-cleanse fast food-binge that, let's face it, is only inevitable. And that idea, in a nutshell, is how we use social media. We emphasize the positive to the point that the less-than-flattering details are overlooked.

While some might argue that Twitter is more popular than Instagram (or vice versa), the platforms are very similar in the sense that, more often than not, we're all trying to formulate just the right post that conveys the most ideal message — whatever that is for you. It's obvious that everyone has a different Twitter style, so to say. Some go for the witty, "why didn't I think of that?" one-liners, some strive to make their feed a sort of white girl, first world problems self-help book (I get how karma works without the continuous tweets, girls), and others opt to simply talk about the most positive, obnoxious aspects of their life repeatedly. Oh, you're going to spin class? You are the happiest you've ever been? Tell me more. Please.

As someone who is guilty of all of the above and more, it's only fair to address the reality behind some of my tweets, right?

I am a fashion girl that worships Beyoncé, I tweeted this because, obviously, I relate to some of the most powerful, successful women in the world because I, too, am wildly successful. I am my own Mrs. Carter. I am fabulous.

I was on a 11-hour drive home from vacation, and sing-screaming some Adele song, and feeling a bit out of control emotionally. As one does. I should note that this was directly after a personal rendition of Avril Lavigne's "My Happy Ending," but saying you wish you were Avril Lavigne just doesn't sound as cool as Beyoncé, guys. Let's be honest, we all know that any tweet mentioning Beyoncé is popular. Period.

Obviously, this quote is how I live my life. Would I have achieved my rock-hard abs or Real Housewives-esque toned arms if I had never said to myself "well, I have to start sometime" all those workouts ago? No. Of course not. I, obviously, have these quotes pasted around my room to motivate me to take on the world in a consistently positive and healthy way.

I rarely go on Pinterest, but I often do when I can't sleep late at night because I am craving some motivation or feel the urge to teach myself to make something out of quinoa and/or mason jars. I should also mention this is usually after I have just eaten something horrible. Like chicken nuggets or gummy worms in bulk. Maybe both. But rather than simply eat some fruit the next morning, I need to find some inspirational quotes, guys. "I shall start on my journey to accomplish something in the morning" or "Maybe if I post this, they'll all think I have actually already accomplished something." You know.

I am wildly successful. The Donald Trump of articles about selfies, if you will. A phenomenon. "How does she have time to tweet so much about eating pizza and have her articles published?" they will ask. Will I connect with you on LinkedIn? I don't know. I'm an exclusive, adult professional.

"Someone wants to publish my article in a text book even though I tweet so much about pizza? Woah." *Celebrates by ordering pizza*

I am a busy, on-the-move 20-something who drinks a lot of coffee because I have meetings, guys. Gosh. Do I have time for negativity? Of course I don't. I am like a hip, young, less buff Kelly Ripa. Negativity is for peasants.

I am almost definitely annoyed by some insignificant something in the world, which most likely will have no real affect on my life but it doesn't matter because WTF, dude. I am strongly resisting the urge to subtweet by tweeting something positive instead. It's kind of like a, "yeah, that girl said she didn't like my skirt and it really hurt my feelings actually, but POSITIVE VIBES ARE ALL I NEED, RIGHT? RIGHT?" thing. It actually kind of works, too. Also: I need much more than coffee and positive vibes in my life. Obviously, I need other things. Like ASOS. And sushi. And for people to like my selfies.

Casually poking fun at my constant, silly fear of living alone/being alone/walking down poorly-lit streets in a humorous, relatable way. Every girl loves some Elliot Stabler, am I right?

"But how do I actually avoid spraying myself in the face?" "Did I lock the door?" "If I wake up, and I realize suddenly that there is masked man hiding in my closet, should I run for the door or just immediately punch him in the balls?" "Or should I simply go straight for poking out his eyes? That's supposed to work, right?" "But maybe I should reason with him. They say it's good to relate to the more human side of your attacker, right?" "Oh my GOSH, that episode where the guy stalks Jennifer Love Hewitt's character for 15 years and she can't leave her house. WHAT IF THAT WAS ME?" "I'm turning on the light. I'm never sleeping again." "But, really, how does Elliot maintain his body at that age?" *Falls asleep after three to four hours of mild panic*

6. The "I Am Totally Unaffected By Negative Criticism" Tweet

I genuinely do not care about people who don't like me, criticize me, or make fun of my "ugly feet" on Facebook. I will use a sassy hashtag to emphasize my complete indifference to negative comments.

Texting my boyfriend and mom, "but, are my feet really that weird looking, guys? Maybe they are. I never even knew before now. How do celebrities handle people saying bad things on the Internet about them all the time?!?" Because, yes, I am clearly also, a celebrity. This is also a lot like the "wildly positive person" tweets.

Why hello, Twitter followers. I am intellectual. I read books. Never mind that I am spending the time to go on social media and announce that I'm reading a book instead of actually reading it. Disregard that. I am reading a book. I also sometimes listen to classical music while driving in the rain.

In reality, I didn't actually start reading Bossypants until the next day. I meant to read it directly after I posted this tweet, but got distracted and ended up crying and watching mid-century, British dramas on Netflix instead. However, Bossypants really is fabulous (now that I've read most of it).

8. The "I Am In A Good Relationship And You Should Know That" Tweet

Enjoying my blissful, perfect relationship that is both active, and loving. We don't just do normal, boring couple things like eat take-out pizza and watch episodes of Catfish. Of course not. We kayak. We are FIT. The couple that exercises together, stays together.

Given that my arms start hurting like 10 to 15 minutes into kayaking, and also that me getting into a kayak is something I would compare to a blind person navigating a Razor scooter through the woods, sometimes I am not so thrilled about our healthy water activities initially. So cuddling is also ok with me. Usually, at some point in the evening, we will both look at each other in a middle of a My Cat From Hell episode and agree to going to get milkshakes. I have zero complaints.

Avoiding subtweeting by admitting that there is something in my life that makes me want to subtweet, but also that I am unsure if it is wise or not to subtweet about the subtweet.

Pretty much the same thing. But also wondering why subtweeting is a thing for women in their 20s. I am thinking about subtweeting in response to a subtweet, and can't decide whether I should embrace my sassy side or take the high road and say nothing. Ultimately, I am proud of myself for resisting the urge to subtweet and give myself a pat on the back in the form of a snow cone or giant cookie. Self-control, guys. It's underrated.

Casually tweeting something that is both funny, yet somewhat true. Also referencing Grumpy Cat, which is always a good option.

What I Was Actually Doing/Thnking:

But really. That cat makes a lot of money. And, let's just emphasize the fact that it's a cat. But I digress. I wonder, is the tweet funny? Is it funny enough? Is Grumpy Cat actually capitalized? Like it's a real, first and last name? It's just a cat, for God's sake. For most, tweets that are jokes usually spend a while being typed and re-typed. For some, the joke is even tested in real life before hitting Twitter. For me, I feel like I'm going to end up tweeting a joke I said in real life and my friends will, naturally, think I am lame. Is the thought process rational? No. But oh well.

11. The "Picture Of Self Masquerading As Something More Important" Tweet

Casually exploring New Orleans on my vacation, wearing my new sunglasses, which I love. Obviously, that's the only purpose of the photo. It's not even a selfie. So it's cool.

Let's be honest, I cut off like five inches of my hair recently and I really like the opportunity to show it off. Plus, my mirrored sunnies are very trendy and I got them for only $10. I am VERY impressed with myself about this. And I felt the need to share. That is all.

More like this
Why TikTok's 15-Minute Cleansing Challenge Isn't All It's Cracked Up To Be
By Rebecca Fearn
Here Are All 703 Outfits Rachel Wore On Friends
By Kat George
Here’s How To Turn On Instagram Post Notifications
By Megan Grant and Alexis Morillo
The Correct Way To Start An Advent Calendar, Explained
By Kaitlyn Wylde and Jay Polish
Get Even More From Bustle — Sign Up For The Newsletter