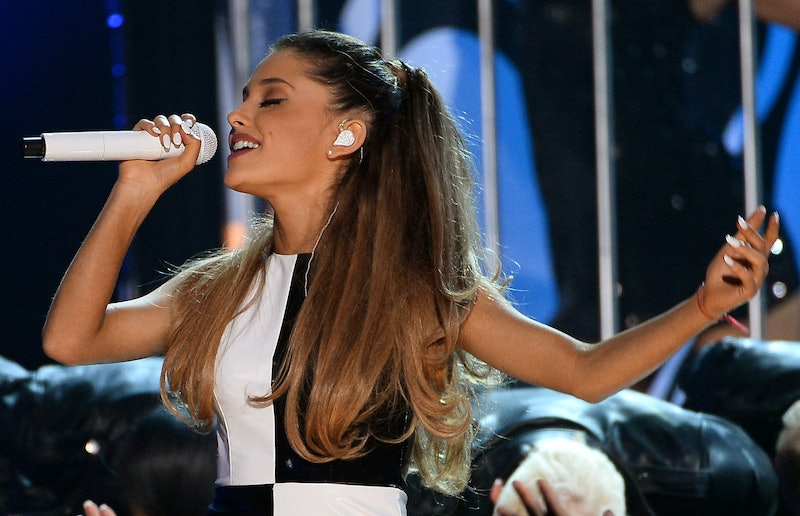 If you didn't already love Ariana Grande, then it's probably about time that you start. Grande's career took her from Broadway to Nickelodeon to superstardom and she's gifted the world with hit songs like "The Way" and "Problem", been related to Frankie Grande aka one of the best competitors on Big Brother season 16, and just generally been a complete joy to follow on Twitter. Now people who count English and correcting other people's grammar as among their list of likes should add Grande as well. Apparently, Ariana Grande fought against "Break Free"s grammatically incorrect lyrics so, apparently, we weren't the only ones cringing when we actually looked up the words.

Although she claims this makes her a 90 year old, I feel Grande's pain. The lyric she's referring to is the memorable line from "Break Free" that goes "now that I've become who I really are". Ouch. Even someone with only a casual knowledge of grammar knows that hits the ear wrong. Clearly if Grande were to co-produce a lot of popular songs then we wouldn't have to silence our inner editor in order to listen to them. Here are a few grammatically incorrect lyrics that Grande could have taken a red pen to.

"New York, concrete jungle where dreams are made of."

Correction: "New York, concrete jungle that dreams are made of."

Song: "Get Me Bodied" by Beyoncé.

"When you cheated girl, my heart bleeded girl."

Song: "What Goes Around" by Justin Timberlake.

Correction: "When you cheated girl, my heart bled girl."

"And yes of course we does, we running this town just like a club."

Correction: "And yes of course we do, we're running this town just like a club."

"You and me could write a bad romance."

Correction: "You and I could write a bad romance."

Correction: "If I were a rich girl."

Correction: Come on, that's not even how you spell tasty even later in the same lyric.

"As time goes by, you will get to know me a little more better."

Song: "I'll Never Break Your Heart" by the Backstreet Boys.

Correction: "As time goes by, you will get to know me even better."

"Wild childs, looking good, living hard just like we should."