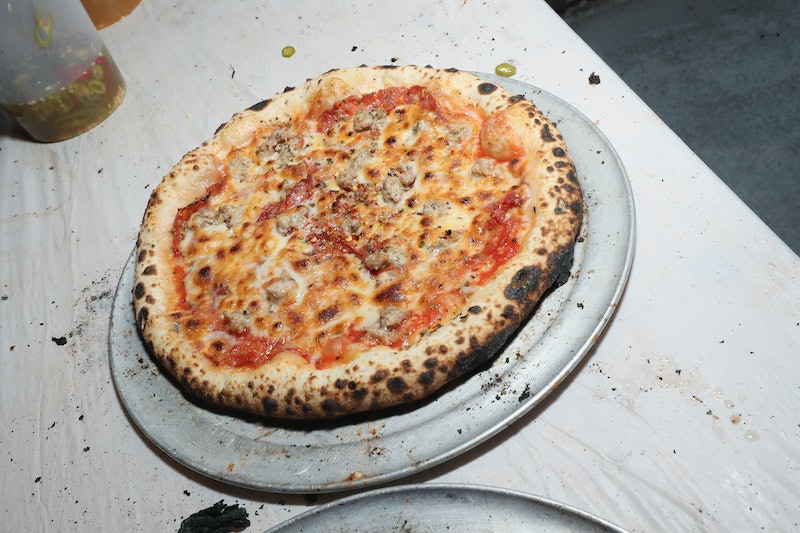 Washingtonians have serious beef with a new app that streamlines lazy pizza ordering. After its launch on Tuesday, the masses rose to Twitter fury when the Push For Pizza app left out D.C. as a state. Push For Pizza, let me tell you something very important: Do NOT call them Virginians. It won't go down well.

Push for Pizza is a profoundly simple name for a profoundly simple app. Created by five Brooklyn teenagers (yup, you read that right), Push for Pizza pops up with a pizza button that you press, then it presents you with a list of pie places that you order from. Your credit card information and address are saved into the app for even easier use next time, and tip is already included for the driver. Then, 20 to 40 minutes later, a pizza is delivered to your door! Simple as that.

Right now the app only has cheese pizzas available, but it is quickly going to expand its choices to include more pizzerias and topping varieties for its next app update. At least that was the plan, before the good people of D.C. lost their shit.

So what's the deal? Does D.C. hate pizza? If there is a city that collectively hates pizza, it probably doesn't deserve to exist. No, residents of the District of Columbia are upset because of this:

Do you know whose address that is? The PRESIDENT OF THE UNITED STATES OF AMERICA. So what the little teenage shits behind Push for Pizza are saying is that is the president wants to order pizza his state his not valid?!

They did offer a solution, though. The founders tweeted that using a D.C. zip code but entering VA for the state would do the trick. As you might imagine, the good people of D.C. did not take too kindly to that.

After some pretty severe backlash, they recognized their mistake. Now you can type any state with a D.C. zip code and it will work. No angry replies to that one (so far).

So instead of aiming for an update in the next few months, the founders are trying to push something out in the next week that will tell people who have entered D.C. in the address field to update their version of the app. Save the updated toppings for later, apparently those D.C. people are nasty when they turn on you.