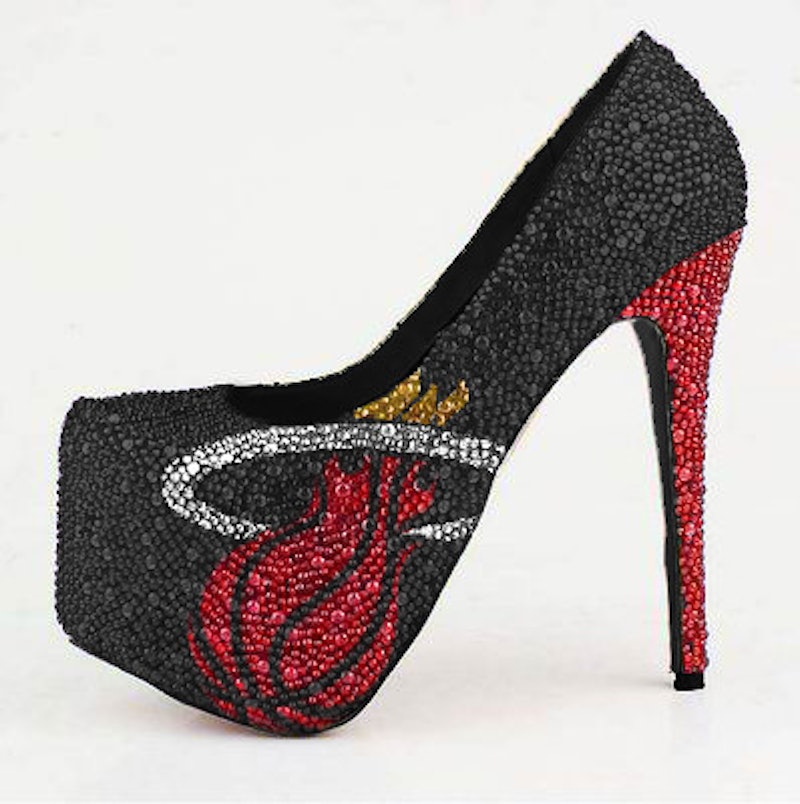 I have somewhat mixed emotions regarding sports. Baseball bores me, soccer confuses me, and, as far as I'm concerned, this year's Super Bowl might as well have just been a Beyoncé concert. But I love basketball. I grew up in South Florida going to Heat games with my dad, and it's still something we do whenever I'm back home. With the Heat in the playoffs, I've been spending the majority of my week at my favorite Brooklyn sports bar, eating greasy food, drinking beer, and cheering my team on. Like any good fan, I try to show some pride by wearing the Heat's colors, and, because I'm interested in fashion, I try to do so in a stylish way. The other night, for instance, I wore white high-waisted shorts, a white crochet top, and my Heat snapback, only to have one of my good friends look me up and down and say, "You look like a fake fan."

I knew that he wasn't trying to offend me, but I immediately got defensive. "What's a fake fan?"

He shrugged. "You know. One of those dumb girls who pretends to like sports to get with dudes who like sports."

I opted to not continue with a conversation I knew would upset me (especially when I already had enough to make me mad, what with the Heat losing), but I did spend most of the night thinking about my friend's comments.

Now, I don't think anyone (well, at least anymore worth listening to) would argue that there aren't plenty of women who really and truly love sports. Still, I've come to think that women are more likely to be called "fake fans" than men are. A large part of this has to do with how sports are branded to cater to the different genders. Victoria's Secret took full advantage of targeting female fans when they created the PINK MLB Collection and the PINK Collegiate Collection, both of which include fan gear adorned with rhinestones. You can also see this kind of branding in the women's section of any stadium's souvenir shop.

Wearing a shirt that says "Party in the Outfield" does not automatically make someone a "fake fan, but that doesn't mean there isn't a problem. It's great that companies are making items for women. It shows that sports are no longer just thought of as a "men's interest," and acts as a reminder that you can indeed wear rhinestones and be a Red Sox fan. However, it is frustrating when the options for women don't just promote the teams in a stylish way, but promotes them in a sexy way. I have no issue with the fitted tank tops I saw on my most recent trip to the American Airlines Arena, where the Heat plays. What I take major issue with is this Heat fringe crop top that I saw:

There is no male equivalent to this top being sold because physical attractiveness is not valued in men to the degree that it is with women. In men, the analog trait is strength. Consider how the praise that little boys hear the most is, “You’re so strong! You’re going to grow up to be so big and strong,” whereas little girls are more likely to hear, “You’re so pretty!” This is why the men’s section of any souvenir shop is filled with jerseys, sweatbands, and limited-edition sneakers, while the women’s section gets crop tops.

Of course, there is no set of rules for what makes a “fake fan” and what makes a real one. Just because someone wants to be seen as stylish or attractive does not mean that they can't tell you the stats of every player on the team. A woman in a bikini top wants their team to win just as much as a man is a jersey does. Still, dress is communication, and if the message that is being communicated is, "Look at what a sexy fan I am," that's a problem.