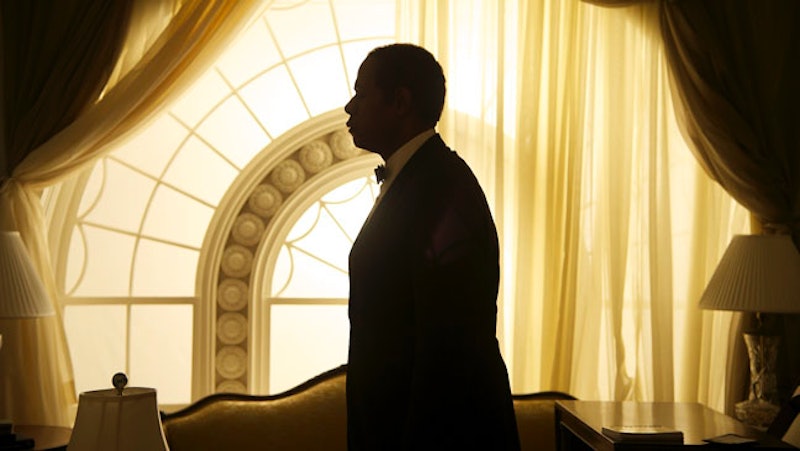 Lee Daniels, the director of Monster’s Ball and Precious, is notorious for his controversial films, largely in part because he isn’t afraid to talk about race. Unfortunately, some early critics of his film The Butler call his desire to open a conversation about race in America "Oscar-bait". But just because a movie is full of big names and covers a painful subject, does that mean it's not an important story to tell? In this case, absolutely not — the history of the race relations in America through the eyes of an African-American man working in the White House is, frankly, enthralling.

The Butler follows the life of Cecil Gaines, a character loosely based on the late Eugene Allen, an African-American man who was a butler in the White House under eight different presidents from Eisenhower to Reagan. Forest Whitaker plays a soft-spoken Gaines, the son of sharecroppers who was raised in Georgia who made his way to Washington, DC where he worked in a high-class hotel and eventually gained the attention of a White House staffer.

Serving in the White House for three decades, Gaines becomes witness to both sides of the political turmoil of the Civil Rights movement, and though remains outwardly politically neutral, he struggles to come to terms with his son Louis's (David Oyelowo) radicalism. Louis joins the Freedom Riders and the Black Panthers which enrages his father and causes conflict with his wife Gloria, played by Oprah Winfrey. This tension between father and son is a driving force throughout the film.

Though The Butler doesn’t premiere until August 16, many early reviews seem to take issue with the film’s vastness. Tim Grierson at Screendaily said the film “plays less like a personal epic and more like a glossed-over highlight reel of African-Americans’ long, difficult march to equality.” Katey Rich at Cinema Blend dismisses Whitaker’s Gaines as an “interesting historical footnote ... but a deadly passive figure.” Most of the reviews focus on the distracting nature of the celebrities playing the presidents (James Marsden as John F. Kennedy, Alan Rickman as Reagan) and the success of Oprah’s performance. But aren't they really, really missing the point?

I don't think The Butler is a movie for critics, but rather one to showcase the complexity, pain and individualism of the protagonist's history. In a candid interview with Marlowe Stern at the The Daily Beast, director Lee Daniels opened up about the filmmaking process and how it related to his own relationship with his son:

With my son, I hope I’m doing great strides for black cinema, but for my son, it’s not enough. He says, “I want someone my age—who looks like me—to be Superman, or be Spider-Man." Will Smith and Denzel Washington are actors of my generation, but my son wants to see a 20-something playing a superhero. So, he can’t figure out why I’m settling for this, and it’s incomprehensible for him to understand that we’ve come a very long way. It’s the same difference as what we’re dealing with when it comes to Cecil and Louis. It’s generational.

Obviously, speaking about and from a black experience is not something white critics can identify with. Many have called The Butler over-sentimentalized, which is downright condescending. But Daniels seems to have steeled himself against the negativity. In the interview with Marlow Stern, he is optimistic that African-American stories are being told at all. But the fact that The Butler has a black director is important, no matter how humble Daniels is about his role. Daniels mentions to Stern that he hated Django Unchained, a film that was a “black” story told by white director, Quentin Tarantino, and was lauded by critics.

But why does Hollywood value stories of black experience told from a white point of view more than those from people who have actually had the black experience? It’s a timely question, especially in the wake of the trial of George Zimmerman, who was acquitted of the murder of Trayvon Martin. Early reviewers of The Butler are suffering a classic case of Totally Missing the Point. Regardless if The Butler is good or bad, it's important that the film was made by a black director. Daniels is telling a story from a point of authenticity, and no critic can take that away from him.