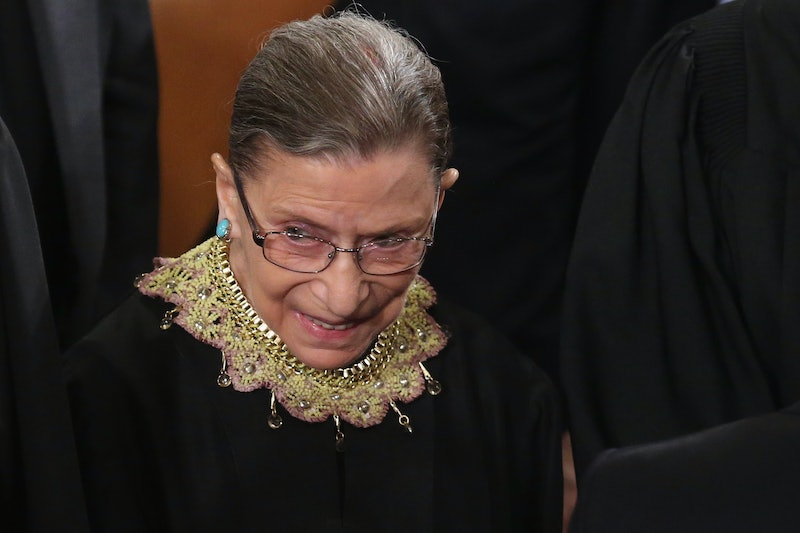 OK, I know there's been a lot of Ruth Bader Ginsburg love around these parts recently, but I can't help it — the 81-year-old justice is having a banner year in a time when women's health policy isn't. Sunday marks Ruth Bader Ginsburg's 21st anniversary on the Supreme Court, so in-between fuming over recent court decisions and draconian women's health restrictions, let's hear it for the Notorious RBG, who continues to keep it real on the bench.

While wearing her trademark specs, Ginsburg was sworn into the Supreme Court on Aug. 10, 1994, by President Bill Clinton. At the time of her nomination, Ginsburg was serving as a federal judge for the Court of Appeals for the District of Columbia, where she proved to be "one of our nation's best judges," according to Clinton. Although recently unsealed documents from the Clinton-era White House revealed the president's aids were wary of Ginsburg's progressivism and acerbic style, Clinton said in his nomination remarks:

[Ginsburg is] progressive in outlook, wise in judgment, balanced and fair in her opinions. Second, over the course of a lifetime, in her pioneering work in behalf of the women of this country, she has compiled a truly historic record of achievement in the finest traditions of American law and citizenship.

NARAL Pro-Choice America cobbled together a list of "21 shots" to celebrate Ginsburg's judicial anniversary. Some of Ginsburg's finest moments occurred before she donned her black robe and infamous bejeweled jabots, such as when she became the first director of the ACLU's Women's Rights Project, which she also co-founded, in 1972. That year was also pretty busy for Ginsburg: She became Columbia University Law School's first tenured female professor. Not bad for a woman who was once denied a judicial clerkship because of her gender.

Although she is well-remembered for her tireless defense of women's rights in the early days of the women's liberation movement, Ginsburg flourished on the Supreme Court bench. As the second woman to be appointed to the high court, Ginsburg has defended not only the reproductive rights of women, but also the abolition of sex discrimination in the workplace.

Ginsburg's outspoken advocacy for gender equality has gained her a fair share of critics over the years, including the pundits over at Fox News, who most recently called the justice a "misandrist." However, her work and spirit have also given her thousands of supporters, and her most recent court writings have cannon-balled Ginsburg to Internet fame. In the twilight of her career, Ginsburg has found a new audience in young women, many of whom are discovering the sharp-talking justice for the first time.

The state of women's health policy in America may look bleak right now, but here's how we can say "Happy 21st" to the incomparable Ruth Bader Ginsburg.

Thank you, RBG. We'll be breaking out our favorite jabots and raising a glass.