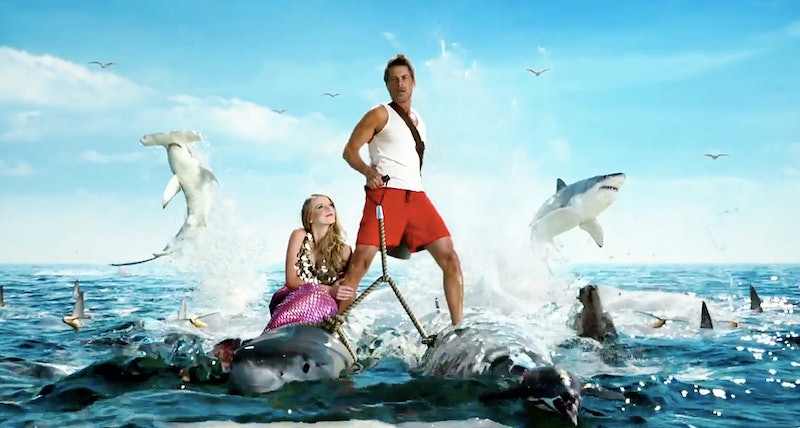 Though I try to live every week like it's Shark Week, the time has actually come. Shark Week 2014 begins Sunday night, and there's been a lot of hype, with a Rob Lowe trailer and a bunch of excited celeb tweets. However, my hopes are not high for this year's Shark Week. The first promo already had me worried, and the schedule confirms my worst fears.

Shark Week 2014 seems to have forgone real shark footage for speculation and myth. Almost all of this year's specials involve tracking down legends. There's "Lair of the Mega Shark" (Tuesday at 10 ET) which journeys to New Zealand to try and find a Maori legend. "Alien Sharks: Return to the Abyss" (Tuesday at 9 ET) attempts to find bioluminiscent sharks. "Monster Hammerhead" (Monday at 10 ET) tries to confirm the existence of a giant Florida hammerhead. "Air Jaws: Fins of Fury" (Sunday at 8 ET) tracks down the mega-shark Colossus, while "Shark of Darkness: Submarine Returns" (Sunday at 9ET) does the same for a legendary great white called Submarine. And then we have "Megalodon: The New Evidence" (Friday at 10 ET), which apparently builds upon last year's controversial fake Megalodon documentary. Now, it's possible that some of these missions will be successful, but I feel that there will be a large amount of diagrams, speculation, and fake footage.

I know it must be hard to come up with tons of original shark footage each year, but the amount of filler that appears to be coming our way this week is ridiculous. I'll probably still watch, but I'm pretty prepared for disappointment. I want less fluff, more fins.

More like this
Another Side Of Rupert Grint
By Maria Sherman
Pamela Anderson’s Dating & Marriage History Could Be Its Own TV Series
By Jake Viswanath
Owen Thiele Asked Sundance Attendees About Films That Don’t Exist
By Grace Wehniainen
Jennifer Coolidge Hunted For Jewels & Lashes In J.Lo’s Hotel Room
By Jake Viswanath
Get Even More From Bustle — Sign Up For The Newsletter
From hair trends to relationship advice, our daily newsletter has everything you need to sound like a person who’s on TikTok, even if you aren’t.