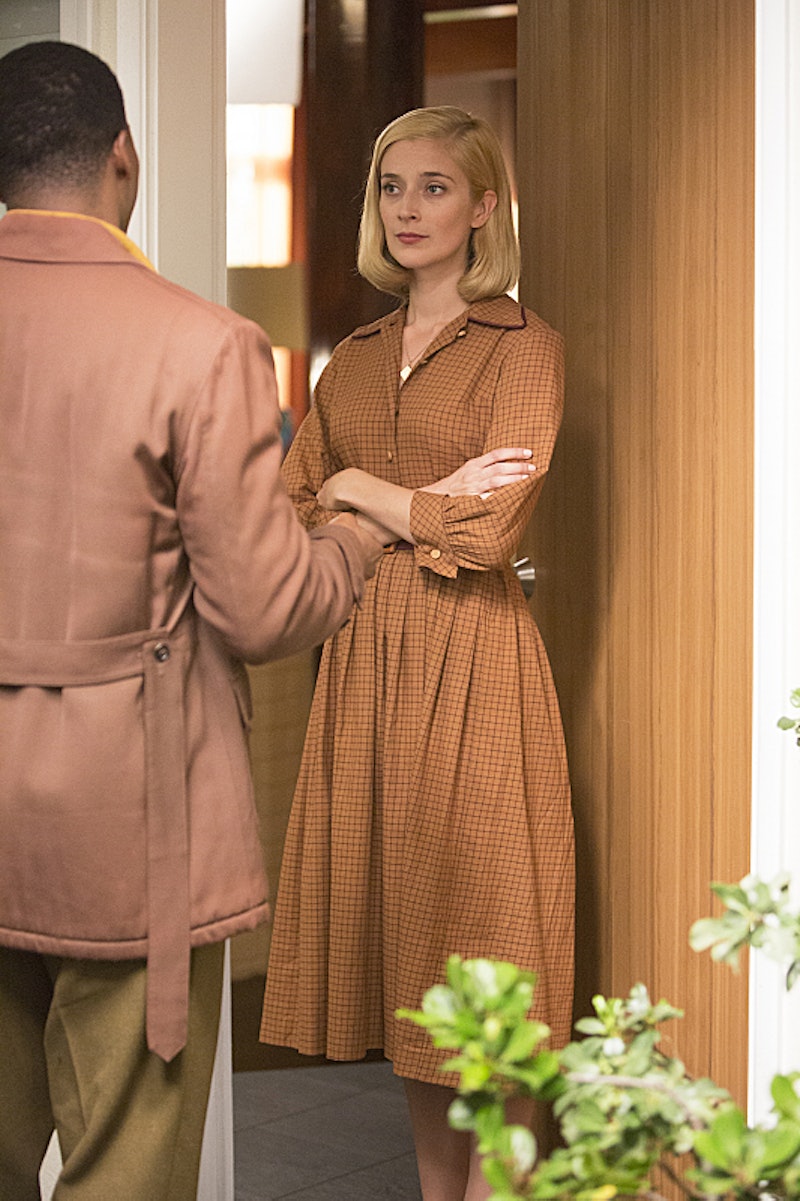 Things are never dull when it comes to Masters of Sex and its love of asking the tough questions — that is when it isn't delivering some quality fast-paced plot. But this week, the show managed to bring us both. The new episode, "Giants," focused on power dynamics, and how they can shift — which naturally led to plenty of suspenseful moments and gripping plot points. Because clearly this show knows what we love.

It seems everyone was navigating power dynamics this week, even Betty, who's old lover Helen strolled into her living room and started chatting with Betty's rich husband, proving that Helen can clearly upend Betty's life any time she wants. But what seemingly started as a way to lash out and cause Betty pain turns into a kiss in the powder room while on a double date, and who knows where it might go from there.

Meanwhile, Bill manages to abuse authority left and right. As the only white doctor in a black hospital, he wastes no time in making demands: a large office (which he still thinks is too small), a dedicated exam room (that used to be someone else's office), and a formal contract for Virginia (something the hospital never does with their other support staff). Of course, Bill always seems to expect to be catered to, given his huge ego. But now that he's in a black hospital, the power dynamics are rather different, and it shows.

Perhaps his even more outrageous power trip, though, comes when he informs Virginia that her "participation in the study" (which is the sort of euphemism for "sleeping with me" that only Bill Masters could come up with) is mandatory if she wants to keep working on the study. Virginia, who's been burned too many times, tries to use her current position with Dr. DePaul to gain some leverage, but to little avail.

Yet once she and Bill do land back in the familiar hotel, things do get more interesting. Though Bill is being a jackass and seriously making Virginia's consent murky, given that he's essentially saying she has to sleep with him or she's fired, Virginia turns the table by giving orders. She has Bill strip, watching primly with her clipboard, then orders him to masturbate while she times him with a stop watch and asks clinical questions. By the end of the scene, she has him naked, on his knees in front of her, giving her oral while she remains fully clothed, in a total subversion of how such a scene is usually depicted. In other words, though Bill is being awful, Virginia can navigate power dynamics to her advantage just fine.

But the most interesting power dynamics in this episode revolve around Libby's storyline (which has to be the first time Libby won "most interesting" anything). After last week when Libby decided to be absolutely horrid and order Coral to let Libby shampoo her hair, Coral's boyfriend Robert shows up at the Masters' home to tell Libby that he knows about the incident and that she had best not try anything like that again. It's a thinly veiled, but fairly mild threat — after all, as a black man, there's very little Robert could ever do to a white woman without getting killed. As power goes, she has pretty much all of it. But Libby, full of 1950s prejudices, doesn't see it that way, and is clearly rattled.

And yet when Libby tries to use the incident as a way to lash out at Coral once again, Coral turns the tables. Libby reads Coral a speech about how angry Robert seems and how he's clearly not a good person for Coral, who she says had best break it off — and since Coral doesn't have a mother, she really ought to listen to Libby, after all, since Libby is a woman of the world who knows these things. It's pretty clear this is just Libby trying to exert dominance over Coral once again because everything else in her life seems so out of control. But Coral, instead of taking it, just leans in and starts talking about how Robert might have a temper, but the sex, oh man the sex.

Buttoned up Libby is clearly uncomfortable, and Coral goes for the kill by finshing up by saying that Libby probably understands all about that stuff "being a woman of world and all. And once I'm finished making Dr. Master's bed, should I make yours too?" Go Coral!

By the end of the episode, Libby has tried unsuccessfully to try the "resolve arguments with sex" approach and gotten nothing but really awful sex in return. And when she tries to complain about Robert to Bill, he tells her that if anyone had done to her what she did to Coral, he'd have done more than stand on a porch and threaten. You almost feel sorry for Libby. And then you remember the scene with her shampooing Coral's hair.

But the biggest power dynamic in the episode is one much bigger than any of the characters: institutionalized racism. Bill's move to the new hospital is met with plenty of cancelled appointments, patients who are worried their cars will be stolen, and even a fight in the waiting room after a normally sweet husband accused a black patient of "bothering" his wife.

Yeah, as power dynamics go, racism is one of the top contenders, but even this one, the episode says, can be shifted. The hospital administrator who brought Bill on informs him that he's determined to integrate the hospital, and he's not interested in baby steps. He wants Bill Masters and the positive stream of white patients that comes with him. Because he's not the sort of man who wants to wait for change until people are comfortable, and he's decided that Bill is that sort of man, too, what with his love of showing pulsing vaginas to scandalized auditoriums. Because power dynamics, as this episode shows us, are never set in stone.