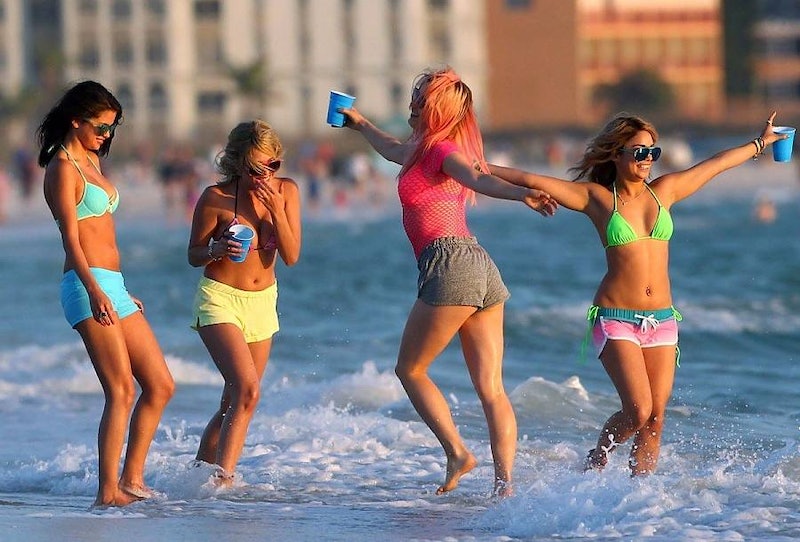 I was poking around on the internet the other day, looking for cool and interesting stuff involving ladies (as I do, since it's my job and it's awesome), when I came across a Kickstarter campaign for a book called Booze For Babes. Written by Kayleigh Kulp, this guide to spirits for women aims to "blow the lid off of the women-don’t-know-Jack Daniels-about-liquor stereotype," complete with recipes, tips on how to avoid shady marketing ploys and more. As someone who's always enjoyed a well-made vodka tonic, I was intrigued. So, I talked to Kulp about her book, the stigma surrounding women who enjoy drinking and the secret you never knew about cinnamon.

BUSTLE: So, why a guide to booze for women?

KAYLEIGH KULP: I used to be very lost when it came to liquor. There were only dumbed down cocktail books, those reference guides for the experts, or niche spirits books and nothing in between. So I realized there was a gap there for a comprehensive starter manual with useful information I could use on an average evening, and that would include lots of fun tidbits and facts that make people not just spirits encyclopedias, but smart consumers of booze. And for the women part, I had begun to figure out why I had been such a lost liquor soul, and attributed it to the marketing of pre-bottled cocktails and flavored, subpar products to us. Plus, I found out there was this whole social/gender role thing going on throughout history that set boundaries for women in the barroom. So that's why I targeted the ladies.

Why do you think it's important for women to have knowledge about spirits, like whiskey?

Well-made spirits are an affordable luxury for people who already savor good food and wine. Plus, what you drink says something about you, just like the company you keep, the clothes you wear and the way you speak. Women should drink what they like, and I'm afraid that the marketing to us, has kept us from knowing exactly what's out there. I should tack on about what you drink saying something about you — that a woman who can appreciate a scotch neat, for example, is put on a more equal playing field in a business meeting than if they choose a raspberry martini. It shouldn't really matter, but it's true. And plus, scotch is a great, dynamic and interesting spirit with a storied history worth appreciating. It's refined and it's worth knowing about and drinking, anyway!

What (or who) do you think is responsible for the stereotype that women prefer to drink Smirnoff Ice or strawberry daiquiris rather than an aged tequila or or scotch on the rocks?

I think it's marketing by spirits companies, mostly. We've been taught that that's what we're supposed to drink, and that men and women are supposed to have different drinks. I think some women have never thought much about whiskey or tequila, and I think bartenders definitely steer women toward fruity and sweet drinks. Happens to me all the time.

Do you think there's less stigma about women in the beer and wine worlds, respectively, rather than in the world of hard liquor?

Definitely. But the problem definitely exists in beer too. Look at some of the flavored beers on the market and see if you ever see one in a dude's hand. Women have become a huge buying force in wine, and wine drinkers are a captive audience for me. I always say, well, you probably didn't start out drinking full-bodied cabs as a new wine drinker, and spirits are the same way. You acquire tastes and hone your palate over time through education and tasting, and an adventurous spirit at the bar and liquor store!

It seems like every year, a new study comes out that says that college women engage in binge drinking just like college men do and everyone is shocked, like women are too pure to actually want to get drunk or enjoy drinking. It's a weird slut-shame-y double standard that annoys me, especially as someone who's always enjoyed drinking.

There has always been a double standard like that, that women don't belong in the bar and that those who do engage in drinking are floozies, etc. That goes back hundreds of years. And no one thinks twice when men do it. That being said, it's really important to educate not only women, but all people, to drink responsibility and comfortably. I address the effects of heavy drinking on women in my book and emphasize that you shouldn't overdo it.

What's the coolest thing you've learned while writing your book?

There are so many cool things I learned. But one of the more interesting things was when I started exploring sweet versus bitter tastes. Did you know that cinnamon and vanilla are inherently bitter, but because they are associated with so many sweet foods that they trick our olfactory system into thinking something is sweet? So I learned that something who is training their palate away from sweetness, you can add a cinnamon or vanilla element instead of sugar and feel like you got the same effect. I even add cinnamon to my coffee now instead of sugar!

Any tips you can give on liquor and drinking?

Ask tons of questions, trust your instincts, and step outside of the box every once in while. Exploring spirits is really fun, whether you're on vacation in a new place that makes a unique liquor, at a bar, or hanging in the backyard with friends. Make an occasion out of tasting special bottles and enjoying a spirit!

Is there anything else you'd like Bustle readers to know about you, your book, or women and spirits?

I am not trying to tell you that everything you like now is crap. But I do want you be armed with the tools and references you need to make informed buying decisions when it comes to spirits, to be able to pinpoint quality, and to open yourself up to the finer things. Men and women don't need different drinks!

You can preorder Booze For Babes through the Kickstarter campaign or on BoozeForBabes.com.