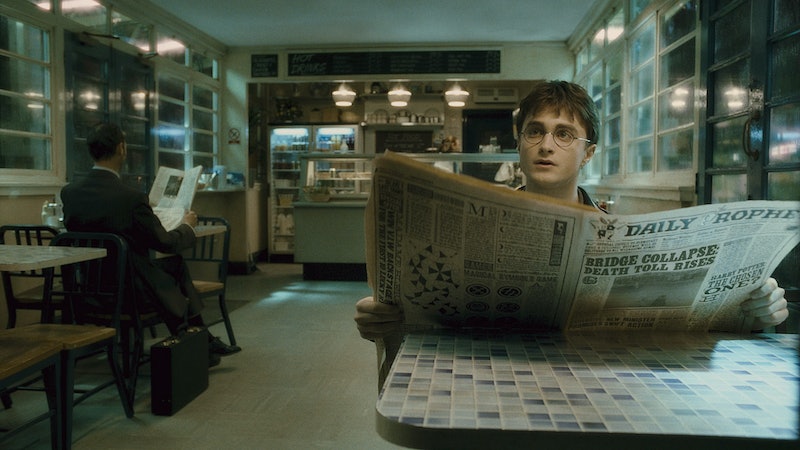 I've always been confused whenever actors say they don't watch their own movies and TV shows; sure, it's probably a little awkward to see yourself on-screen, but if the project's good, wouldn't the excitement of it all win out ? Apparently not if you're Daniel Radcliffe, who, despite the success and acclaim of the Harry Potter series, confessed that he hates watching himself in the films. All of them, he said, are filled with mistakes and moments he's not proud of, but none more so than Harry Potter and the Half-Blood Prince.

"I’m just not very good in it," Radcliffe told The Daily Mail. "I hate it... my acting is very one-note and I can see I got complacent and what I was trying to do just didn’t come across."

Say what?! I'm totally for an actor being critical of his/her own work, especially one who, like Radcliffe describes himself, grew up "in an atmosphere where everyone is always wanting to be nice." But in the cast of The Half-Blood Prince, he's just wrong. It may not have been his best performance in the Potter series, but even still, the movie is filled with strong, affecting acting from him, such as:

Awkwardly Flirting with the Waitress

Awkward Harry has often been the best Harry, and this early scene is no exception. Promising the Muggle waitress he'll tell her all about the "tosser" Harry Potter and then quickly checking for bad breath, the teenage wizard never seemed more, well, normal. Too bad Dumbledore had to come along and ruin it all a few moments later.

Poor Hermione. She had to deal with her idiotic classmates, a school full of non-Muggles, and the unrequited love of her best friend. Thankfully, she had her other best friend to lean on, and in this touching scene, the two teens affectingly commiserate in their pain.

Most of this scene is action, not words, but even still, Radcliffe manages to convey Harry's anger, confusion, and, later, guilt, perfectly.

Helping Dumbledore With the Horcrux

Dumbledore drinking the devastating potion at the cave is one of the hardest moments in the Half-Blood Prince to watch, due in large part to both Michael Gambon's and Daniel Radcliffe's performances. Harry's heartbreak and fear over having to feed Dumbledore poison is palpable, and the boy wizard's rarely seemed so lonely and scared.

Getting Through That Horrible First Kiss

No moment in the series is more uncomfortable to watch than Harry and Ginny's first kiss. The long, drawn-out build-up. The cringe-worthy dialogue ("I can stay hidden up here too, if you'd like.") The kiss itself, awkward and rigid and blissfully short. It's a low point in Potter, but a high for Radcliffe, simply for getting through it without cracking up.

I could understand, if not agree with, Radcliffe not liking his dramatic scenes in the film, but for him to hate his acting in the comedic ones? It's impossible. Harry Potter high on Felix Felicis will forever be a highlight of the series, regardless of what the actor thinks.

Although this scene is primarily a showcase for Tom Felton, Radcliffe more than holds his own with his shocked, horrified reaction to seeing his beloved mentor murdered. And then, later, when he tries to fight Snape in a fit of rage, and discovers that Snape was the Half-Blood Prince? Awful for Harry, but as for Radcliffe, it's one great moment after another.