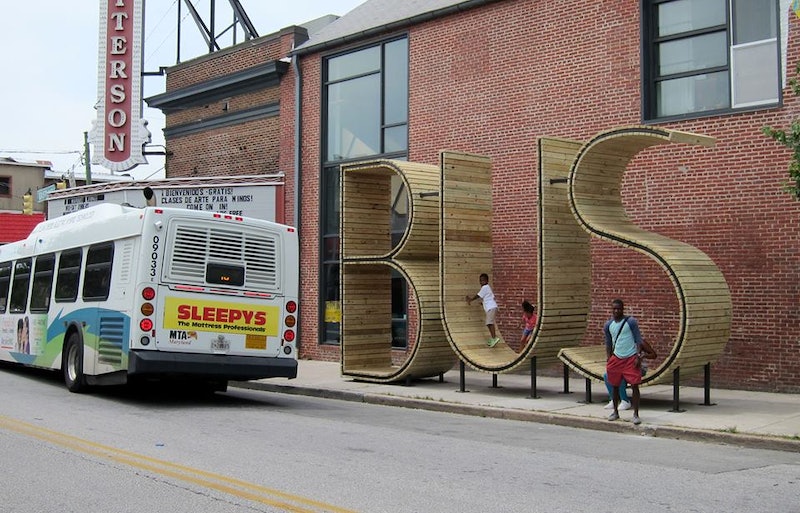 While some cities are creating anti-homeless bus stops, Baltimore is making your wait for a bus a little more friendlier. The Spanish artist collective Mmmm installed an "obvious bus stop" in the Highlandtown neighborhood. And based on that description, it's definitely achieved its purpose.

The part-sculpture-part-stop features giant, letters made of wood and steel that spell out BUS. Aside from being eye-catching, the letters are functional: Each letter can fit two to four people. In a description of the project on Mmmm's site, they note that the "B" can be a quick place to dive in when it's raining, and the curve of the "S" is a good spot to relax while you're waiting on your ride.

We rejected it because it was too obvious. After some months of working we were in a hole, the ideas we proposed weren't convincing for the community or to us, so we decided: Why not recover one of our first ideas? Why not make an obvious bus stop? And we did it!

The piece plays foil to the industrialism of city life, making a fun, inviting place for people to sit, with the materials mimicking "urban furniture." Ultimately, the designers wanted to create a way for people to interact and break the inevitable awfulness of waiting for a bus that always seems to be late.

Another plus to this design: With letters 14-feet tall and 7-feet wide, you never have to worry about missing this particular stop. I mean, really.

The Madrid-based Mmmm has done a bunch of cool community projects that transcend design and really dig into function. In 2011, New York's "meeting bowls" were basically like the Disney World teacups, but with a lot less spinning and way more interacting. The eight-person bowls were designed "much like a swing but one for adults," and designed to facilitate interaction and conversation. The group also conceptualized a worldwide "rape map," which allows victims to share the exact location of their attack and contribute their story.

So, in short, Mmmm needs to hit just about every city in the U.S. to make our commutes a little more comfortable in one way or another. Now, if only Mmmm could figure out how to make sense of LA parking signs, that would be a real artistic achievement.