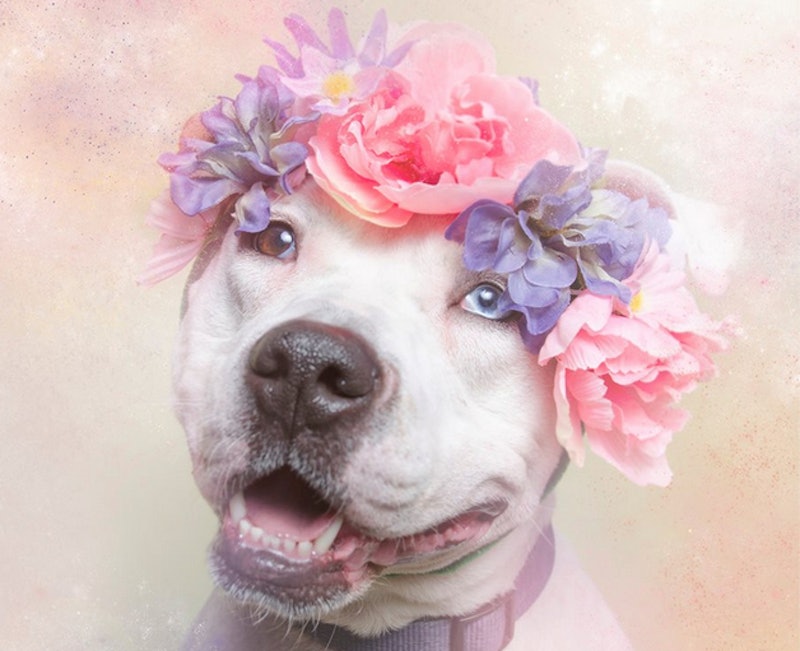 Gamand tells Co.Design that she was attacked by a herding dog when she was a 13, an experience that left her scared of large dogs. She has used her photography as a way to get over her fear by commonly working with canines. The Flower Power series is a project where she wanted to make the dogs look "strong and firm, but soft and loving" at the same time. On top of taking photos of the dogs decorated with wreathes of flowers, she also added layers of color and textures in Photoshop to aid in the ethereal feel of the photos.

The portraits are a refreshing portrayal of a dog breed often seen as snarling and mean. The personality of each comes through — some look extremely proud, others a little goofy, and one even has a little smirk on its face.

News reports of pit bulls on the attack aren't uncommon. But many people also overlook the stories of brave and kind members of the breed — just in July a deaf teen was saved by a pit bull that warned of a fire in the house. Sure, some of these dogs are aggressive (perhaps because their owners have trained them to be), but the whole group can't be characterized by the anomalies.

All the dogs featured in the series are rescues and available for adoption. One of the best parts of this project is probably the fact that people are inquiring about how to take in some of the models. Gamand has also started a social media campaign with #PitbullFlowerPower. She hopes to bring awareness of the pit bulls living in shelters and the 1,000,000 that are euthanized every year. Check out other photos from Flower Power on her Facebook page.