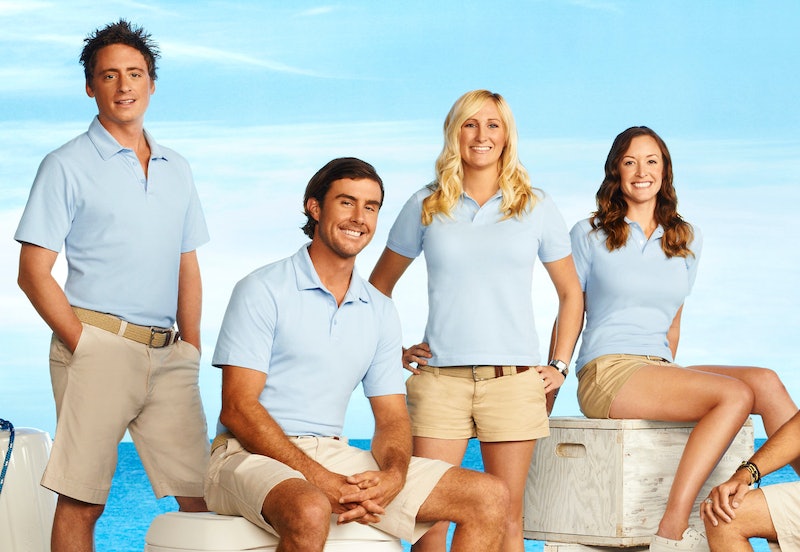 DRINKING. That's the first and most frequent note I took sitting through an hour of Bravo's new series (not newest, as they launch another one each week) chronicling the exploits of a luxury yacht crew. You've got the backdrop of immense wealth and privilege no Bravo show can do without, obviously, and the look at day-to-day boat operations is at least a little interesting. I, for one, would not have considered the kind of safety training needed for even a 3-day charter. So yeah, I learned something last night.

But ultimately "luxury yacht world" is a flimsy cardboard stage on which our players, each of whom is well trained in the art of reality TV performance, act out their premeditated confrontations and conflicts. Adrienne is a control freak. Kat is a drunk (well, they all are). Ben is a cad. The Captain is an "old asshole." On and on, cycling through the prescribed list of stock reality parts. They interact as they know they're supposed to interact. Ben, the cad, calls Kat a "demonic trailer park refugee" after she falls down drunk. A perfectly styled and executed put-down! You feel like you're watching the Max Fischer Players in summer stock.

...Which actually makes for a mojito-smooth blend of mind-numbing Drama enacted by drunk attractive people in a beachy atmosphere. (What is: Royal Pains with a measurable pulse?) Was this show created in a lab? Or as a reality TV mad lib? Either way it's exactly the thing to watch Monday night as you fondly recall your weekend of bad decisions at Señor Frog's.

But describing an episode of Below Deck by its plots is like acknowledging each paint mark in a pointillist masterpiece -- you're missing the full beauty in front of you. "Duffing a fire drill" does nothing to account for the larger examination of Millennial entitlement it evokes. Some old asshole reinforcing to a group of 25-30 year-olds their basic job responsibilities as they roll their eyes and try not to throw up (because of their hangovers)? THAT'S ART. Likewise the subtle criticism of hookup culture that follows Ben's very British remarks lobbed at Kat. On the surface is comedy as we've come to expect in these shows, a cutting remark; underneath is the sad desperation of an entire generation.

At this point it's unclear to me whether I'm talking out of my ass or truly believe anything written above, but that's Below Deck working its way through and rearranging every contour of your brain. Don't fight it. Just ready the crew and set sail.

Oh wow, see you next week.