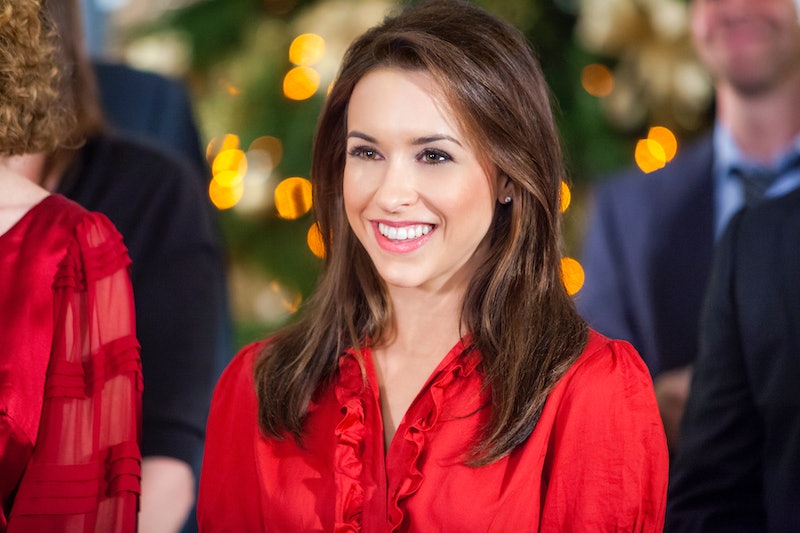 Lacey Chabert is starring in the first movie about Christian Mingle. Yes, you read that right, the actor known primarily for playing Gretchen Wieners in Mean Girls will be headlining a romantic comedy about a Christian dating site. We all know that Lacey has done a lot of great work since Mean Girls (hello, Liza Thornberry), but this still might shock those unacquainted with Lacey's faith.

Lacey has been upfront about her religious upbringing in the past, yet she's never been the most vocal about her current spirituality or personal life. Remember, she married her still-unnamed husband in a completely secret ceremony back in January, after attending Kaley Cuoco's equally-secret wedding. But now Lacey seems to have taken a bigger step in making her spirituality public by starring in a movie that begins by mocking Christian Mingle, but later touts "something greater" than finding love on the internet.

In the ten years since Mean Girls, Lacey has lent her voice to numerous TV series and video games (including Family Guy), and starred in a whole slew of indie and b-movies, ranging from teenage horror flicks to tender biopics. Some of her work has been very family-friendly, and a few movies have begun to broach religious topics, like her starring role in What If God Were the Sun? a film about "a grieving nurse [who] finds comfort and inspiration in her new assignment, where she meets a terminally ill woman with a quick wit and strong faith." Even if this sounds surprisingly spiritual, it's nothing like her role in Christian Mingle (the movie).

Christian Mingle begins with a tired rom-com premise: that there are no good men in [insert vaguely New York-esque city here], and the heroine is tired of being the only single gal in her friend group. Where most rom-coms would turn to a meet-cute, CM turns to a bald-face lie: Lacey's character pretends to be Christian in order to meet a cute, somewhat bland guy on ChristianMingle.com. She then goes through the steps of rom-com plot progression: meeting, falling in love, seeing him in a non-city setting (in this case, a church), revealing her dark side, and winning him back at the last second. But the twist ending to this otherwise-cliche chick flick is that Lacey's character finds...Jesus? Although she only says that Mr. Christian "opens her eyes" in the trailer, it's fairly clear that she finds faith through a man.

Beyond the obvious problem that individual beliefs probably shouldn't be passed down from romantic partners, this actually seems like a sweet way for Lacey to show her rarely-discussed religion. Although the movie itself will walk into every romantic comedy cliche, it's still nice to see another side of a star that has been in the industry for such a long time. Gretchen Wieners might not approve of Christian Mingle, but as a spiritual statement, it's pretty fetch.