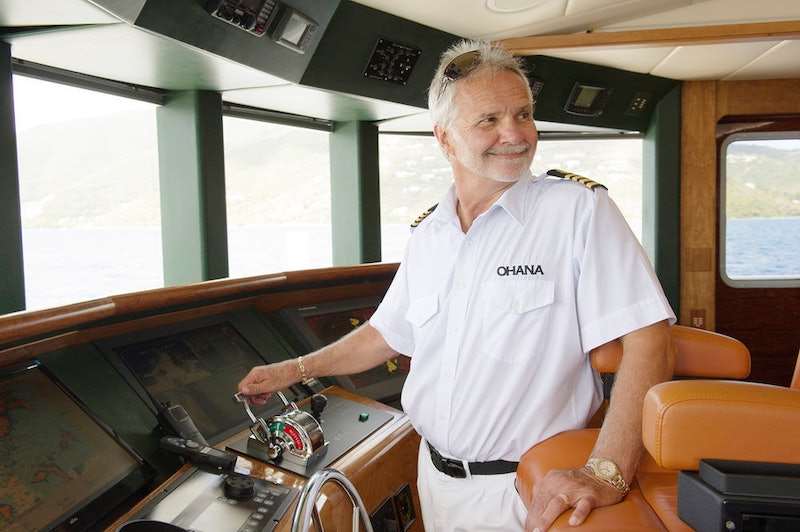 The only bad part about watching Bravo's Below Deck — and believe me, it's hard to find one—is the jealousy you feel over seeing the gorgeous yacht, complete with luxurious amenities, that the crew lives and works on. Of course, the members of the crew don't actually get to enjoy all that the ship has to offer since they have to please the yacht's guests at all costs, working pretty much like glorified servants. Oh well. Living vicariously is second best to experiencing something yourself!

But if you've got money to burn, or even if you don't, you may wonder if you too can take the yacht featured on Below Deck for a spin. This is a reality TV show after all where everything is supposed to exist in real life. Lucky for you, the Below Deck yacht is in fact real, and chartering it is as easy as writing an email or making a phone call . . . if you have dollah dollah bills, yo.

In the first season of the show, the crew worked on the Honor and traveled around Anguilla, St. Barts, St. Maarten, and Saba. Well, that yacht was sold, so this season of Below Deck, the crew will climb aboard the Ohana in the British Virgin Islands for another dose of nautical naughtiness. However, since the show wrapped, the Ohana, which means "family" in Hawaiian as Lilo & Stitch drilled into our brains, has been renamed Rhino. That doesn't sound as warm and fuzzy as "Ohana," does it? The Below Deck crew must have really done a number on this ship.

In fact, the Ohana was sold and refitted, or renovated, in 2014. The new owner of the yacht supposedly wanted to "distance RHINO" from Below Deck since it received some criticism for not accurately portraying the world of yachting. There may be some truth to that. For the first season, The Triton reports that producers chartered the Honor, whose original name was Cuor di Leone, for five weeks during the winter season and gave the real crew a vacation, with the exception of the captain, an engineer, and a mate. They cast crew members and guests willing to be filmed on the show. The casting application for season two is even still available online.

Now that Rhino has been spruced up with brand-new interiors and rebuilt engines, you can take it on a cruise around New England for the remainder of the summer. Or, if you're more of a planner, you can charter the yacht this winter and head for the Caribbean. Just remember that it's not going to be cheap. Charters start at $140,000 per week plus expenses for this yacht. That's a tad pricier than a ride on the East River Ferry in New York City, I would say.

But once you hear about the amenities on the ship, you know the price is going to be worth it. With five cabins that include one master bedroom, two double beds, and two twin beds, you can fit up to 10 people on this yacht. However, with so much to do on board, you're probably not going to get much sleep. You've got your gym equipment, your deck jacuzzi, and even a water slide, which will all keep the good times rolling for the guests . . . and the crew when nobody's watching. Just call up your neighborhood yacht charter broker, who works similarly to a travel agent (remember those?), and he or she can hook you up today.

Charter listings for the Ohana can still be found online. One of them says, "OHANA has a highly professional and very child-friendly crew of 8." Clearly, whoever wrote that has never seen Below Deck.